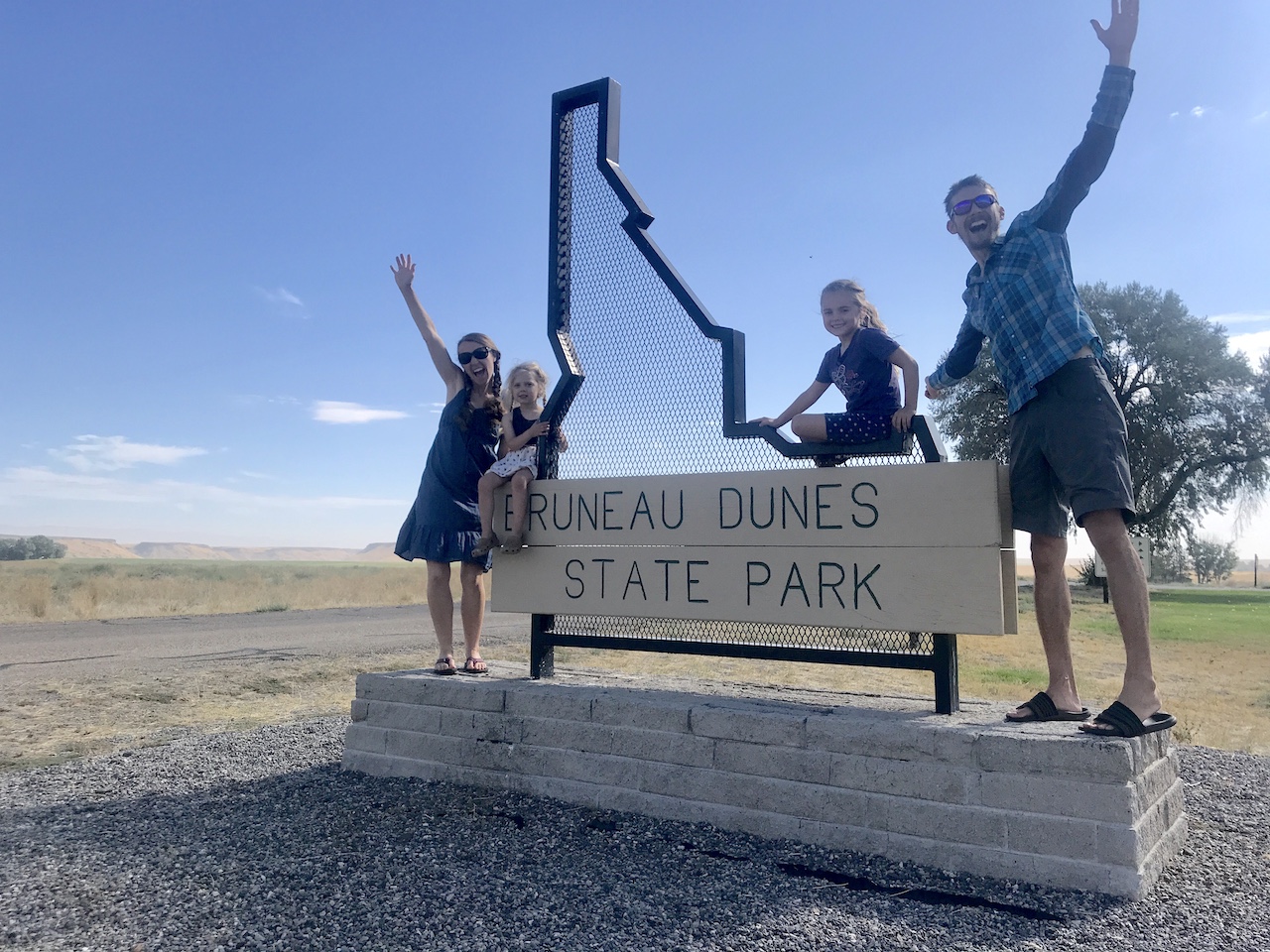 Bruneau Dunes State Park wasn’t on our radar at all. We needed a place to stay somewhere between Pendleton and Yellowstone, and we had chosen a different Idaho state park at random. However, on the way we saw a sign for Bruneau Dunes and on a whim we veered off our route and changed plans. It turned out to be a great choice!

On our drive from Pendleton to the sand dunes we all of a sudden noticed that we were getting really hot regardless of the AC being on.  At first we thought there was something wrong with the blowers as they weren’t pushing more than a breath’s worth of air toward the back of the van.  We fiddled with the vent selector which did little to nothing.  We noticed that it sounded as if the vents were on full blast but all the noise was coming from the front passenger floorboard.  However, we still couldn’t feel any air coming out.

As the temperatures outside climbed into the upper 90’s, the temperature inside Azul followed suite.  We had lost AC!!  Boy, you don’t know what a luxury it is until you loose it.   The girls had to use the bathroom anyway so we decided to find a place to pull over while Justin could research what on earth was going on.  The temperature in Azul was a little over 100* by this time. The 90* Wobbles felt like a cool breeze to us while we were using the bathroom.

I snagged the girls USB personal fans that live on their bunks and rigged them to cool them down from their seats in Azul.  We dunked the girls heads in water and used frozen peas as a means of cooling down.

Through his research Justin found that our AC unit had, on a 100* day, wait for it…FROZEN!  The intense blowing that we heard coming from the floor of the passenger side was the AC system using all the vent air to blow on the AC unit to thaw it!  Luckily we ALL had to go to the bathroom so it gave the unit enough time to thaw, leaving a puddle of water under Azul.  Apparently if you turn the AC temperature low at the same time as you have the vent on low fan AND are driving on a highway AND it is a hot day, this happens.  Ha!  Now we know.  Within the half hour after discovering this we had our glorious AC back!!  Woo!  Close one and how weird, right?!

We found a lovely little spot to camp at Broken Wheel Campground in Bruneau Sand Dunes State Park.  The aerial view of the sites make the shape of an old wagon wheel.

When we arrived there were only two other people at the campground which made for good pickings for the sites (and by our second day we were one of two). We chose a site nestled under a group of trees (which are rare in those parts) so we could get some relief from the scorching sun.

We also used those beautiful trees to set up a slack line and rings for us all to have fun on.

We learned quickly that the ground cover here was full of spikes!  Luckily there was a grassy spot under some trees where we could picnic without getting spikes in our rear!  They DO go through the blanket, as we found out.  Our oldest also just learned how to whistle with grass under these lovely trees!!

This site was so great but unfortunately the flies and moths were outstandingly horrific!!  You didn’t notice it so much when you were outside in the breeze but Azul was like a giant fly and moth trap!!  It was CRAZY!!  We made the mistake of leaving the doors open while we set up camp and it took us 3 days to recover from that bad decision.  The flies were annoying and gross but doable to swat.  The moths were a whole other story.  I of-course outfitted Azul and Wobbles top to bottom with wool accessories that I had made from Pendleton Wool scraps; a moth heaven!!  I found a whopping 9 moths inside the girls wool book basket in Azul.  I must have killed 40 or more in Azul over the next 2 days following our bad decision!  When our oldest and I came out to read her bedtime books we killed 13, (THIRTEEN!!) moths within minutes all feasting on our back blinds!  These were not just little moths either.  There were little ones too of course but the big ones that we could easily count were the size of quarters!!  I tell you, they were awful!  The next store we went to I bought sacks for us to store our wool blankets in.  I thought at the very least, save the blankets!!

Okay, more about the campground attractions… Just a short bike ride away from our site were the sand dunes!  We all were able to ride as a family which is so lovely!  It’s fun that both girls are so confident on their bikes and that I feel confident in them listening to directions and being safe.  I’m so proud of our two little bike riders.  They each carried their own food and sand toys with them in their backpacks and our oldest brought other essentials like her carving knife, first aid kit, sketch book and water with her.  Such little people they are now!

The sun allowed us to explore the dunes for only a short time before the sand became dangerously hot.  But in that time we had a blast!

We found an owl pellet which was exciting as well as a Pinacate Beetle to look at.  The number of critter tracks on the dunes was incredible!  We identified at least 3 critters and there were at least two more sets of tracks we were unsure of.  We found tracks for a sand beetle, kangaroo rat and lizard of some sort.  The beetle made the neatest tracks that looked like bike tire tracks with thick tread.

The girls had a blast on the amazing dunes.  These are said to be the highest single structure sand dune in all of North America!  The dunes are amazingly maintained by long-term wind patterns that create opposing winds that keep them intact.

It gets its darker color from the high density of iron in the sand.  Pretty neat, right?!  The girls also learned that sliding down on their buns seemed like a good idea until they found the sand in every nook and cranny of their body!  Oh sand!

Days were extremely hot but it did cool off in the night so the mornings were a cool 60*.  In the evening the outdoors became so very hot that we all took a break in the camper with the AC on.  Again, thank goodness for AC!  It was a nice change of pace to play with some putty and play dough for a while.