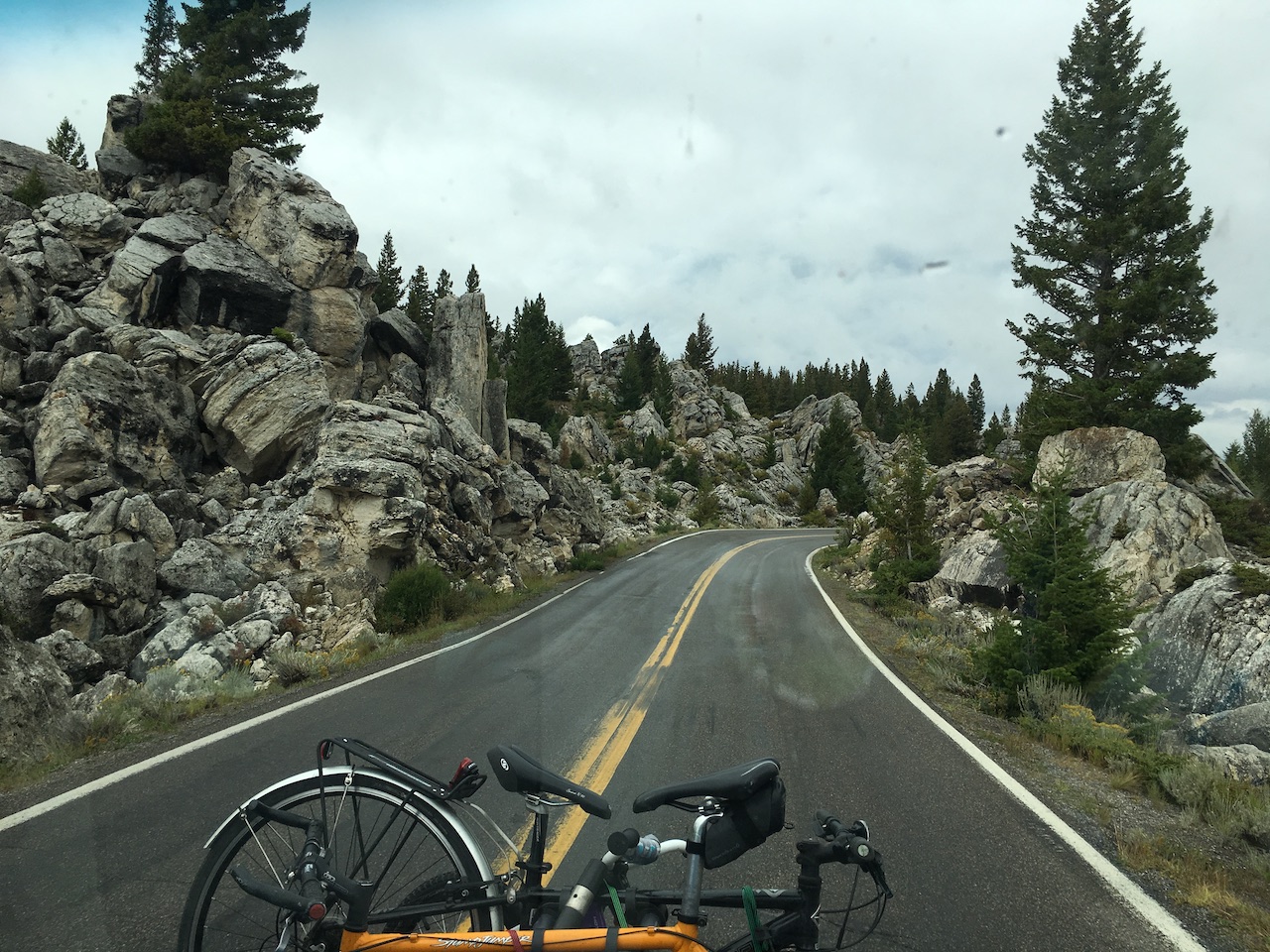 Our original Yellowstone plan was to camp on BLM land just outside West Yellowstone to let the weekend pass by, and then to head into Yellowstone on a Sunday to try our luck to snag a first-come first-serve campsite. However, when we woke up Friday morning to a rainy day, we thought “maybe the rain will keep the crowds away– let’s go!” It didn’t work out as well as we had hoped…

The plan was (I feel like a lot of my posts start with this phrase :P) to leave Bruneau Sand Dunes and drive 2.5-3 hours to Idaho Falls, snag some groceries before we enter the land of no fresh veggies (aka; National Park territory) and sleep nearby Idaho Falls.  However, the girls were doing so great in the car that we ended up driving about 6 hours so that we could spend more time just outside of and in Yellowstone N.P.

The van ride went surprisingly smoothly!!  Schooling was a success x2 and the girls were getting along great for the most part.  For part of the time we followed a giant truck full of potatoes!  And get this…the name of the truck was Spudnik!  Haha, so clever.

As I was planning for dinner, we decided we could use the electric feature of our solar oven and make some rice while we were driving.  We got it all set up and started it an hour before we wanted it as we found worked in prep cooking before we left Portland.  Brilliant plan right?  Except for the part that it didn’t actually turn on. 🙁 We checked on the rice about the time when it should have been done and what we found was watery hard rice.  Blah (it turned out there was a loose connection in the cord)!  So, Subway saved the day.  My oldest and I weren’t thrilled with the idea but as it turned out, we were super hungry and it tasted great!!  We all gobbled ours up and still had room in our tummies.

We ended up picking a BLM site (Bootjack Dispersed Camping) just outside Yellowstone’s west entrance figuring that we could stay the weekend there and pop into Yellowstone bright and early on Monday morning when we were hoping the crowds died down.  The BLM land was lovely with many woodsy and private sites throughout.

Funny enough, while Justin was scouting the sites on foot, we found some familiar faces!  A really sweet family we had met the previous year at a Full Time Families event was camping on the land as well.  It was such a nice surprise!!  Unfortunately, the other family was leaving the next morning as they had just stayed the last week traveling to and from Yellowstone from the BLM base camp.  They actually were headed to Portland of all places!!  What are the odds that we would run into them going completely opposite directions?  We let the girls stay up late to play with their kids and get some energy out after being in the car so long.

Because we chose to let the girls stay up late they (luckily) slept in a bit in the morning.  We woke up to rain which was a nice change.  Justin had been checking out the campgrounds at Yellowstone and discovered that their website tracks when the campsites fill up each day so people know if they should bother giving it a shot.  He found that most campgrounds didn’t fill up until the late afternoon even on weekends.  We had a burst of hope that we could zip into the park that morning and snag a site before the weekend crowds came.  We figured we would only be able to go to one or two things per day once at Yellowstone due to the distance in between sights.  We figured extra days in the park would make things a little more leisurely.

We packed all our soggy camp furniture up and headed toward the park!  The first campground we got to was Madison and they already had a sign out that said they were full.  There were SO many people ahead of us making it a steady stream of slow moving cars on the park roads.  The next campground was Norris.  We had high hopes for this one as they didn’t have a FULL sign up yet.  However, after pulling in they told us that they had room for one of our vehicles but not both.  Justin had looked at the max length of the sites which was around 30’ which would work IF it was also wide enough that we could park Azul next to Wobbles.  These sites were not.  We were discouraged but the ranger at Norris pointed us toward Mammoth Hot Springs confident that there would be space there.

On the way to Mammoth we ended up seeing some elk and a buffalo as well as A TON of thermal attractions along the way.  When we saw Mammoth Hot Springs terraces I shouted, “Mammoth to your left!!”  Our youngest was looking everywhere and said, “I don’t see a mammoth anywhere!”  Haha!!  I had to finish laughing before I could choke out that there wasn’t actually a mammoth by the side of the road but instead a giant hot spring.  I could tell this was significantly less impressive to her by the look on her face.  It was so hard not to stop at all the sights along the way, especially knowing that it would take hours to back track to get to them. But, we were on a mission to get a campsite.  So, onward we went.

Upon arrival to Mammoth Springs we were hopeful to get a site only to learn that the RV sites had filled up by 9am that morning (it was past noon by then).  We never even stood a chance.  The fact that we all slept in put us at an extra disadvantage.  The website that shows availability includes tent sites not solely RV sites which we didn’t account for.  Bummer!  We had driven more than 3 hours straight through the park without even stopping to see the amazing things that Yellowstone has to offer!  Lesson learned.  We were advised to show up before 7am if we wanted an RV site in the near future.  In hind sight we probably should have taken the available site at Norris and just parked Azul in an overflow parking section.  Things are always so much clearer in hind sight!

Oh well, out we went again, this time out of the north entrance to the park.