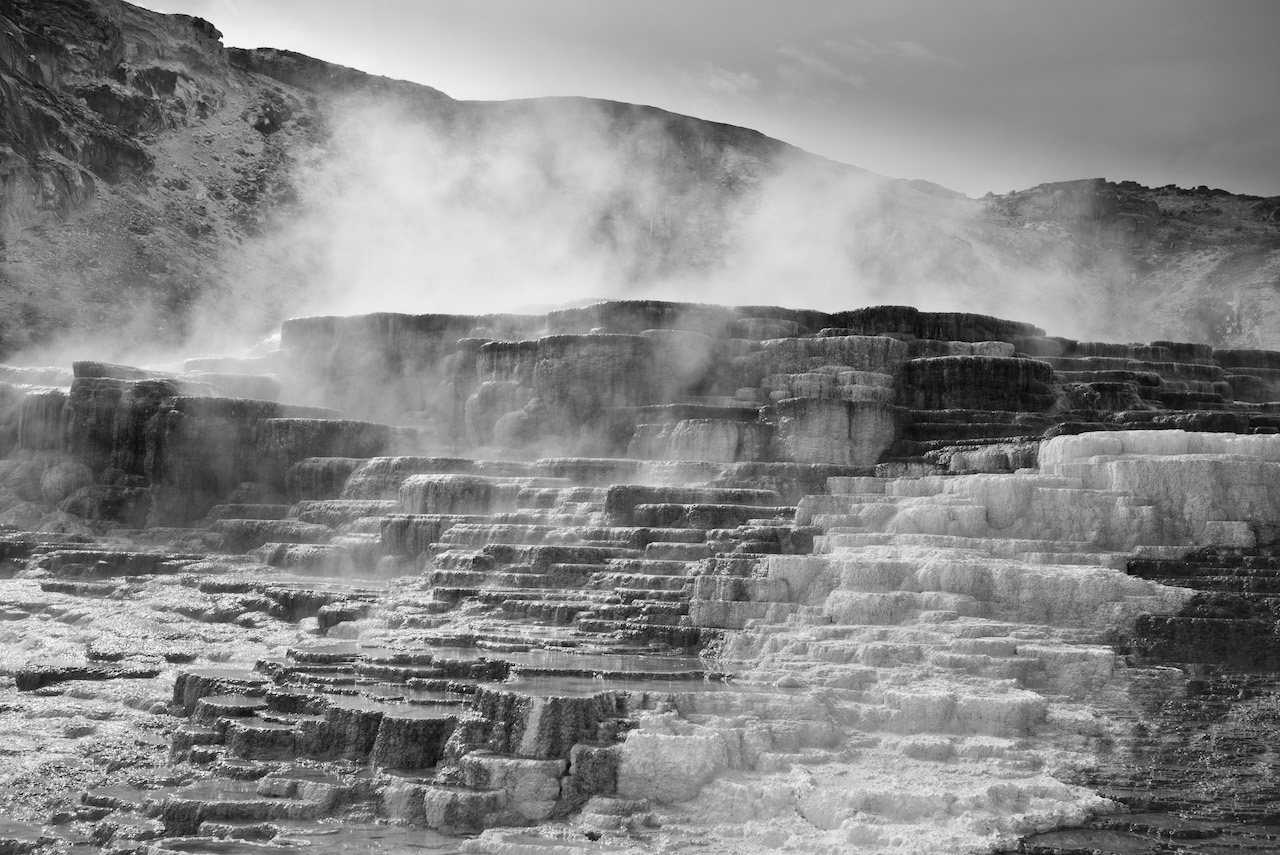 Our plan worked!!!  We woke the girls up before the sun came up, snuggled them into little blanket cocoons in Azul and headed into Yellowstone to try our luck snagging a Mammoth Hot Springs Campground site.  When we pulled into the campground there were already 3 or 4 rigs in front of us.  Not too bad.  Justin checked and the ranger at the desk said that at least a dozen people were checking out that day so we would definitely get a site.  Hurray!!  Bad news was it was 4 hours until check out so technically we could potentially be waiting for that long.  We were hopeful and excited to be promised a site!

While we were waiting to get a spot we had some nice warm oatmeal to fill our bellies.  Rangers kept coming up to the window reminding us to stay warm and asking that we remain patient and that there were sites freeing up sometime this morning.  They were so nice and so diligent about checking on us frequently it made me think that they must get some really grouchy folks waiting in line at times.

We got a lovely site that overlooked a wide open grassy field that elks freqented very often.  Within a half hour of arriving at our site an entire herd passed just yards from our camper!  They are such large magnificent creatures.  The buck’s antlers were really very impressive!  His bugling was such an interesting sound.  Something like a cross between a kid screaming and a wolf howling.

At one point when the herd had passed I went to the bathroom house and when I came out the door a Mama and her baby along with a dozen other cows were right outside.  I went back into the bathroom and watched through a crack in the door.  It was pretty neat and funny that I was trapped in the bathroom for 10 minutes until they had moved on.

We put our binoculars to good use at this campsite!  We were seeing so many elk that the girls temporarily turned into elk! 😉

The girls got to check out the visitor center museum and feel how heavy all the many horns and antlers were from animals that frequent the park.  Big horn sheep win over elk and moose.  Though moose came in a close second.  To think, moose shed their antlers for the winter when food is more scarce but big horn sheet carry that weight all their life, every day!  Pretty incredible!

On to Mammoth Hot Springs. What amazing and foreign looking terrain.  Some of it looked as if it were glass, ice, cheese, worms, coral or snow.  These features really tricked the eyes.  We resisted the urge to eat the “cheese” but it did make us hungry for a granola bar!

Imagine yourself as an explorer coming through the beautiful forests of Yellowstone and to stumble upon a hill of fumaroles, geysers and sulfuric hot springs cascading down a volcanic hillside!!  You might think you were dreaming or had been slipped some kind of a loopy drug.  The landscape is just out of this world!

I had remembered the fumaroles in particular as obviously not having a pleasant scent so I made little essential oil necklaces for us all the wear.  I was trying to cut down on complaining and make it a fun thing.  However, this semi-backfired.  Our youngest was going a little nutty with the smelling and accidentally dropped the cap of the oil on the boardwalk surrounded, of course, by fragile and dangerous thermal ground.  Ha!  By a stroke of luck we ended up finding the cap but that’s also when she lost her privilege to wear it.  The rest of the hike consisted of her asking for it back.

The Mammoth Hot Springs hike on the boardwalk was amazing but we also were getting punished by waking our youngest up early.  She was a puddle of whinning and tears.  Luckily we had brought the ergo baby carrier in Azul as a back up plan for the trip when the going got tough and boy was I glad we had it.  Our youngest willingly went into it (which was a shocker) and didn’t whine nearly as much once she was on me.  She had recovered to walk for the return trip and had some longer windows with no melt downs.

The boardwalk in and of itself is incredible! The paths around all these thermal features are quite long and are intricately placed to weave between and over all the attractions.  It must have been so challenging to build those structures on such uncertain and dangerous ground!  We were very thankful for the workers who made this park so easy to view.  The girls especially liked the knot holes in the boardwalk.  Such great peak holes for littles!

Our youngest found a dead moth on the ground and kept it in her hand saying, “I’m going to bring this back so we can look at it through a telescope…I mean a microscope!”  The moth was pretty mutilated by the time her hot little hands deposited it in Justin’s bag without him knowing it– but it made it back!

On our way almost to Azul while still on the boardwalk we were lucky enough to see a very large gopher snake slinking around just to the side of the walkway. It’s definitely the biggest snake I’ve seen in the wild before!  We ended up walking 2.7 miles on the boardwalk.

Just before checking out the books at the ranger station we admired the ginormous post office that Yellowstone has.  The building is massive with two mountain lion sculptures on either side that the girls enjoyed climbing on.

Then, into the gift shop we went to read all their books but 4.  That’s right folks!  These little ladies LOVE reading and since it had started raining it was a perfect activity.  The girls and I read for a little over an hour while Justin browsed the shops (it’s a pretty fancy village) and bought a Yellowstone sticker for Wobbles.

It was nice to hunker down for the evening inside Wobbles and watch a documentary about the Yellowstone wolves that our oldest and I have read so much about.  I would recommend the book “American Wolf” to anyone interested in the wolf saga of the reintroduction of the wolves in Yellowstone.

We ate soup and grilled cheese which was nice on a chilly rainy evening.  I, of course, sat at the little kid table while our oldest used our bedside table as an eating space.  Kiddos were too fragile by evening to be eating at the same table.  For some odd reason eating meals is always a bizarre ordeal of emotions running high.  It helps when the girls can be separated. 🙂

I got the chance to sleep in the bottom bunk with my youngest.  She decided at 3am she wasn’t tired anymore with a plethora of complaints pertaining to why this was true.  After an hour of trying other options I crammed myself into her bed with her.  Out she went like a light!  Just needed some extra Mama love.