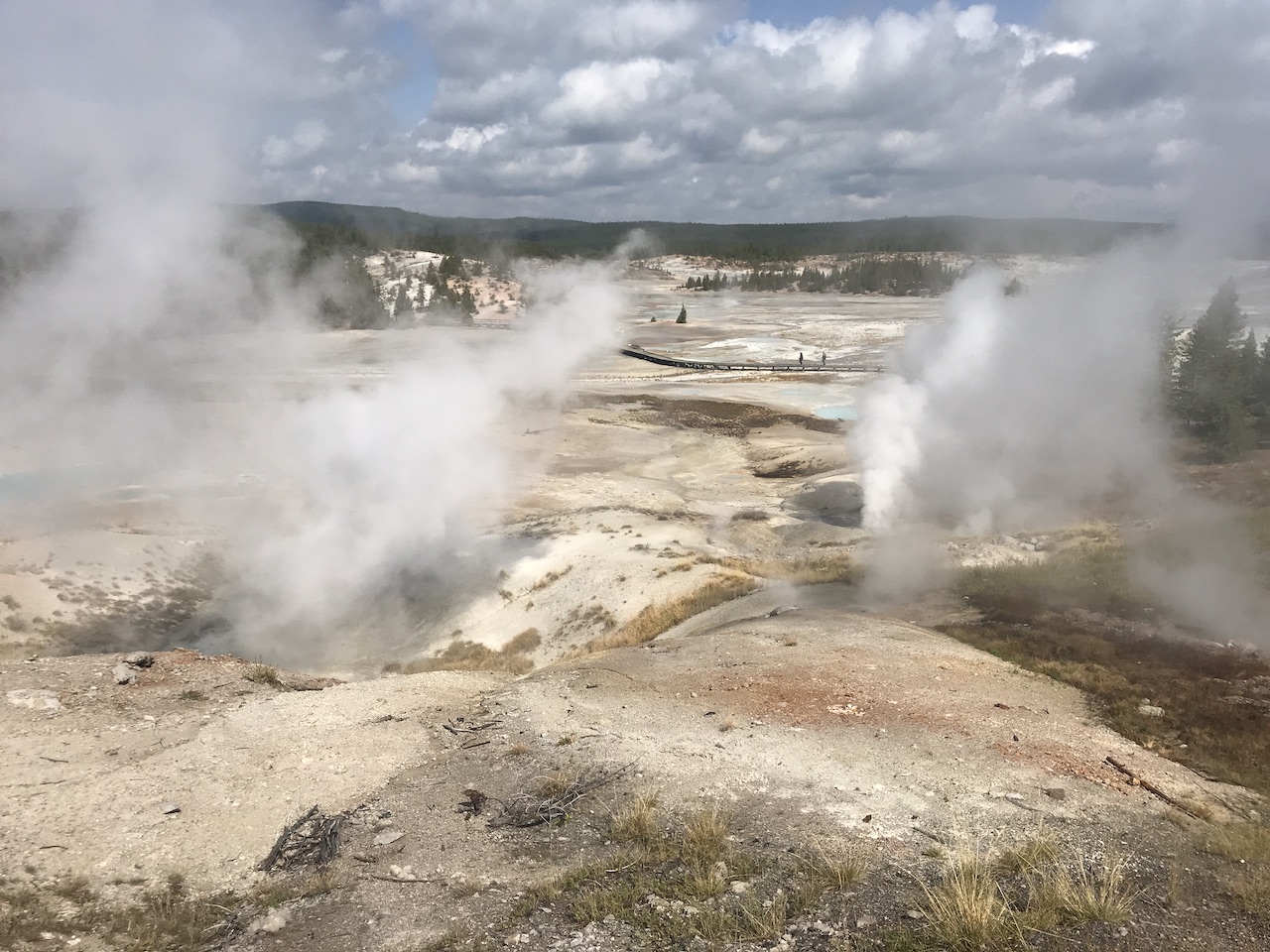 The girls spent all morning happily working on their Jr Ranger books and Justin used the Internet while we still had some.  In Yellowstone our internet only worked in the early morning and late evening when less people were online, so we had to make the best of it when we had it.  Then we were off to the Norris Geyser Basin!

Wow!  What a place, a popular one too!  We ended up parking on the side of the road after finding that the main parking lot was closed due to it being full.  It was actually a little nerve wracking parking where we did because it was on a steep slope.  Azul is so tall it felt as if we might tip right over!!  We were tipped so much that our refrigerator was having a hard time staying in. Haha!

This place was totally worth going to though!!  It was just littered with geysers, fumaroles and hot springs.  They were so impressive!!  The path we walked totaled 3 miles.  So much steam, so many bubbling pits, so much beauty and wonder.

Each geyser, fumarole and hot spring were so different and unique I never tired of seeing them all.  The magical hottest temperatures of blue and yellow were majestic to see in the barren thermal territory.  Some of these geysers were continuously active sending giant steady streams of steam and spirting water up from beneath. Imagine how much water must be under this land to make that possible!  One of the rangers said that the underwater reservoirs are replenished each winter when the melted snow gets reabsorbed into the earth.

In Norris Geyser Basin molten rock was a mere 4 miles below our feet!!  That’s crazy close!!  The last eruption of Yellowstone’s super volcano was 640,000 years ago.  Not that long ago really.

We were able to look upon an amazing geyser by the name of Steamboat Geyser while we were in this area.  In 1961 the geyser erupted after having not erupted for 50 years. Last Spring this geyser became very active. Since then, visitors have been able to witness 66 eruptions.  It is highly irregular but since March 2018 it has been erupting every 3-12 days.  When this thing does erupt it sends blasts of water more than 300 feet into the air. This is the highest shooting geyser in the world!!  The last 4 eruptions have happened 6.5 days part.  Guess what day we were there?  6.5 days since the last irruption!!  We watched the geyser for some time with the diehards (who camped there overnight waiting for it) hoping that we might be lucky.  The enthusiasts told us that the last few days the geyser had had more activity.  When we saw it, it was probably shooting 20 feet in the air which seemed pretty amazing.  Since there was no eating allowed and no bathrooms in the Geyer Basin the girls were running out of steam (unlike Steamboat Geyser) so we had to head back.

The weather had been super cooky since we arrived in Yellowstone.  When the sun came out it was a pleasant temperature where you could wear a sweater and jeans and be comfortable (feels like high 50’s).  But, boy, when the sun went behind a dark cloud or it started to rain it instantly got bitter cold where you needed a hat, mittens and coat to feel at all warm.  Throughout our hiking days the on and off rain mixed with dark cloud effecting the temperature made for LOTS of costume changes!  Our youngest probably changed outfits/layers at least 2 dozen times throughout our Norris Basin hike.  We were glad to have options!

When we got home to camp the girls went for a bike ride around the campground with Justin.  They had been itching to do this since we arrived as the campground road is paved in Mammoth.

After dinner our youngest wanted to go out again so on one loop I took her on foot, jogging along at her side to keep up.  All of a sudden we saw something in the bushes ahead of us by the side of the road.  To our surprise, it was a badger!!  Neither of us had seen one outside of a zoo before.  We of course stopped in our tracks!  My first reaction was of awe and amazement which quickly changed to a bit frightened when he stopped mid-walk, stared at us and held his sharp claws out where we could see them.  I had my arms on our little one ready to grab her and run if need be.  Luckily, he went on trotting and we breathed a sigh of relief and were staring in amazement again.  It looked like a raccoon pretending to be a plump low to the ground foot stool.  They are just so funny looking and quite powerful as well.

That evening during bed time reading we spotted two buck elk quarreling for power.  It was crazy to see!  Our oldest is the one who spotted the two bucks sprinting past our camper maybe half a football field away.  They snorted and bugled at each other both taking a proud stance showing off their antlers.  At one point the “intruder,” a darker and slightly smaller buck made a move toward the bigger and lighter buck’s cow herd.  At this the larger buck snorted and thrusted his antlers at the smaller buck.  After this they exchanged many more loud snorting patterns and powerful bugle calls which ended in the smaller buck retreating over the hills.  Once the larger buck was sure the intruder had gotten the message, he and his ladies crossed the road and went in the opposite direction.  What a sight!!