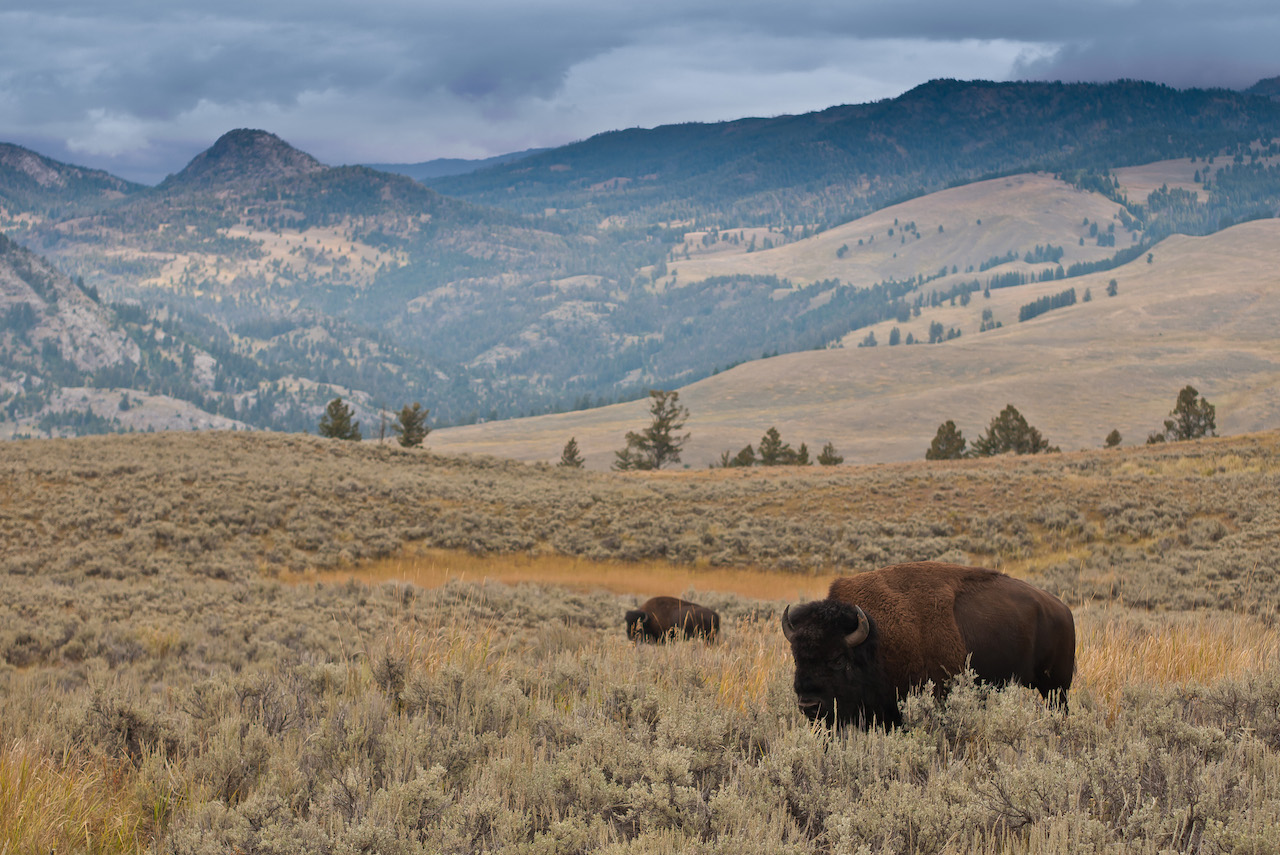 For our adventuring this day we decided to go to Tower Roosevelt and down into Canyon Valley.  We were originally thinking of checking out this area on our travel day from Mammoth campground to Grant but we rethought that and thought it was wiser to only bring Azul to fit in more places.

On our drive to Tower Falls we were excited to see a herd of bison sitting very close to the road.  We pulled over to take a peak.  It was so neat to see so many fairly close including Mama’s and their babies.

We then noticed that there were two bulls to the left of Azul as well.  One of them actually passed just a foot from the back of Azul to cross the road to his herd!  It was incredible!!

While we were gushing about how amazing it was to see our oldest yelled, “there’s one right in front of us!!!”  Sure enough, there was a bull nearly touching the grill of Azul!!  The bull very slowly walked from the front to Justin’s side of the car.  Close enough that we absolutely rolled up the window and were shaking in our boots a bit.  He then snorted and passed back in front of Azul and across the street to the herd.

Meanwhile the other male on our left started running full speed away from us.  Let me tell you, they can run fast!!!  It picked up his tail and dust stormed his way over the sage covered knoll.  The whole thing was incredible!!  The girls and I kept repeating, “I can’t believe that just happened!!!  That was amazing!!” What a treat!

We stayed for a bit more snacking on seaweed and the girls warming themselves by the heater.

By the side of the road a ways away from the buffalo we saw a coyote stalking something.  We even got to see it pounce though it didn’t get what it was after so it trotted on.  There is so much wildlife here!

Next stop, Tower Falls!  There is a viewpoint just a short walk from the parking area to see the stunning fall named after the tower-like rock standing above the falls.

There was a continuing trail that we assumed went to the bottom of the falls.  However, upon arriving at the trailhead there was a sign saying something like, “This trail does not lead to the lower falls nor does it provide any additional views of the falls.”  They were selling it for sure!  We almost turned around when Justin researched it and discovered that it was a trail that lead down to the river and the beach.  That was good enough for us!  We started down, down, down the trail when we all realized that we didn’t have any food or drinks packed as we hadn’t realized there was more than just a viewpoint.  Sweet Justin ran back and got some provisions while the girls and I continued down the trail.

The girls and I got to the lookout landing which was the end of the marked trail and still hadn’t seen Justin so we stalled a bit and tossed pine needles we found the ground over the railing to see how far they could go.  We also spotted a red squirrel.  The girls cheered it on as it climbed a pine and waved at it once it reached the top shouting, “Good job little buddy!! You did it!”

It was pretty cute.  After walking partly back up the trail again we ended up seeing Justin so we walked back down again to share the view with him.  What I had missed (but Justin caught) was the sign at the view landing didn’t say “Do Not Continue” it said something like “Beyond this point trail is not maintained.  Travel at your own risk.”  It was slick but definitely doable so we decided to have a picnic lunch on the beach.

It was a gorgeous spot nestled just at the end of the Grand Canyon of Yellowstone with the towering yellow, white and amber rock ledges surrounding the roaring Yellowstone River.  With the river’s swells it had pushed large logs along the beach, situating them as if it was a seating area to view the beauty of what was in front of us.  We had the place to ourselves for the first part of our time at the beach which made it feel extra special.  We couldn’t have asked for a better lunch spot!

Just as we were finishing our lunch it started to sprinkle.  Justin put our lunch away while I got the girls into their rain coats.  So far during our time at Yellowstone it had rained a lot but only poured once.  More often than not it just sprinkled for a bit then the sun came out again.  We just assumed this would be the case so we weren’t in a huge rush to get back on the trail.  In fact, we hadn’t taken our family picture yet so Justin started setting up the tripod to capture the beauty of this place.  Well, by the time we were taking the picture it was down pouring!!

We were all soaked and still had a steep climb ahead of us.  We made the best out of it but it was tricky for sure as little streams had formed down the path.  However, by the time we had almost reached the top, the rain had let up and the sun was trying to peak through again.  We all made it on our own two feet 1.3 miles through rain and shine.

Since we were all drenched we hung up our layers in Azul and turned on the heat to dry out and warm up.  I took some time to prep dinner while we dried.  By the time we reached our next destination our things were mostly dried out and we got a second wind now that we had all warmed up.  Being wet and cold is always hard for me.  When the kids whine about it I think to myself, “I would be whining just like you if I could.”

We were running out of time before we had to head back to camp but we decided to do the North Rim Drive within Canyon Valley since RV’s weren’t recommended on that road.  We figured it was our only chance.  Parking was nutty as always but we ended up finding a spot on the side of the road near a trail that led to Lower Falls.

It was a massive wide waterfall roaring over a dip in the landscape.  The view point up top was enough to amaze you but keep you wanting more.  There was a trail that led down to a promised perfect view of the falls.  We decided to go for it!  The trailhead said it was a steep narrow trail with a great view and this was correct!  The narrow partially paved trail (we were glad for this as it provided some traction on the steep path) carried us through switch back after switch back down to a series of wide wooden staircases finally ending at the view.  The view was as promised, perfect!

I wasn’t sure how the girls would do as I saw many adults exit the trail huffing and puffing.  They did great!!  They happily made it down and our oldest made it out without complaining a bit!  Our youngest made it out the 1.7 miles with very minimal complaining and, to be fair, she had to go to the bathroom really bad and it was a long way until we could get to one.  I was so proud of them!!

Meanwhile, back at the van our potatoes au gratin (pho cheese that is) was bubbling and ready for us after cooking in the electric mode of the solar oven (which is powered by the solar panels on our roof).  We are finding that liquidy food cooks just fine in the electric mode.  Solids, not so much.  It’s so nice to have this solar oven though.  It is so handy to cook on the road and not have to worry about it overcooking.  It’s nice to not have to rush back to camp to make dinner and have a hot meal waiting for us on a chilly day. We all ate well and the girls were pooped!

Coming back into Mammoth Village there was a pretty funny elk traffic jam.  A giant herd of elk including a buck, cows and many pretty small babies were very slowly crossing through the village.  They know that we are visitors and this is their home.  They took their sweet time.  If you have to be stuck in traffic, animal traffic is the best kind.

In the evenings and into the night at Mammoth Campground we could hear the bugling of the males close by.  It’s such a wild and wonderful sound to hear.  To illustrate how loud and powerful their bugles are: we have a noise maker on in Wobbles at night so we all sleep a bit better and we can STILL hear the bugling loud and clear over the noise maker.