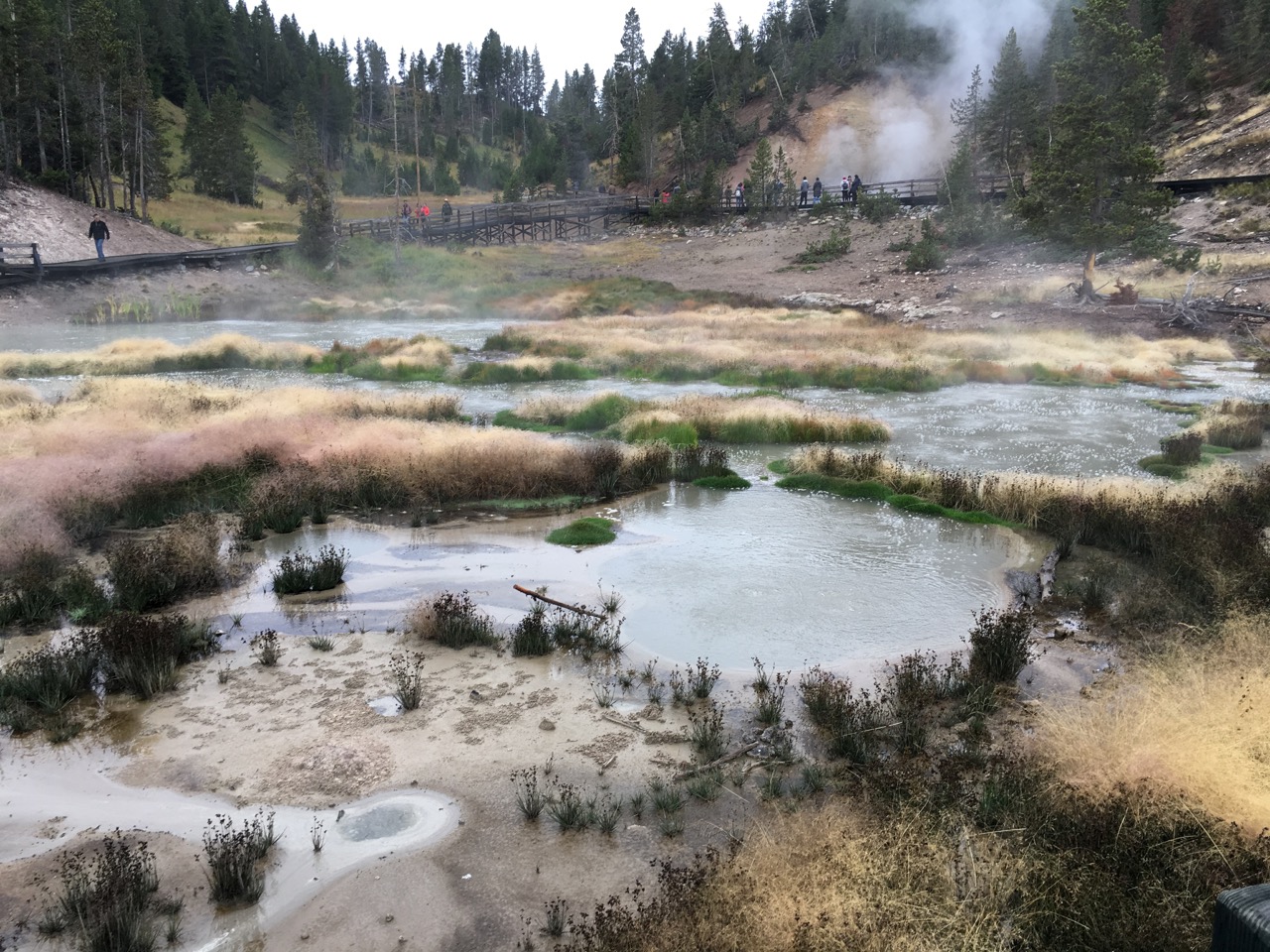 The girls both finally slept through the night!  The two previous nights our 4 year old was up for 3 hours in night for reasons unknown to us which, after hours of trying other options, again resulted in me cramming myself into her bed to sleep for the remainder of the night.  So, after her first good nights sleep in a while we chose to wake her up before dawn to attempt a peak at some wolves in Lamer Valley.  Not the best parenting choice but we were hopeful she would recover from lack of sleep.

I scooped up both of my sleepy bundles, had them go potty and popped them into a warm Azul and into warm blanket cocoons, hoping that they might doze off during the hour drive to Lamar Valley.  Our youngests’ wee hour meltdown put a damper on that but at least it was only one and not two kids having a hard time.  There should be a rule that no meltdowns can happen before the sun is up!!  Nobody has the energy for that yet!

Anyway, we were all excited to possibly glimpse a wolf in its natural habitat.  Our oldest and I have been reading “American Wolf” and were giddy to have the chance to see some of the descendants of the wolves we have been reading about with their unique personalities and flair.  The ranger who we asked gave us a vague answer when we asked where the best spots for wolf spotting were.  However, we found a very sweet and knowledgable girl who worked in the gift shop who was an avid wolf tracker and told us our two best options for good viewing.  Hurray!!  How exciting!!

On the road we drove and drove and drove some more!  After a while I felt like we should have been there by then.  I wasn’t sure if this was from anticipation or something else.  I asked Justin if he knew where he was going.  He told me he didn’t have Google directions anymore but it was only one road and it was straight the whole way.  Okay, sounded easy enough.  Soon after we passed a sign that said something about Dunraven pass.  Huh, that was strange because there was a Dunraven trail south of where we wanted to be by quite a bit.  We then saw a sign for Canyon Village.  What?!  Canyon Village was an hour south of where we wanted to be!  Justin assured me it was just the sign for the junction in which we would take if we wanted to go south, which we didn’t.  And, this is about when things fell apart.

We had somehow missed our “turn” or straight away to Lamar Valley to the Far East of the park and took a right heading south toward Canyon Village.  It would take an hour to drive back to Lamar Valley by which time the wolves would be out of sight.  We were told over and over that the best time by far to see the wolves is at dawn.  I broke the news to the girls which followed by a good cry from my oldest and some Mama snuggles.  Crumbs!!  We had really messed that one up.  As a family we decided the best plan of action was to put aside our wolf dreams for the day and explore the things we were now close to and attempt a Lamar Valley trip the following morning before dawn and then get back to the campground in time for check-out.  I also suggested because of the huge blow to the day we go to Canyon Village, which we were now at, and eat breakfast out.  That lightened all our spirits a bit.

Upon arrival to the Village parking lot we realized some details we had overlooked in packing for the day.  We had gotten back late the night before from our adventuring so we hadn’t properly prepped for our morning outing.  I packed the girls clothes and breakfast but that was about the extent of prepping.  This meant that we had not brought the girls shoes!!!  I realized this is my head before announcing it to the family so I had most of my panicking to myself.  However, after a short time of panic as a family we found that we had some extra rain boots in Azul for our youngest and we found some sneakers stashed away in there for our oldest.  Thank goodness!!  That would have been a real whammy!

In the village there was a deli within a grocery store and then there was an Eatery in a separate building next door.  The Eatery looked like the better bet so we went there.

As we soon learned, we either made the wrong choice or we were chasing between two bad options.  This was IKEA style (style mind you, but not comparative in food quality which is saying a lot) with 3 options to choose from; scrambled eggs and home fries, scrambled eggs with bacon bits in it and home fries or 2 pieces of French toast.  It was laughably awful!  Justin and I kept our comments to ourselves because the girls seemed to be happy with it but it was basically some freezer thawed fried potatoes which were basically just the fried shell as many of mine were hollow inside, some burnt scrambled eggs and white bread dipped in eggs.

Our little one said, “I think I’ve had these things before (the “home fries”) but they were long and skinny.”  What she was referring to is French fries.  Needless to say, we were all very hungry after breakfast.  But you know, it did the trick!  We were all in better spirits after our breakfast out.

We passed through Hayden Valley to start our adventuring for the day and we got to see some really amazing things!  We pulled over to watch a bald eagle stalking its prey.  We guessed it was either a duck or a large fish because it chose to swim across the river using it’s wings as paddles as it held its prey in its talon.  It is something I have never seen any bird do, let alone a bald eagle.  While we were watching the eagle we also were lucky enough to watch as a herd of bison cross a deep river.  Brr!  It looked so cold and I was sure they would shake off like a dog on the opposite bank yet they didn’t.  It was as if they were walking through bath water!  Thick coats!!

Besides seeing these magnificent animals the whole Hayden Valley so so picturesque.  The bright golden yellow grasses were nestled among twisting and turning little tributaries and sage covered hillsides.  Justin and I were both wishing we had a telephoto lens for Justin’s camera to capture all the wildlife.

Onto the Mud Volcano area.  It was amazing!!!  There were so many really unique thermal attractions there including my favorite, Dragon Mouth’s Spring.  This spring is tucked away in the mouth of a cave which sounds and looks as if a Dragon is inside!  There was a constant stream of bellowing steam rising from the cave mouth accompanied by low pulsating growling sounds which correlated with waves and ripples sent away from the mouth.  A sign told us that up until 1994 this spring used to spray as far as the boardwalk!

The overflow from this magical spring ran into a deep bright evergreen stream which continued downhill into a large open pond-like bubbling pool.  It was crazy cool!

Pictures don’t do any of these things justice but the Mud Volcano was really neat to see.  In 1870 it was an actual volcano of mud spirting mud into the treetops with each eruption.  A couple years later it collapsed on itself and is now a caldera filled with much smaller splash activity.

Churning Cauldron was another of my favorites.  It was basically a giant pit with extreme thermal activity which gave viewers giant bubbling splashes reaching around 8’ out of the base.

In 1971 this spot was a warm calm pool of water with temperatures at 100*F.  However, in 1978 and 1979 there were a series of earthquakes that woke the cauldron, churning the pool again with boiling bubbles with temperatures at 150*F.  Then again in 1995 a whopping 500 earthquakes hit the area causing the pool of water to violently churn up. Today temperatures are now at 170*F.  At the elevation of this area 200*F is the boiling point, so it is the gasses being released that is creating all the splashes.  Such a neat area!

Since it was a really rainy day again and we were all low on energy we spent the rest of the day checking out the Canyon Village museum and gift shop.  When I say gift shop what I mean is the books within the shop.  I read all, yes ALL, the children’s books in the shop to the girls.  This took over an hour for sure.  Justin had some relaxing time researching camera lenses in Azul (as I am now just finding out :P).

After waiting a half hour in construction traffic (they are repaving a very large stretch of road north of the Norris Geyser Basin area, quite an undertaking) we made it back to camp to properly prepare for another early early morning to hopefully see some wolves. Hopefully no wrong turns this next time!!!

I made a simple dinner so the girls and I could shower.  It has been quite some time since we all had a bath and that takes a toll on our moods.  We are traveling to our final campground in Yellowstone tomorrow (Grant) and they have a dump station so we figured now was a good time for using up tank space.  It was lovely!  Justin even got a shower after dinner.  We are all sparkling clean!