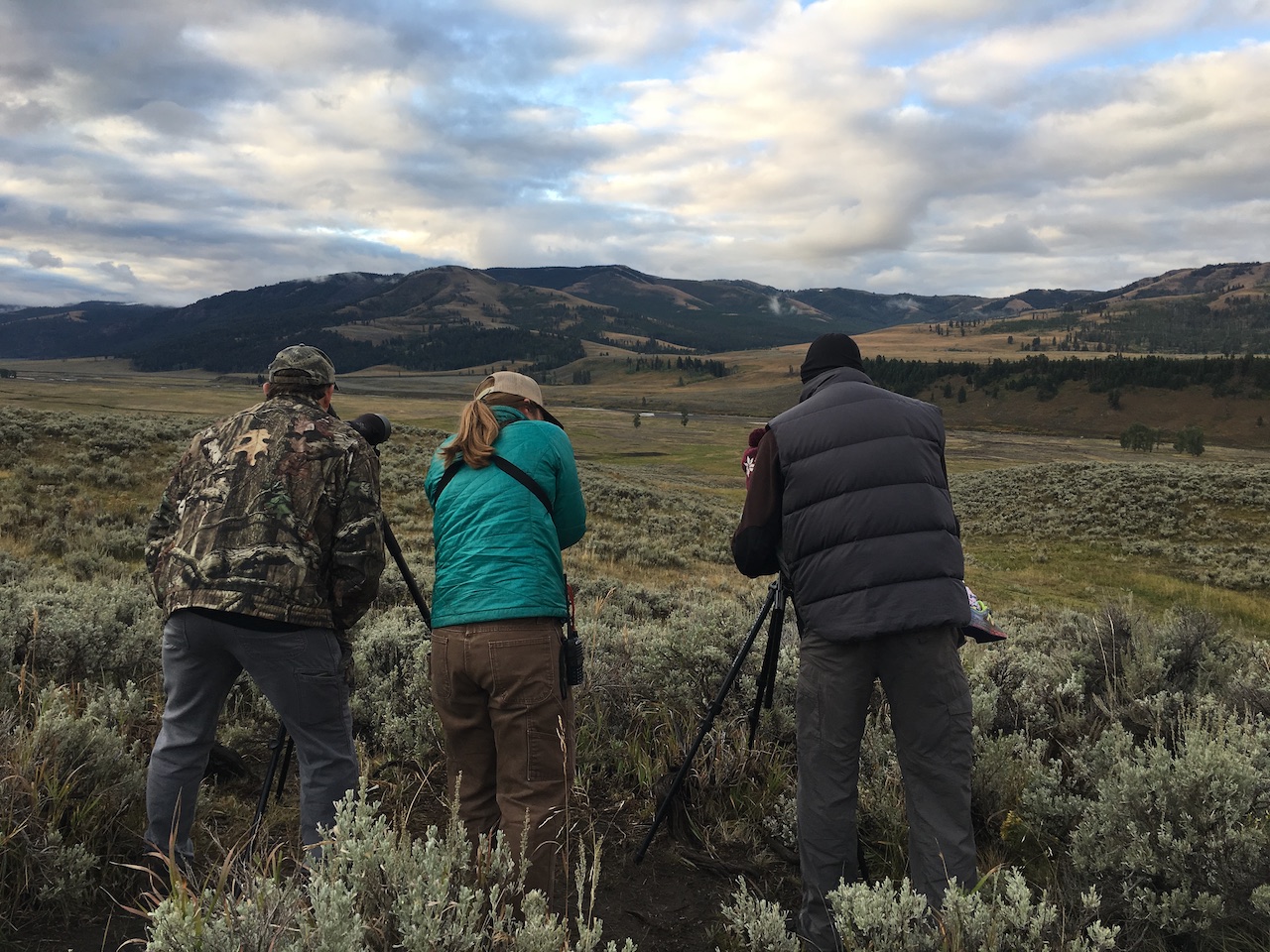 We made it to Lamar Valley!!  Justin and I prepped and packed the night before and we arrived in the mob filled Lamer Valley (along with a hundred others) just as the sun was rising.  Just on time with no wrong turns!  Second time’s a charm. 😉

It was a very chilly morning for wolf watchers!  When we arrived no wolves had yet been spotted that morning.  Wolf watchers will tell you you do a lot more waiting then watching but it’s what you watch that makes waiting worth while.  They are right!  We waited and waited, the girls getting restless.  I finally popped them back in the van, turned on the heat and gave them some breakfast.  Soon after wolves were spotted!  We had a pair of binoculars but the regular wolf watcher next to us had a scope and she very generously let us look through it to witness an amazing sight.

First of all, it is really tricky to spot wolves in the wild.  They are VERY good at hiding and have great camouflage!  With the acceptation of the black wolves, they were tricky to spot.  However, I counted 9 that I saw.  The wolf watchers told us that right now the pack has 11 adults and a whopping 9 pups!  We saw them approaching a grizzly bear as a pack.  We were unsure what was going to happen next with two such powerful carnivores so close to one another.  The grey wolf was definitely the leader as it led the pack to run and surround the bear.  When the grizzly started running the wolf pack followed and snapped at it’s neck multiple times.  The grizzly had clearly had enough and started chasing the gray wolf pack leader full tilt!  Both were racing across the meadow and let me tell you, they can run fast!  Then as suddenly as it had begun, the chase stopped.  The grizzly got up on it’s hind feet and the wolf pack trotted off each going opposite ways.  Wolf watchers guessed that the adult wolves were giving their pups a lesson in hunting as wolf packs don’t typically hunt full grown grizzlys.

Mind you all of this was happening at a safe distance and we were watching it through a scope or binoculars.  However, having a full grown grizzly for size reference, those wolves were really big!  It was such an amazing thing to see and all of us were able to see pieces of it.  Once in a lifetime experience.  Our oldest asked if we could go back the next day.  🙂 If the girls were older and had more control over their sleep I would have said yes in a heartbeat!

Lamar Valley was a hard show to follow but from there we picked up Wobbles from the Mammoth Hot Springs Campground and headed to Grant Campground with some ad-hoc stops along the way.  We had heard that the night before at 11pm Steamboat Geyser had finally gone off!  We had missed witnessing the tallest geyser in the world but lucky for us it is still really active for 24 hours after the eruption.  So, on our way south we stopped to see what it looked like about 12 hours after.  It was still pretty impressive indeed!

We were told by a ranger during a geyser talk that after Steamboat Geyser blows the nearby hot spring that is connected empties.  He was right and the girls had a good time fact checking him.

The second hike of the day was at Storm Point.  We had heard that this was a favorite of families with children so we thought we’d give it a try since we were passing it with only a small detour.  Or so we thought.  We hadn’t realized there was road construction on the way to Storm Point and ended up waiting 45 minutes to even get to the trailhead when it normally would’ve taken us 10 minutes.  But, since we were towing, there was absolutely no turning back once we realized we were stuck.

We made the best out of it and carried on.  Once at the trail head there was a sign that warned that this trail was in a “bear frequenting area.”  Oh boy!  I almost made us turn back as we had two tasty snacks in tow but after practicing and having the kids recite what to do if we saw or were approached or attacked by a bear, we decided to give it a try with our eyes peeled.  This hike felt like we were in a totally different location.  It was a very different environment situated along the massive Yellowstone Lake.

The girls had a great time “fishing” in puddles along the trail and even got to see lots of trees rubbed clear of their bark from bison that had sharpened their horns on them.  We were relieved that we didn’t see any bear scat or scratch marks on trees.

The trail began across a grassy prairie overlooking Yellowstone Lake and soon turned into the woods and down to a beach.  It was a lovely change of scenery and so much fun for the girls to play on.  The girls decorated a castle someone had left on the beach with seaweed and rocks.

Soon after Justin discovered that just 6” under the black sand there was clay!  We made and tossed around clay balls for a while until my oldest had the great idea to make buffalo chips out of them.

The girls dug a hole finding two layers of different colored clay to make the base of the buffalo chips.  Then they collected bits of dead grass to mash into the tops, giving an authentic touch.  They looked pretty real!

We had so much fun on the beach we ran out of time and had to turn back to get to our campsite for reading time before bed.  Sadly, when we were down by the water we saw a lot of oil in the shallow side puddles of the lake.  They do allow boating so this must have come from one of them maybe?  I would have thought motor boots wouldn’t be allowed.

None of us saw a bear, thank goodness, but we did realize AFTER the fact that we had walked right next to a bull bison!  I saw a photographer taking pictures our way but I thought he was capturing the beauty of the birds on the lake amongst the lush green grasses.  Nope, he was taking pictures of the bison that was standing to the right of the trail.  Thanks for the warning buddy!  I’m glad nobody was hurt but it did give my heart a jolt when we discovered what had happened.

On our way back through construction we saw a bison trying to decide if he wanted to cross the wet pavement toward the workers or not.  He was certainly not happy about the construction, probably wanting to cross over to enjoy the beach of Yellowstone Lake like the other bull bison was doing.  The bison on the side of the road tossed dirt around with his horns then did a flail-kick in the air.  Not sure what that means in bison language but it was powerful to see.  They are so large and powerful!

During our ride to Grant Campground our youngest had a meltdown that was one that we hadn’t seen since her 3 year old days.  She basically shut down and was screaming not and able to reason with anyone in the slightest.  It’s amazing how long complaint lists get when someone is so little.  Lack of sleep was definitely hitting hard.

We were all exhausted from lack of sleep and were ready to eat dinner and sleep after getting set up at our new campsite.