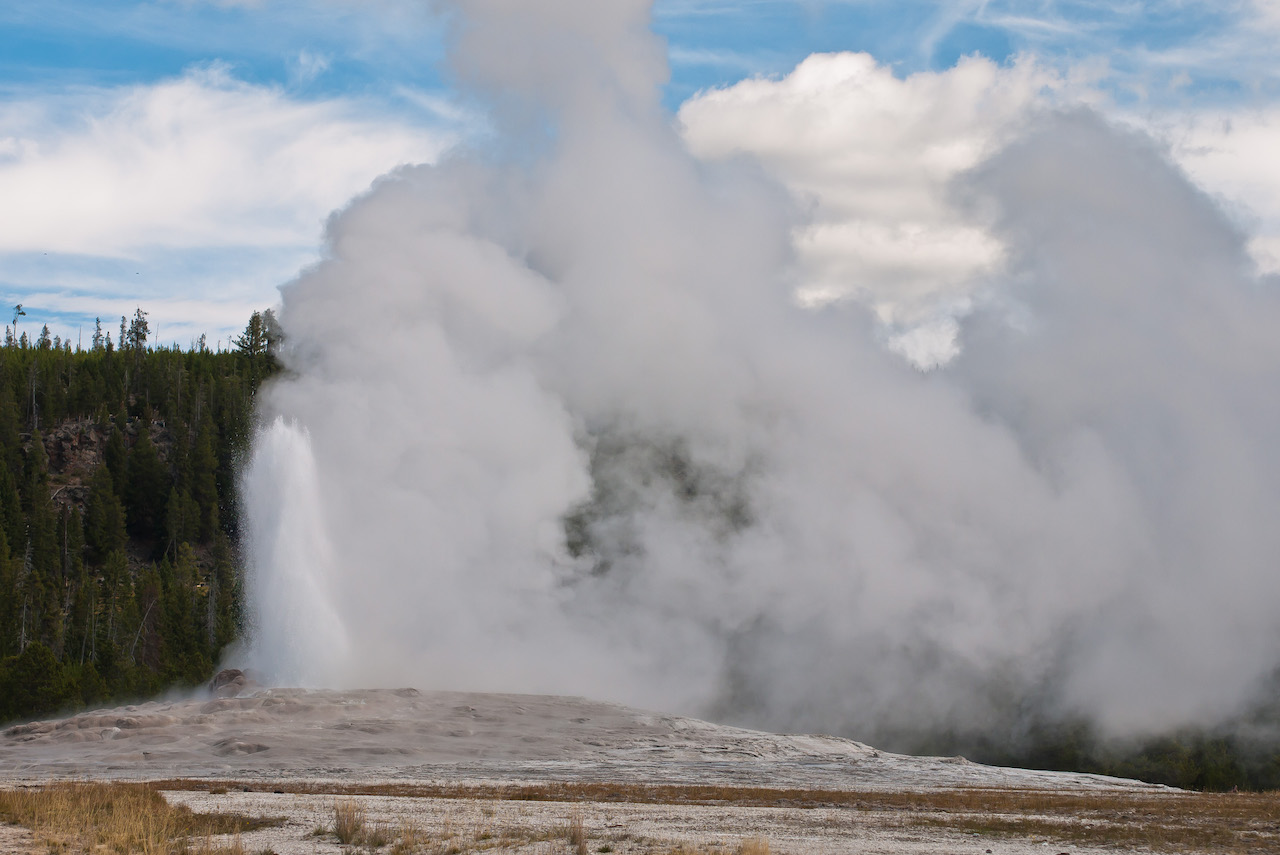 We were excited for our first day in the Old Faithful area. Up until this point the geysers we had seen were either just small bubblers or were venting only steam at the time .. On this day, however, we saw 4 eruptions (ok, 3 of them were the same geyser, but still awesome!)

We had trained our girls to wake up before dawn the past 2 days and so they followed suite this morning as well.  Hopefully this will change within a couple days.

Since we were up, I made pancakes on the grill.  It was definitely a chilly morning at 30*.  I kept warm by doing lunges whenever I wasn’t scooping up batter or flipping cooked pancakes off the grill and of course bundling myself up like I was in the arctic.  It was worth it to have warm pancakes with maple syrup to start the day.

The southern part of the park is definitely more forested than the many grasslands we had explored up north in the park.  Our new campsite was nestled into the woods which was a really fun spot for the girls to run and play.

We were all glad that our Old Faithful destination was only 30 minutes away instead of the hour plus rides we were used to within the park.  Just as we were arriving Old Faithful was in her glory which meant we had about an hour and a half to do other things before going to view it.  We checked out their museum at the visitor center.  They had a really nice interactive section just for kids where they could see how big the tracks were from frequenting animals of the park compared to their own hands.

It also taught them at what temperature different microorganism’s lived in the water near the thermal features.  We were surprised to find that insects can live in temperatures up to 122*F.  That’s pretty hot!

Next, we settled ourselves down to watch Old Faithful erupt.  And, just on time, she did!  It was so neat to see!  Although, I think it has been hyped up so much that people expect to see a full out explosion in front of their eyes or something.  When it went off nobody around us cheered or gasped or even said as much as, “wow!”  Instead I heard one person say, “Is that it?!” and another, “one picture is enough, it’s not really that high.”  People!  There is magma a close 3-8 miles below our feet that is heating a gigantic underground pool of water that is then getting pressurized from a 3’ tunnel through a 4” pinch to create enough power to rocket hundred of gallons of water above the trees (at regular intervals mind you).  That’s something to be in awe of for goodness sakes!  I bet before TV’s special effects people thought this was a pretty amazing sight.

The girls were able to turn in their Jr Ranger Books after working so hard on them and completing the level for 13 year olds. Both girls came up with their own thoughts and answers and sounded out each of the words they were writing. I was so proud of them! It took them quite some time. They each said their pledge, earning a movie night and their patches.

Off to the geyser loop trails we went.  Because we spent some time at the visitor’s center we were at a boardwalk overlooking Old Faithful just in time to see it erupt again! This was an even better view than the first.

The color on so many of these thermal features was out of this world, crazy, amazingly beautiful!!  Nobody can describe or show you a picture to do these thermal features justice.  It looked like it was painted on color or something.  It was such a bizzar sight to see that your brain starts questioning if it is real.  Florescent orange looking streams were flowing like lava down the sides of the hillside into the river below.  Geyser after hot spring was overflowing into the river with a puff of steam.  It was magical.  I never tired of seeing geyser after geyser, hot spring after hot spring.  They were each so unique and so incredible!

We were lucky enough to see Grand Geyser erupt.  We arrived at the geyser about 45 minutes before it was due to go off so we decided to stick around since it was a less frequent one.  The guy sitting next to us was a park employee and he gave us some tips about the geyser.  He, very accurately, told us that after the geyser went off if the pool it was sitting in didn’t drain, don’t walk away!!  In this case it would erupt for a second time for a shorter length of time yet a higher more powerful burst.  He was spot on!  Most people started to leave after the first eruption, but the pool didn’t drain.  Sure enough, the second eruption was even more spectacular than the first!  This is the tallest predictable geyser in the park.  Of course while it was erupting our 4 year old took no notice and had some kind of complaint about her Yellowstone workbook.  Littles will be littles.  It was a neat sight especially with the crowd cheering-on the geyser!

On the last bit of our hike we got to see Old Faithful go off yet again, this time from a distance.

Toward the end of our hike, our littlest needed to use the bathroom so we zipped (and when I say zipped I mean we walked at a snails pace with the intention of going fast; little legs are little) to the Old Faithful Inn.  What an amazing building that is!  It was built in 1967 out of what I’m guessing is mostly lodge pole pine trees.  The steps are authentically uneven halved logs and there are large rocks forming a massive center fireplace.  Our girls yelped, “Can we go up to the top of the tree house?!”  That’s exactly what it looked like too, a big fancy tree house!

Unfortunately we didn’t make it to the top as we found that the “Crow’s Nest”, as they call it, is off limits after an earthquake twisted some logs making it no longer safe.

When we exited the inn there was a bull bison there to greet us lying down on the side lawn. There was a ranger there of course asking that people keep a perimeter around him so nobody was hurt. Neat to see so close!

We made it back to whip together some homemade pizza’s on the grill and have some time after dinner to play.  What started off as the girl’s idea to play turned into a family evening of fun.  The girls were pretending they were prairie dogs and I was the wolf trying to eat them.  They made a cozy “den” in the woods near our site that was their safety zone.  They would take turns going to forage more supplies for their larder at which time it was my job to chase them back into their den.  At some point Justin joined as a fellow prairie dog and the chase was on!  This wolf had some tasty meals.  The girls saw that it was pretty fun to chase Daddy so they joined my team and became my wolf pups and Justin was our prairie dog catch.  We all had so much fun chasing and running from each other.  Lots of good huge there. :).

When we leave Yellowstone we will miss seeing the many different animals in their picturesque home.  For instance looking up from my knitting in the car to see a bull bison drinking from a hot spring as the steam rises over the grassy green fields in the background.  Yellowstone is a pretty special place.  I broke the news to my oldest that the next day was our last day in Yellowstone.  She cried saying, “I want to stay for at least another week.  This is such a magical place.”  When I told her we were going to Grand Tetons next she asked if they had geysers.  When I said no, she had some more sobs.  Yellowstone is a hard act to follow.