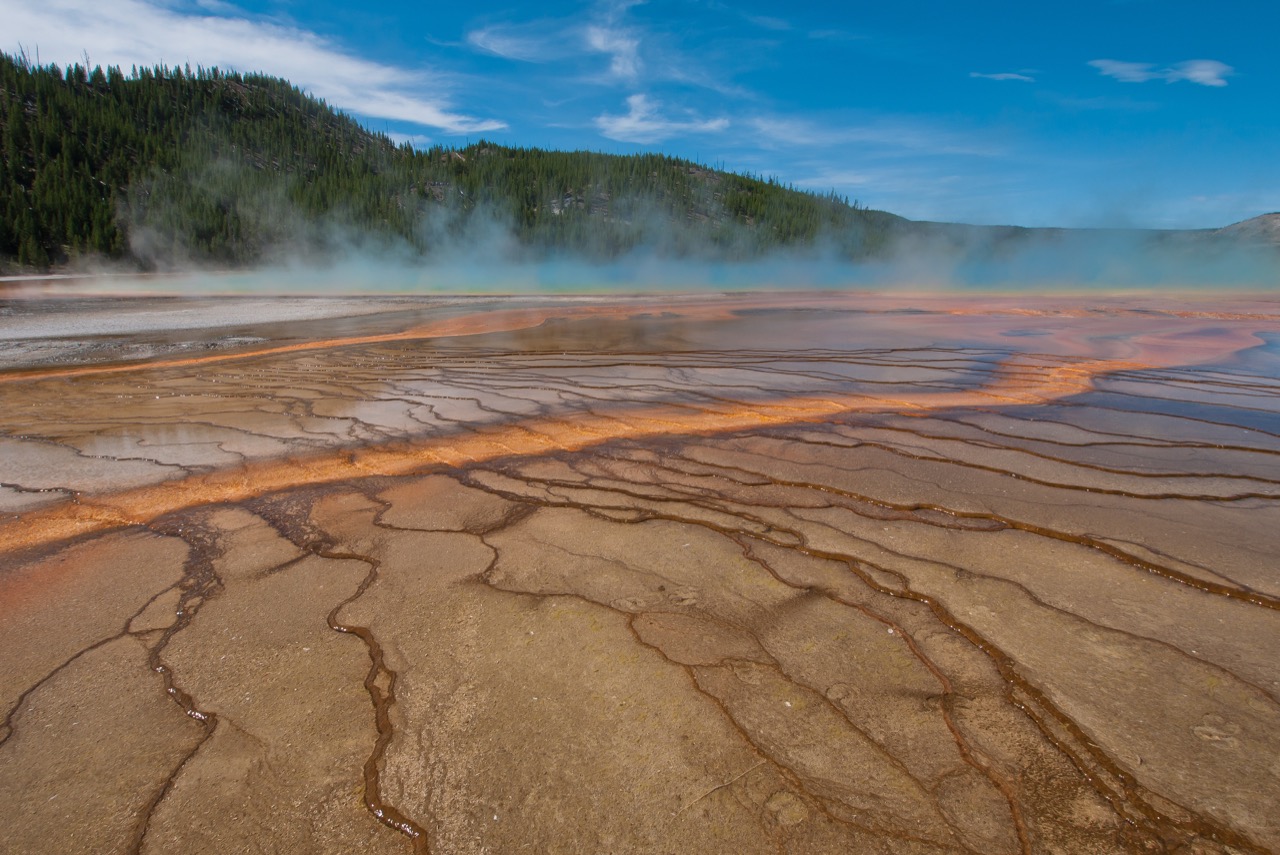 We chose to take it semi-easy on our last full day in Yellowstone as we were feeling like every morning we rushed out the door and every evening we were racing back to make dinner.  We were looking forward to putting some time into our dinner without feeling rushed.

In the morning I took Azul and went to do some laundry and take a shower at the camp shower house conveniently located next to the laundry house.  It was a really nice break to just be by myself and not feel rushed.

The showers were an interesting set up.  If you stay at the nearby Grant Campground (which we were) you were given a certain number of showers for free and for outsiders is was something like $4.50.  You check in at the laundry house where there is a host and they buzz you into the showers.  The showers were set up stall style with a common trough.  The great part for whoever maintains the bathroom is there were no curtains for the shower, simply a stall door, a little bench and hook for your things and then the shower.  Shower curtains are one of the things that gets disgusting the quickest so less maintenance for sure.  However, it was very drafty since every time the main door to outside was opened it gave you a flash of cold air.  A shower is a shower and I was happy for that for sure.  Folding warm laundry on a chilly day also seemed like a treat!

Apparently when I was gone the girls “trimmed puff balls”, which means using scissors to turn tinsel puff balls into confetti, which got everywhere. Afterwards they vacuumed up their messes.

When we headed out for the day we first stopped at Grand Prismatic, a place that I had been dying to go since we first got to the park.  The classic Grand Prismatic picture is printed on everything from post cards to t-shirts but I wasn’t sure how much they had doctored up the photos.  I wanted to see those colors for myself.

We started on the lower loop trail which also passed by many other brilliant colored and uniquely shaped hot springs.  The first giant hot spring that we got to (the Excelsior Geyser Crater) looked like a giant steaming meadow until the wind blew a certain way to reveal a pool of the most pure blues and turquoise I think I have every seen!

The waters looked like we were in the tropics and any minutes we would catch a glimpse of a great coral reef with all the beautifully colored fish that live there.  It was so out of place in the surrounding forested landscape.

The boardwalk then led to the edge of Grand Prismatic itself.  What a sight!  You could tell it was going to be amazing before you even got to it by counting the number of hats awe-struck visitors had lost while viewing it.  We counted 8 in total!  I was just imagining a gust of wind sweeping by and snatching the hats off of unsuspecting visitors as they continued to take pictures of the amazing sight.

The steam rising from it reflected back the brilliant yellow, blue and orange of the hot spring. It felt so unreal!

We were able to get down close and take a peak at the fluorescent orange microorganism’s that were lighting up the hot waters of the spring.  Close up they looked like corral or a sponge.  Scientists describe these as miniature forests.  The microorganism’s live in thick mats and work together; the top community gathering light to perform photosynthesis and the bottom community uses energy gathered by the top to perform decomposition and recycling of nutrients to the mat’s “canopy.”  Pretty neat, right?!

Unfortunately we didn’t have time and the kiddos wouldn’t have had the steam to do the longer and more strenuous hike to get a birds eye view of Grand Prismatic.  We knew it was either that hike or the bike ride we had planned for later that afternoon.  Since we hadn’t had a good family bike ride in a while and the girls were itching to ride their bikes we sadly skipped the birds eye view.  I was really bummed about that but I guess that gives us something to look forward to next time.

For our last adventure of the day we took a bike trail to Lone Star Geyser.  It is one of very few biking trails in Yellowstone so we wanted to take advantage.  It was a beautiful day with the sun shining (thank goodness– we had seen so much rain during our stay) and the bike trail was lovely!  It was a wide unmaintained dirt/gravel/paved path as wide as a skinny one lane road and it meandered through a lodge pole pine forest following the curves of the Firehole River.  We couldn’t have asked for anything more perfect.

Once we arrived we spotted Lone Star Geyser as a very large cone shape with water spirting out from time to time at about 3 feet in height.  I might have thought this was the eruption if it weren’t for the geyser log book there at the geyser.  We learned that this geyser went off pretty predictably every 3 hours.  Well guess what?!  We only had a half hour to go!  It was a beautiful spot where the kids could play including a little man-made bridge and an ad-hoc bridge made from downed trees for the viewing area.  Unlike all of the other geysers we had viewed in the park so far, there wasn’t a boardwalk area with signs that warned about fragile geothermal ground surrounding it.  Instead it was just a geyser plopped in the middle of the woods with fairly “normal” forest landscape surrounding it.

Smack dab at 2:30pm, which was exactly 3 hours after its last eruption, Lone Star wowed us with its 15 minute geyser display!  The kids, including ours surrounding Lone Star seemed to take somewhat notice of the giant eruptions happening just yards away from them but most of the time they just continued their play as if nothing out of the ordinary was happening!  Haha!  Our littlest was more excited when she found a ladybug than she was to see the geyser.  Oh well.  They were having fun.

The girls did a great job riding the 5 mile trail.  We didn’t necessarily get home early to not rush making dinner but at least we had some down time at the geyser so it felt less rushed anyway.

That evening we had a wonderful fire that the girls tended to diligently until their bedtime.  It was so sweet and they did a great job!  The girls discussed it and decided that our 6 year old would fan the fire while our 4 year old gathered dry sticks from the nearby area.  It was a good ending to our great Yellowstone adventure.