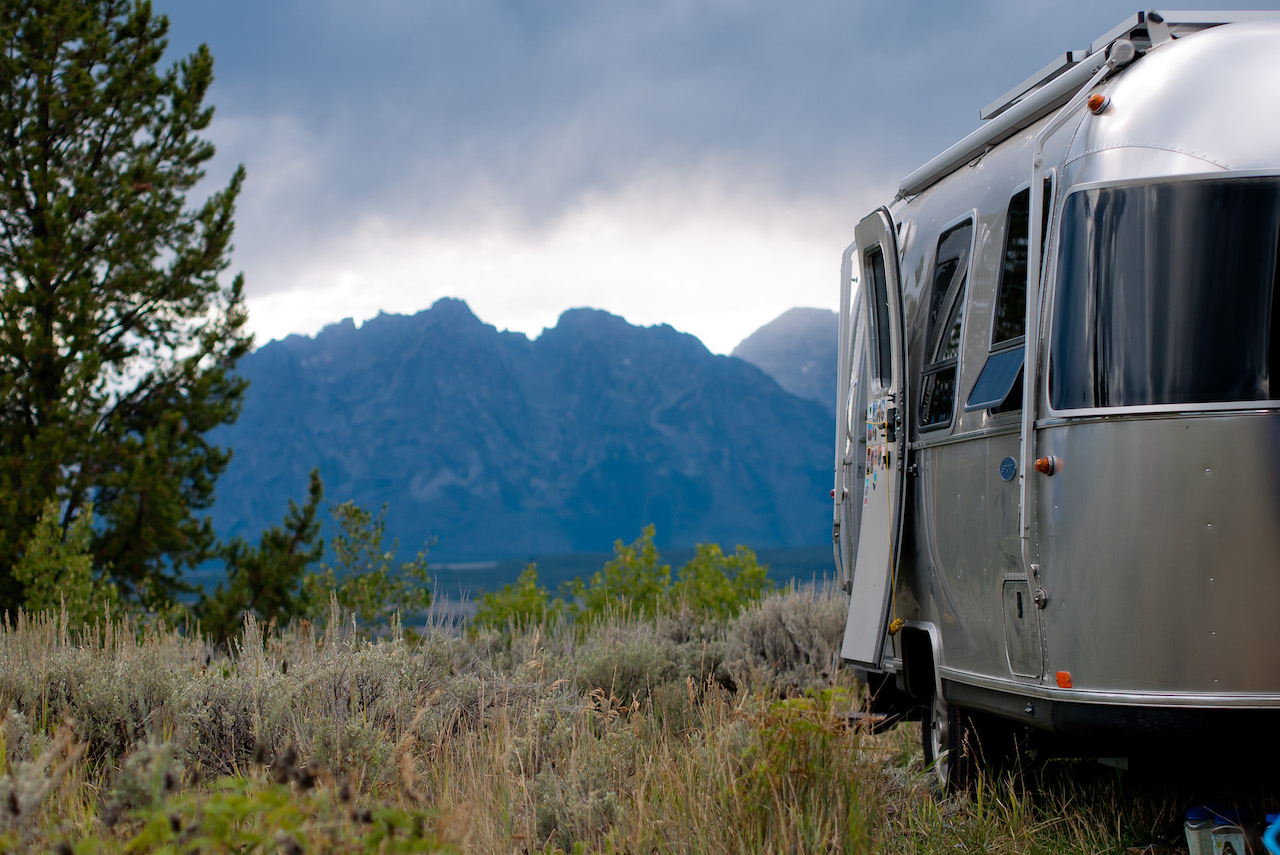 After Yellowstone we drove out of the southern exit and headed toward the Tetons. We took a quick stop at Grand Teton National Park (which I’ll write about in another post), but our final destination for the day was a lovely BLM camp site 20 minutes outside of the park called “Upper Teton View”. The views were stunning and we got to have some much needed relaxation time.

The Upper Teton View campsite was up a very rocky road (we were glad we weren’t attempting to bring our old van Dimes up this hill—eek) which lead to the perfect view of the Teton Mountains!!  The campground within Grand Teton National Park was $32 for a dry site and $50 for hookups.  This was free with a spectacular view!

For our first night there, the best sites were already taken, so we took a site with an obstructed view of the mountains, knowing we would snag a better site as soon as someone else moved on.

We also lucked out that there was a family camping there who had 4 kiddos just around the girls’ ages.  Our 6 year old made friends with the oldest boy and our 4 year old had fun with one of the little girls.

The weather was so lovely and we had fun grilling for dinner to celebrate the warmer temperatures.  It’s so interesting how our appetites for different foods change with the weather.  A salad is the last thing on my mind on a chilly day but on a summer day that’s all I want to eat.  It’s similar with grilling.  On a chilly day I don’t have any desire to sit outside next to the grill and cook.

Our oldest and I watched the beautiful sunset over the Teton Mountain range while we were reading to each other before bed.

Thank goodness!  A much needed down day had arrived.  It seems silly thinking about exploring a place as amazing as Yellowstone and it being exhausting, but it really was.  We were trying to pack in the most we could each day and with that comes a bit of pressure.

The family that we met the day before was staying for one more day which worked out perfect for the kids.  They had the whole day to play!  I used a lot of the day to bake and cook.  I made bread in the solar oven, made a batch of coleslaw, egg salad, hummus and a pot of bean potato soup for dinner.  It’s so nice to have a good home cooked meal.  I enjoy doing it but I really have to schedule it into our down days to fit it all in.  When I was baking in the solar oven a giant Long-Horned Pine Sawyer bug was exploring it too.  It looks like a giant black beetle with extremely long antenna.  I kept plopping him off for fear he would fry himself but he kept trying to come up.  Eventually I gave up and I think he did too.

We also had great internet service here which we hadn’t had in a long time so we caught up on uploading photos and posting blog posts as well as other odds and ends that require the internet.

A couple who had front row viewing “seats” told us there were leaving in the morning so we were able to pull Azul and Wobbles up front where our view was unobstructed.  We were now also right next to the family with kids which worked out great.

The kids made a fort out of camp chairs and sarongs, biked around the cleared lot for the campers and hiked around a bit.  They ended up finding a nice little grassy nook after descending down a steep path.  Our youngest showed it to me after the group of kids were done exploring.  They had told me it was steep and it was extremely so!  It was a warm day so it was nice to have a little cool spot to sit in the woods.

We also had some extra time to make a contraption for our 4 year old to be able to open the screen door on her own.  We had an incident the other day where none of us were within ear shot to help her open the camper door when she had to go to the bathroom and she ended up peeing herself which was upsetting for her.  I rigged up a little pull cord that she can pull to unlatch the door.  I still haven’t thought of a way to help her when the main door is closed but one thing at a time.

Even though this was BLM land there were actually camp hosts here which was really nice.  They were in charge of making sure everyone was following the rules such as keeping food in bear safe containers and drowning all fires.  Well, they came around doing checks and unfortunately our neighbors had left for the day with lots of bear attracting things out.  Luckily they had left their hatch of their camper unlocked so we popped all their things in there under advice of the camp hosts.  Usually, if people are caught not following the rules they are issued an on the spot $250 fine.  It’s nice they check for things like that!  Bears are great and all but we don’t need one camping with us.

That afternoon we just got the edge of a storm that came across the mountains.  Just a little light rain but lots more along with hail and strong winds were in the forecast for that evening.  It’s really neat to see so far off into the distance that you can watch the storm coming!

Closer to the evening is when we got some good hard rain.  At the time it started our oldest was down the hill in the grassy nook the kids had found.  By the time she came back her dirt covered body had turned to mud.  Me: “Oh my goodness!  How did you get so dirty?”  Our oldest:  “Well, we were making dust clouds to cover our body and then it started raining so it all turned to mud.”  Haha!  Of course, dust clouds.  Why didn’t I think of that?!

We spent the evening inside since it was raining hard but had a good chunk of time to work on our Spanish.

That evening it looked like the mountains were on fire during the beautiful sunset.  Overnight was very stormy with all that the forecast predicted.  I was thankful for the walls of Wobbles and our warm wool blankets!