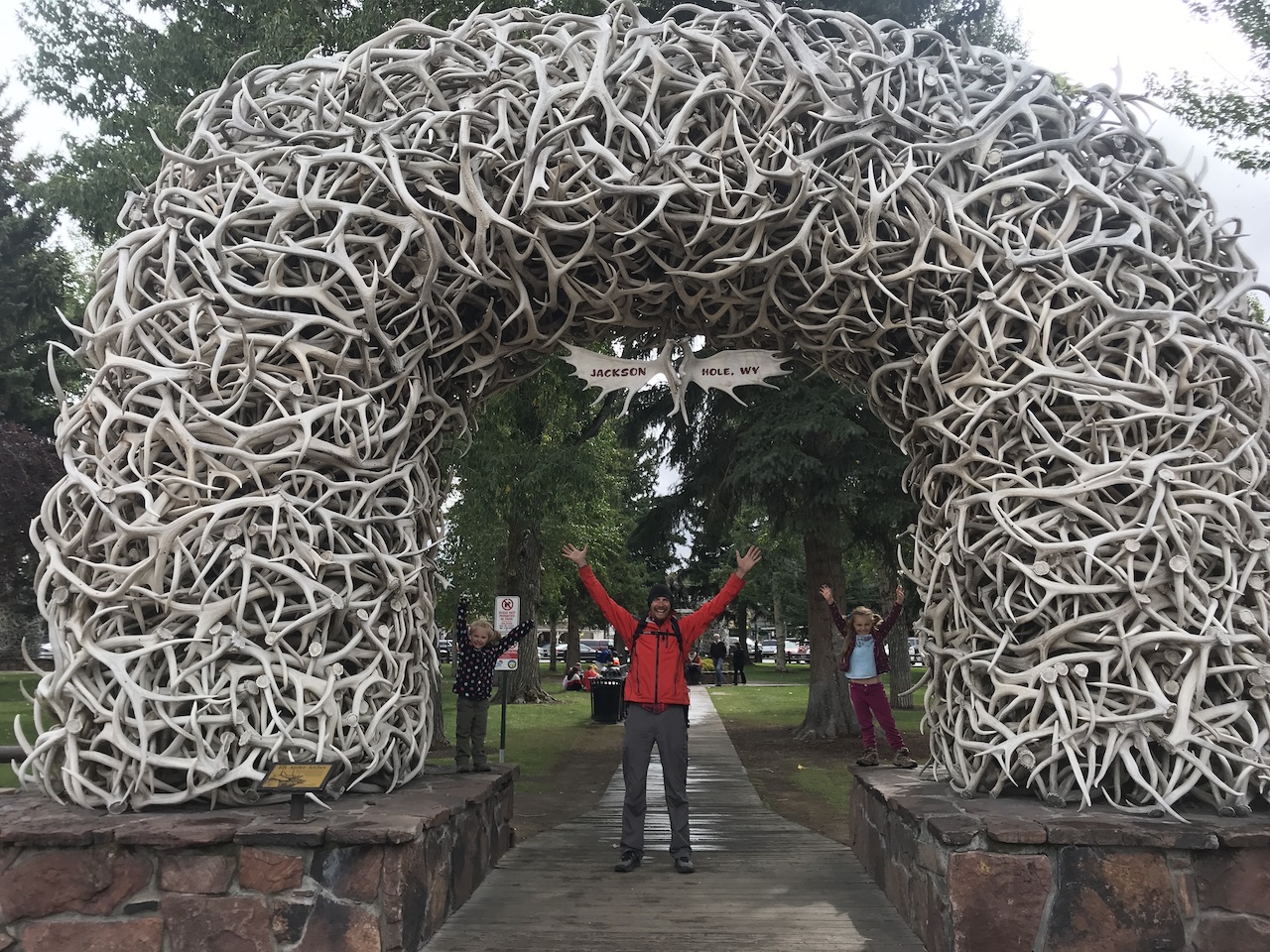 From our camp at Upper Teton View, our plan was to go into Grand Teton National Park on this day, but since the forecast called for a very cold rainy day we decided to make that our city exploring day as we would be in and out of warm dry buildings to break up the cold.

Breakfast at the Bunnery

A perk to this new idea was that there was a great breakfast place Justin had researched that we decided to check out.  The Bunnery (a bakery) which promised delicious pastries.  Can’t go wrong there!!  Well, we soon realized that Justin’s find wasn’t a secret.  The line getting into the restaurant was very lengthy.  Oh dear!  We had given the girls a tiny bit to eat on the drive into town to tide them over but this line did not follow our timeframe for food.  Thankfully we discovered that you could skip the line to get a pastry to go!  Perfect!!  I went up and got a delicious cinnamon twist pastry and let the girls nibble on it while we waited in line for a table.

We spotted a large table for 8 in the restaurant that hadn’t been occupied for some time. Two sweet ladies in line agreed that if they asked if anyone had a large party to fill it we would group ourselves together to make 6 for better odds.  Turned out, it worked!  We dined with our line neighbors who had been friends for over 30 years.  Pretty special!  It was nice having a meal with them.  The breakfast was phenomenal!!!!  The girls got a waffle to share which was packed with nuts and whole grains.  Our littlest said, “it’s just like you make it Mama!!”  Justin got the “Glory Bowl” with home fries, mushrooms, eggs, melted cheese, sour cream and sprouts and I got an egg sandwich on a fresh croissant with hash browns.  It was so delicious!!  Our oldest ate so much she didn’t eat again until 2pm that day!

After breakfast it was still raining so we decided to look at some shops while we were waiting the rain out.  We found a footwear place that was having a sale on sneakers.  Justin thought I might want a new pair since mine had no tread left and gaping holes where you could see my sock through.  As the girls were going bonker-balls I tried on shoe after shoe finally finding a pair I liked.  I wasn’t 100% in love with the giant logo on the side of them but they were really comfortable and had a good tread.  $100 later, I had new shoes!  Hurray!

By the time we were out of the shoe store it had stopped raining.  We decided it might be nice to check out the children’s museum in town since we could get admission for half off (with our membership to another museum).  We were in route when Justin had the idea for me to browse the Jackson shops while he took the girls to the museum. I was itching to look through the shops and some alone time sounded nice as well so I happily took him up on the offer.  Justin is actually better at offering me some time alone than I am for myself.  I was disappointed I wouldn’t see the girls enjoying the children’s museum (it’s always fun to watch them exploring new things) but I knew they would have fun without me too.  It’s important to have alone time to stay sane and happy.

While Justin and the girls were gone, I browsed all the shops I could.  Jackson was definitely into their leather and taxidermy.  All but one of the shops were welcoming and very sweet.  There was this one shop named Overland Sheepskin where the employees were outstandingly rude!  It was a leather and fur shop.  I thought it was just the first sales lady who must be having a bad day but two more of the workers gave me the same horrific treatment.  It was so over the top rude (dirty looks, purposefully ignoring me, demeaning talk, curt answers, waving me off with their hand…) I was half waiting for someone to jump out and sing, “You’re on Candid Camera!”  I think they were a bit confused as to how customer service works!  Very strange and absolutely unnecessary.

There was one shop that had any t-shirt imaginable with “Jackson, WY” printed on it.  A dream come true for a t-shirt lover.  Then, almost my last store I found was one I wished I had found first!  It was called Teton Toys and it was chaulk full of toys, games and school supplies.  Man!  There was so much to look at and so little time!  I ended up buying a little lego set for the girls for on the road (at home they love their legos so much) and a handful of fun mind math puzzle books for the girls.  I only wish I could have looked at their educational games, something I have been looking for, but I realized I hadn’t eaten or drank anything since breakfast and I was starting to feel a bit dizzy and nauseous so I decided I should go replenish myself.  I had been so excited to browse all these places, nourishment took the back burner.  Oops!  I of course had to check out the second bakery in town and get a lemon scone to go.  It was lovely but the Bunnery won best in show for sure!

I wish someone would make a map of all the best bakeries in the US!  I’d follow that map any day.  Actually, that’s a good travel mission for me.  To be continued on this thought.

Justin and the girls gave me a full report on their adventures at the museum.  The place was in a double wide, so fairly small, but the girls had a blast.  They played in the kitchen/grocery store section filling their carts with delight.  The first thing my oldest said to me about the museum was, “Mama, their grocery store was SO organized!  It was so nice and tidy so everything was easy to find.”  My youngest chimed in, “The tomatoes were all neatly stacked in a row.  It was great!  We put everything back before we left.”  Those are my girls.

It was getting close to dinner time and Justin had researched a great pizza place where the girls could run and play in the yard while we waited for our meal.  We arrived at Calico on Pizza Lane (pretty cute, right?) and it was so lovely!  They had a full wrap around porch which they decorated with string lights and beautiful hanging baskets filled with blooming tendrils overflowing like a little waterfalls.  It was so quaint looking with all their wood stacked on the side of the porch.  The wrap around porch overlooked a beautiful green lawn with a white birch tree mural as the backdrop.  Unfortunately it was too cold for them to serve on the porch but we got the second best, a table looking out the window.

They gave the girls a coloring booklet and crayons to work on while we were waiting for food, which they loved.  The girls each got a slice of cheese pizza and Justin and I got a Caesar salad, salmon and greens, and flatbread with seasonal mushrooms to share.  The girls of course shared with us as well.  It was all spectacular!!  We kept exclaiming over our luck of having two phenomenal meals out in the same day!  Compared to the food we had in Yellowstone, anything would have seemed top notch but The Bunnery and Calico knocked the socks off us.  It was such a nice treat that we ALL enjoyed.

On our way out of town we found a used gear shop, Headwall Sports.  We’ve been looking for a couple things for our oldest so we thought we’d give it a try.  Well, we ended up finding what we were looking for and more.  Funny how that happens, isn’t it?  The sneakers that my oldest had been wearing were getting tight and they are a pain in the neck to get on and off.  We ended up finding her a pair of sneakers (ironically enough, to match our youngest’s shoes) and a pair of shoes she can wear in the water.  I also found a pair of used sneakers that fit great!  Yes, your memory serves you right that I had just bought a pair of new sneakers that morning.  However, these used shoes were only $24!  You know what that means.  Off to the first shoe shop again to return the new pair.  The store, Teton Mountaineering, was so very nice about letting me return them even though it said sale items were a final sale.  On top of me returning the shoes, I had also told them I didn’t need the box therefore they had to go recycling diving to put them back on the shelves! I told them the whole shebang and they were happy for me that I had found a used pair that fit.  So very nice.  A good reminder to always look for used things first.