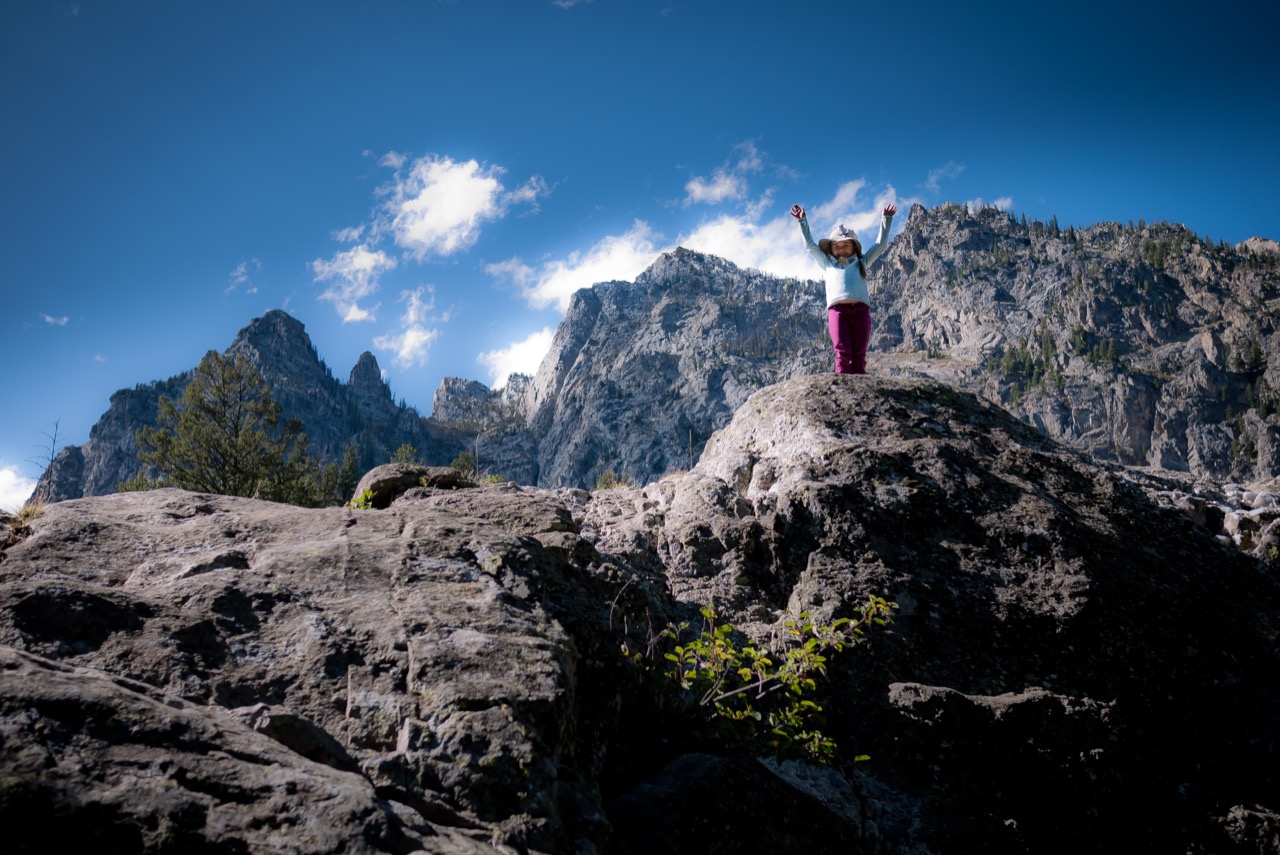 We only got to spend about a day and half at Grand Teton National Park– a half day as were were driving through from Yellowstone, and another full day after. What we saw was a beautiful– it would be a great park top come back to when the girls are older to do one of the more strenuous mountain hikes.

Passing through Grand Teton National Park on our Travel Day

We weren’t sure how much time we would have to spend at Grand Tetons National Park on our travel day from Yellowstone to Upper Teton View, but we thought we’d stop long enough to at-least check out the visitor center, snag some information about the park and what it has to offer and get the Jr Ranger books for the girls.

In the visitor’s center the girls again enjoyed picking up the various antlers and horns from the park animals.  It reenforced what they had learned previously, ‘most are very heavy!’

We had time to read a handful of books in the gift shop (thank you visor centers for always having something different on your shelves for us) and then heard the announcement that a ranger talk on the mating rituals of the big 5 was starting.  The kids were excited so, we went for it!

I won’t give you all the details but our favorite facts were as follows:  A male grizzly bear weighs about 600lbs in the summer.  This weight drops to 400lbs when he wakes from hibernation.  He then looks for a female to mate with loosing all interest in eating for about a month loosing another 100lbs bringing his body weight to half of it’s original weight.  Pretty crazy right?!  Imagine how cranky a grizzly male is if you even come in contact with it in the spring!

Another funny fact was that to get a female bison’s attention and try to impress her, the bull bison rolls around in the dirt!  I’m not sure why this would be attractive, but then again, I’m not a bison.  We actually saw a bull doing this during our Yellowstone visit but we just thought it was itching itself.  In the summer they do this to get a layer of dust or mud on them to help keep them cool but during rut, which is in the fall, this is supposed to be a turn on. 😛

After relaxing for a day at Upper Teton View, and then spending a rainy day at Jackson Hole, we were ready to get back into the park and explore some more. It was the beautiful day we had been waiting for and we took full advantage.

We went to Jenny Lake to explore, hoping that we would spot a moose at Moose Ponds.  As luck would have it, just as we were approaching the visitor’s center we heard, “Everybody get back.  There is a Mama bear with her cubs here.”  Wow!!  How amazing!!  Sure enough, the bushes started waving about and out pops the sweetest little brown puff ball of a bear that I have ever seen!  Oh my goodness.  It was just so cute and looked so incredibly soft.  Then over came mama black bear.  Each took turns standing on their hind legs to get a better look at the crowd they had drawn.  The rangers had everyone standing at a safe distance from the bears of course.  It was so neat to see!

After the bears trotted off to their berry picking elsewhere one ranger had some furs and other information out for visitors to look at and learn from.  I had no idea how thick a grizzly’s coat was!  It was thicker than the length of the heal of my hand to my fingertips.  The base of it was so dense and warm.  The black bear’s coat on the other hand seemed a lot less warm and snuggly.  Maybe this was just in the one they had on display and others were thicker.

We decided to take a hike to Moose Ponds then beyond that to a waterfall (“Hidden Falls”) and then onto a ferry boat and end the day with the boat ride back to near the visitor’s center where we started.  What we didn’t count on were the many trail detours we encountered along the way due to trail maintenance.  This added a bit of distance to the trail for sure.  The rangers said that after it reaches about 57*F outside, the moose bed down until it gets into the evening cool temperatures again.  We had gotten a fairly late start to the day so our odds weren’t good.  Because of this we skipped the Moose Ponds Loop figuring we had a long enough trail ahead of us already.

It was perfect weather to hike in, chilly in the shade, warm in the sun and on such a pretty trail.  The only down side was how busy the trail was.  The girls did such a great job hiking!  It helped that when we got to the waterfall we were surrounded by berry bushes!

I had my eyes on alert for bears also looking for a tasty treat.  None to be seen.  As a distraction on the final part of the hike, our 4 year old told us non-stop stories for a good 45 minutes.  I not only love hearing her stories but it was also a great distraction from the trail as her little legs were getting tired.

By the time we had reached the ferry the girls had hiked 4 miles!  Our little one had been dreading the boat ride the entire hike concerned it might go too fast or sink.  It’s funny because I had told the girls early on about the boat as a motivation for the end but it had the opposite effect for our 4 year old.  She hadn’t remembered riding on a boat.  However, once we got on and started riding she loved it!  It was a short but fun boat ride back to near the visitor’s center, much faster too.

The girls then turned in their ranger books, chatted with the ranger and said their official pledge.  The ranger leading them in the pledge positioned them near the fireplace and made sure she was wearing her ranger hat.  It was very special.  The girls were a little nervous and got the giggles but they did great.

At the last visitor’s center on the way out, where we ended having dinner from out of Azul, we found some neat recycling machines that crush the glass, plastic or tin when you put it in.  It then shows you what it looks like crushed up into small bits as the side of the machine was made of glass.  The girls were amazed!  Long but fun day.