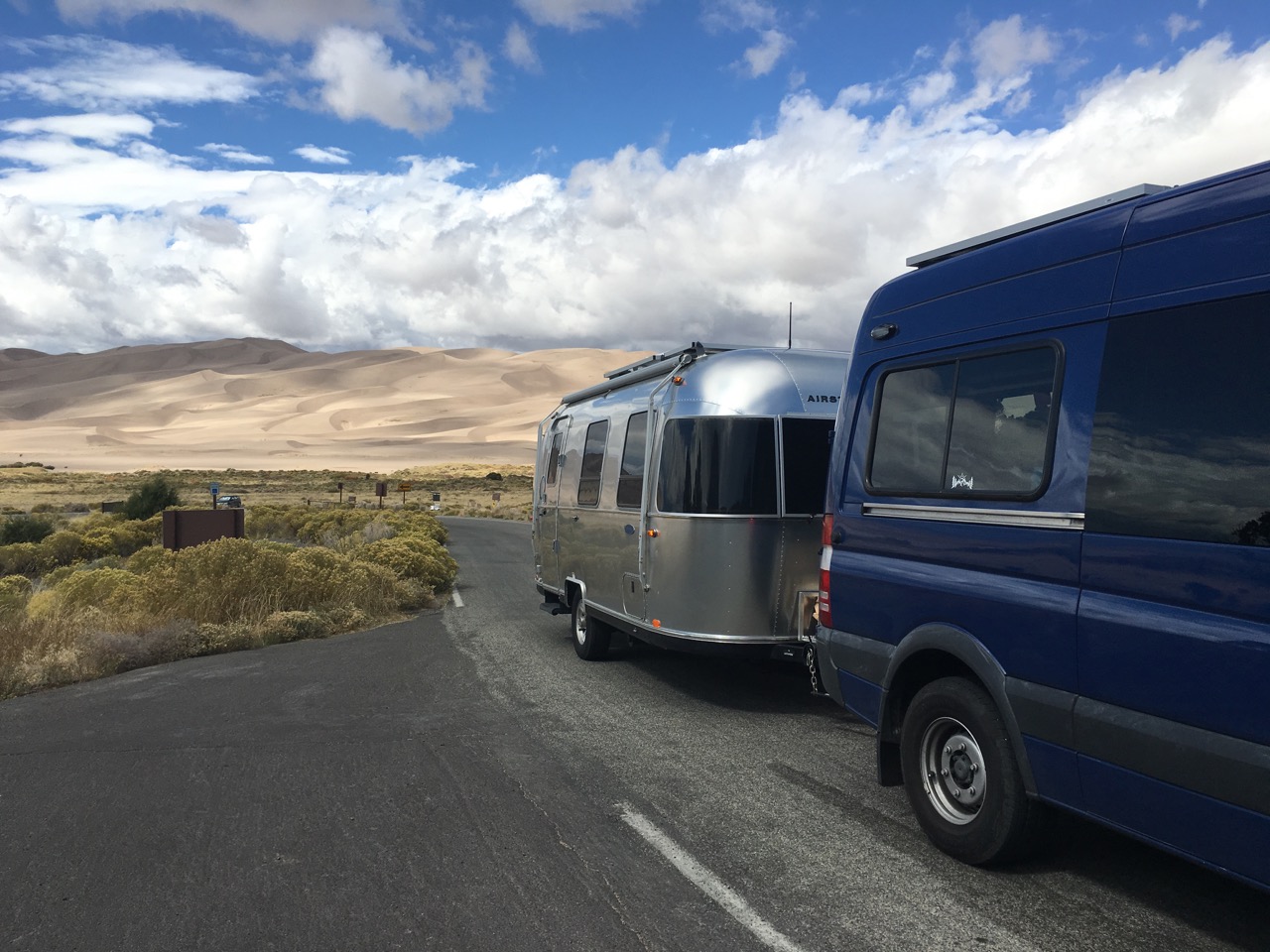 We arrived at Great Sand Dunes National Park on a very windy afternoon.  The sun was out and it was a lovely temperature but when we thought of exploring the sand dunes in high winds, it didn’t sound too appealing.  Instead we decided to hang out in the campground, let the girls play, relax and catch up on some internet stuff like this blog.  Internet is fairly hard to come by so we try to take advantage when we do have it.

We found that we made the right choice in waiting to explore the dunes.  Not only was it really windy but a storm actually passed over the dunes bringing rain and more wind.  Wet sand plus strong winds equals a messy hike for sure!

Sadly, while we were tidying up Azul Justin got whacked by one of the back doors of Azul.  The doors do stay into a clicked open position if we are on level ground.  But on this particular day it was extremely windy and the door blew shut on him.  It whacked him pretty hard on the upper back.  I was so thankful it wasn’t on his head as it was only a handful of inches away.  We iced Justin’s back and the girls pampered him with hugs, love notes and coupon books for him to spend (these things are like GOLD).  Amazingly the door didn’t leave a bruise, just a red spot as big as a pinky nail.  It’s sore though.  Isn’t that odd when on the outside an injury looks like nothing more than a slight bump yet it stays sore for so long?  After all the pampering Justin said, “Huh.  I should hurt myself more often.  This is nice!”  Silly Dada, as the girls would say.

The girls have sticker charts and different ways to feel good about when they succeed at something they are struggling with.  So, I thought why shouldn’t Justin and I have one too?!  Both of us feel better all around when we are getting regular exercise so I made us a chart for a little incentive (and…I love making things like this!).  If we do two sets of exercises per day we get a 5 minute massage from the other spouse.

Sadly, our 4 year old is still trying to fight off athlete’s foot.  It is such a tricky thing for a little one to have as she wants to run barefoot like her sister and play in the water since it’s nice weather.  One thing to be said is, this girl has the cleanest and best smelling feet in our family!  The athletes foot lotion twice a day wasn’t doing the trick so I have now added treating it with tea tree oil and medicated foot powder as well.  We’ll see if it works any better but in the mean time, this little lady smells good!

Onto the visitor’s center we went to pick up Jr Ranger books and learn about the area.  We brought our little fox and raccoon in place of our children to discover that there is magnetic sand in the sand dunes.

If you take a magnet to the sand, it will instantly attract a ball full of black magnetic sand.  It was really neat to play with for both the girls and me!  The girls also made friends with a little stuffed kangaroo rat and read some books.  It was a nice easy going day

On our way to our hike we spotted a whole herd of deer grazing just inches from the path.  There were 5 bucks that we counted.  Mule deer are really very beautiful and so cute looking with their large ears.

We started our exploring late morning while it was still cool.  Signs warned that in the summer the sand gets to 115*F.  Isn’t that crazy!!  Thank goodness it wouldn’t come close to that temperature on a fall day.  Our poor little girl wanted so badly to walk on the dunes with her bare foot.  I didn’t like this idea one bit and gave her what I thought was a good option; wearing socks with her crocks.  I was wearing socks with my Velcro sandals so I thought maybe that would help increase her willingness.  She didn’t bite and still desperately wanted bare feet.  I won’t go into details because I don’t want to call anybody out but, I was out-ruled and she went bare foot.  To be continued with the repercussions of this decision.

Off the girls flew onto the dunes with excitement and motivation to “reach the top.”  It was amazing!  From a distance the dunes looked substantial but when we got up close they were phenomenally big!  These are the tallest sand dunes in North America.  It just went on and on forever it seemed like.  Let me just say that distance on the sand dunes is extremely deceiving!  It seemed like we had been walking so far and then we’d look behind us and still see patches of dune grass!

The colors within the sand were amazing; Blues, greens, reds, pinks, yellows, white, black, grey and oranges.  To think of how many different kinds of rocks were within that sand was pretty neat.  These dunes stay about the same height despite the almost constant wind.  The wind blows the sand from the lower ground up to the dunes and stopping at the place of the dunes only because of the mountain barrier behind them.  Then the rain washes the sand back down to the lower ground and the wind starts the cycle again.

Because the dunes were so gigantic and we entered through a path less used, fairly soon after we started hiking up the dunes we found untouched sand.  The girls had a ball making marks in the sand and being the first to make footprints through it.  It just looks so pristine with the wind shaping the sand instead of humans.  Up, up, up we climbed with more frequent breaks from the ladies as we accented. Along the way the girls made mini castles, sand angels, and slid down the sides of the dunes and climbed back up.

Our little girl found a stowaway on her back during the climb.  A sweet ladybug hitching a ride on her back.  Don’t ask me why it was all the way out on the sand dunes but it made hiking for the next 10 minutes or so more fun for our little one.

The girls were losing steam so we found a place where 3 dunes intersected, creating a little crevice where the wind wasn’t so strong.  Though we were eating egg salad sandwiches we weren’t thrilled at the idea of them becoming real SANDwiches!  Within this nook there was also a really neat cliff-like edge of wet sand that the girls had a ball playing in.  It was a relief to their feet as the sand was getting warmer as the day wore on.  I offered the girls their shoes and socks but they declined over and over.  I was quite comfortable in my socks and sandals.

We let the girls play in the wet sand until we feared we wouldn’t make it back with any steam left in them.  You would think that the way back would be a lot faster as it was mostly down hill.  Well, you would be wrong.  Going down involved extremely slow scooting on the buns for the girls.  They were nervous to run down and the sand was uncomfortably warm so scooting was a better option for them.

The sand actually made a really neat squeaking/tooting noise as we stepped or slid down so that made it extra fun for scooting.  Justin and I both ran down a steep dune together and halfway down fell to our buns and the neatest thing happened.  The whole side of the steep dune started cascading down toward us making a very loud thundering vibration noise.  It was amazing!  It was if a mountain was growling at us.  We could both hear and feel it which stopped us both in our tracks in awe.

The wind was pretty intense on the top of some of the dunes we topped.  We could feel the sand biting our legs as the wind whipped it at us.  You had to be careful who was around when you walked because the sand would be swept right away potentially into our girls’ eyes.  Though the wind wasn’t super pleasant in combo with the sand, it was neat to look at the ridges in the dunes when it was blowing.  The once crisp edges of the dune contrasting to the sky behind them became a fuzzy hard to determine line where the sand was blowing.

By the end of our 3 mile hike on the dunes our little one was done!  She was crying and saying she was tired.  So, silly me, I thought she was tired.  Come to find out, her sweet little feet were bleeding!!!  Her feet had not healed and our sweet little one had been tearing open her feet on the rough sand.  It was so sad.  I felt terrible that we had let her go barefoot instead of insisting she wear socks and shoes.  I felt like just a bad parent and was disappointed in myself that I hadn’t made her protect those little feet.

To make matters worse, she wouldn’t let me carry her because she didn’t want to lose her dime for the hike.  Oh boy!  She finally let us carry her and the girls and I stayed at the base of the dune for a ranger event while Justin walked to get Azul to pick us up.  I think we all brought back a quarter of a buckets worth of sand into Azul and Wobbles that evening.  Justin and I both were done with the sand.

The next day the girls earned their Jr. Ranger badges and we were off to our next destination!

We spent the next night on BLM land next to an old abandoned ranch. We weren’t sure at first if it was a good idea for fear that people may be living in it but after proper cautious inspection we saw that the cabin was in such bad shape it was inhabitable.

It was really sad because it looked like it once was a very pretty home. It had a pit toilet out back so it was either a fairly old place or used by folk leading a simple life.

It felt like we were on a real ranch camping next to the old wooden fences. Unfortunately, since everything was so stinking prickly the girls didn’t play outside much. They did have a lot of fun playing house in Wobbles though and I got a loaf of banana bread to bake in the solar oven. Much better success with this than the previous carrot cake that basically plopped out in pieces.