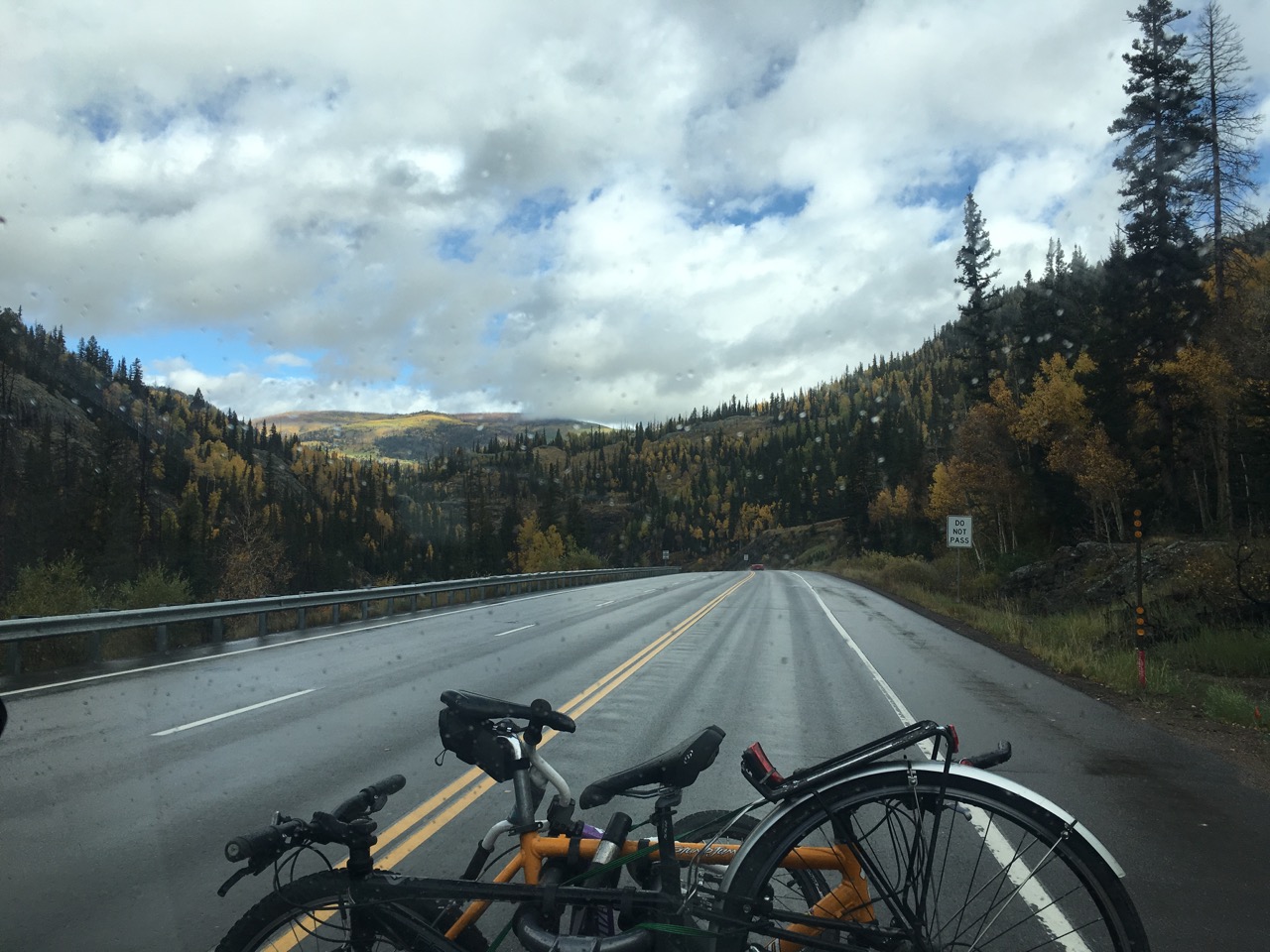 During the day we explored the sweet little city of Durango, CO.  Our plan was to camp 30 minutes outside of town on National Forest land.  Since we were loving exploring the city so much and thought we had camping pretty much figured out for the night we decided to stay as long as we could in Durango so we wouldn’t have to rush back to camp for dinner.  Therefore we ate dinner in the city as well.

By the time we left Durango it was 6pm.  Just the perfect amount of time to get to the National Forest land, set up camp, get the girls ready for bed and start reading time by 7pm.  So we thought anyway!  This is where our evening adventure started.

The first National Forest area that we looked at was near dozens of underground natural gas lines with signs warning campers not to smoke or have a campfire due to methane gas leaks!!

What?!!  That’s so scary!!  There were literally 3 underground gas lines surrounding our camper when we pulled into a site.  There was only one site on the land that wasn’t surrounded and that, of course, was taken.  Justin was really pushing for us to stay as it was time for the girls to be getting ready for bed and reading time to start soon.  I was pushing for us to move on.  If smoking wasn’t advised because of possible explosions, what were we breathing in?  The girls sided with me after I told them about the risks of staying in that area.  After Justin read an article titled something like, “Natural gas pipes explode with surprising frequency” he sided with us too!  Thank heavens!

No problem, we thought, there was a federal campground just 15 minutes away for $11 per night.  That we could handle!  We prepped the girls for nighttime reading on the road.  We arrived at the campground; CLOSED!  What?!  Okay, no big deal, there was another option just 20 minutes from there.  This time we got the girls dressed into their jammies and pulled over to have them use the bathroom as bedtime was approaching quickly now.

Arrived at the next campground; CLOSED!  Next one, closed!  We soon realized that ALL the many federal campgrounds along our route were closed.  We were mostly out of cell service with glimmers here and there to help load maps to try figuring out new options.

We were getting desperate!  We were coming up to the town of Pagosa Springs CO so we thought we may find some options there.  The town was super cute but also pretty pricy for camping options.  The cheapest we could find was $50 per night.  Since we were only going to be sleeping there and leaving first thing in the morning we couldn’t stomach the cost.  We don’t mind paying that kind of fee when we are using their laundry, showers or pool but for just a place to park for the night it felt silly.

Justin was driving while I was franticly looking on all our camping apps for some alternative options within the city.  There were two places that came up, one was Walmart and the other was a parking lot across from a restaurant at the edge of town that truckers regularly frequent.  At this point a Walmart parking lot was sounding like a pretty good option.  Proper etiquette is to go into the Walmart and ask the manager on staff if it is okay to sleep in the parking lot.  I called ahead of time to see if they allowed camping since Justin informed me that not all Walmarts allow you to do so.  Guess what?  This city does not permit Walmart to let people sleep in their parking lot.  Blah!  Justin and I discussed sleeping at the trucker’s stop but decided it was too sketchy with the girls.  Onward we went.  Back into National Forest land (Rio Grande).

Up, up, up we climbed.  It was now past the girls’ bedtime so we told the girls to try falling asleep in the van.  It was getting very challenging to find potential camping spots as it was dark now.  We were traveling on a 60mph road therefore noticing pullouts or national forest roads in time to safely stop was nearly impossible!

We read about one forest road where reports told about 1-3 good sites (and the rest of the land was not camp-able).  We didn’t have any other options so we gave it a try.  Before we drove on the the dirt road we peaked at the satellite and it looked like there may be a handful of good pullouts.  We quickly learned as we took Azul and Wobbles up the steep switchbacks that the areas that appeared to be clear were actually steep grassy hills.  The review was spot on, there were 3 camp-able sites and all were taken.  Now the hurdle was finding a place to turn around.  There was a junction that we decided to use as a turnaround.  Boy, it was tricky!  The main road was uphill and the jackknifed connecting path was steeply downhill.  Our old van Dimes never would have been able to do it.  Thankfully with the use of our trusty walkie talkies, Justin’s good driving and Azul’s extra torque Justin was able to do a 5 point turn to get us out of there.  It was so close and so scary!  What a pickle we were almost in!  The whole endeavor on this road took us about a half hour.

After this experience we decided we would try to just drive right through to Sand Dunes National Park where we would be headed the next day.  However, this plan was altered when our oldest was not falling asleep in the car and it was already hours past her bedtime.  We tried another last ditch effort to get some sleep.  Thankfully by this time our little one had fallen asleep.

We had climbed up to the chilling elevation of 10,500 ft!  My ears with a cold were not loving this pass.  On the way was an unexpected ski area!  Haha!  We read reviews of some camping along a forest road about 40 minutes up ahead so we gave it a try.  Upon pulling off the highway, the forest service road off of the initial paved entrance looked fairly narrow and bumpy in the dark.  We looked at the satellite and it didn’t look like there were any easy spots to turn around in if camping didn’t work out.  We decided even though it was fairly close to the main road, the entrance to the dirt road was large enough and level enough to camp in.  So, we parked, turned on the heat in Wobbles and transferred our sleeping little one into bed and our very tired oldest up to her bunk as well.  Not ideal but we were very thankful to have finally found a safe place to sleep for the night.

It was a sleepless night to say the least.  First of all, Justin was up a handful of times in the night to use the bathroom.  I love Justin dearly but having a squirmy sleepless spouse is enough to make anyone spiteful toward the squirmer!  As if the storm that passed wasn’t jarring enough!  Throughout the night it poured, hailed and sleeted.  I tell you what, hail on the roof of a metal Airstream roof is not quiet.  Justin was worried the camper was getting dented and I was worried the roads were going to be too icy to travel on, stranding us for another night there.

Thankfully, we woke to temperatures just above freezing and no ice on the ground.  Yes!  The girls woke up bright and early, because that’s how they work and we were able to take off to Sand Dunes and civilization!

What an adventure!  We have well noted that looking for camping in the dark when we have little to no information on where spots are is not a good idea.