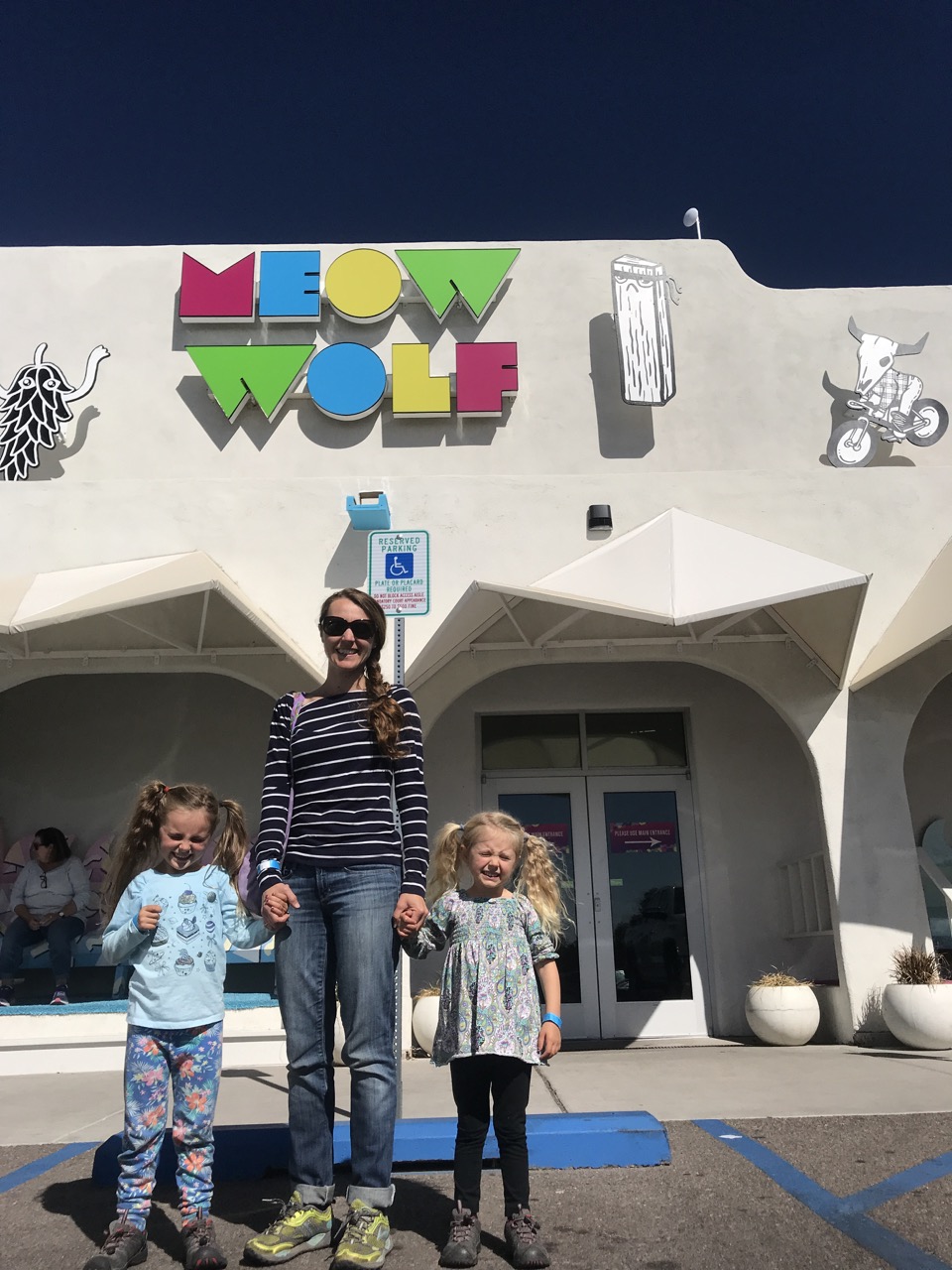 What on earth is Meow Wolf?  And what kind of name is that anyway?  Well, I’ll tell you the name sounds fitting after you have been to this strange world!

We didn’t quite know what to expect when we entered Meow Wolf.  Only the vague spacey general information they gave on their website.  It sounded fun though so we signed up!  When you get tickets you buy them for a specific time slot, this is just so that they have different waves of people coming in at a time.  You can stay for as long as you’d like, but as we found, there is a limit to what your body can handle there.  We knew it was our time to leave when we started getting dizzy on stimulus overload!

You can opt to go through collecting clues and solving a mystery but that sounded like it was too advanced for our girls.  As we saw others collecting clues by sifting through pages upon pages of documents we knew we had made the right choice.

What a cool and totally bizarre place it was! The whole place was dimly lit and had endless passageways and secret entrances and exits some large and some so small I had to twist and turn my body to fit through the crevices.

It was a magical place that started out inside a house and led into all kinds of fantasy places such as a cloud world, a campground, an ice land, the Bermuda Triangle, a tide pool and so many more.

The whole place was basically psychedelic art installations with trap doors and passegeways connecting them.  It was even more confusing with the 3D glasses we wore through it.

Two of my favorite passageways was through a washing machine door (I know! Super crazy right?) and one through the refrigerator.

Throughout the exhibit there were performers doing their crazy things.  Most were moving around in odd modern dance ways, some were asking folks for directions and had a whole script they were acting out but all were dressed in the most crazy mismatched strange outfits you could ever dream up.  It added to the oddity of the whole thing for sure.

The tide pool place was really clever, it was all made from old carpets and other upholstery.  There where couches that melded themselves right into the landscape and sea starts made of pink shag carpet.  So much of it was interactive wether it be making music, having the lights follow your movements or pulling levers or twisting knobs.  This place must have been a blast to build.