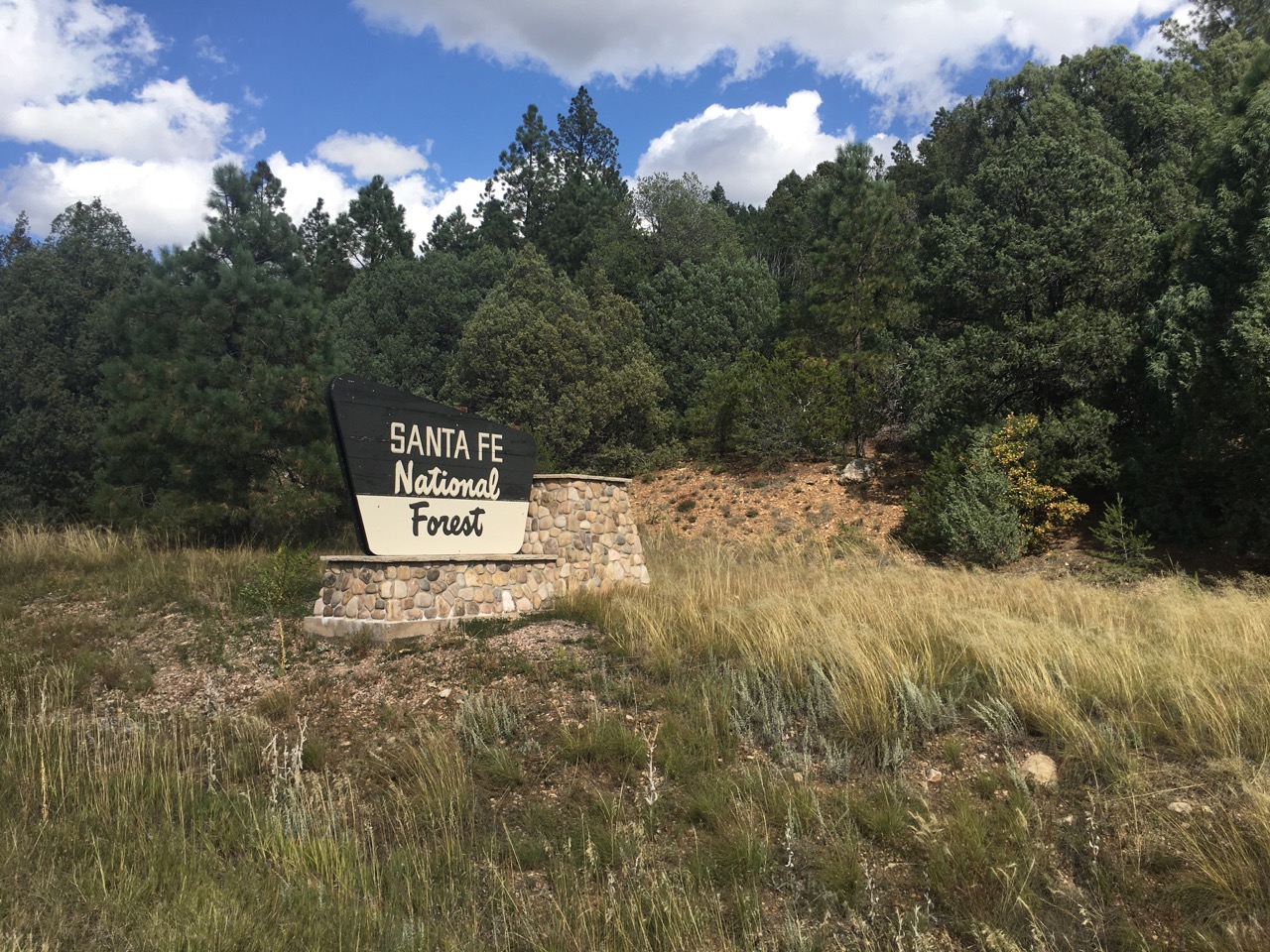 After we finished at the Balloon Fiesta in Albuquerque we were exhausted and hankering for a down day, preferably with internet.  Well, half of our wish came true.

As we drove into the Santa Fe National Forest Justin had a couple sites he had pinned on his map.  However, almost immediately after entering the side road, Dalton Canyon Road, which the sites were along there was a ginormous puddle and the road looked narrow.  It was enough to make us concerned with the road quality up ahead of fear we might not be able to turn around if camping didn’t pan out, so sweet Justin popped on his bike and scouted the road out.

He came back from his scouting mission with high hopes for a beautiful secluded spot in the woods just a mile up the road.  Boy, how a mile feels endless on terrible roads.  It was a doozy for sure!  I thought a couple times the hitch was going to break right off from all the potholes.  Our little one was totally wiped out and fell asleep on the drive to the forest so during the bumpy ride I sat in the back and held her head so it didn’t fall off!

Kids are just so stinking cute when they are sleeping!  Justin and I always go through a couple of phases of emotions when our girls take naps once in a blue moon.  At first we are relieved that they are finally getting the sleep they need.  Then we Ooo and Ahh about how cute they are and how we are so lucky to have these sweet girls.  Then we start getting concerned that they are sleeping too long and worrying how late that will make their bedtime.  We go back and forth debating whether we should wake them or not and almost always decide we should let them sleep with a pang of wishing they didn’t take a nap in the first place.  Haha!  What crazy parents we are.

Anyway, we got to the spot Justin had scoped out and it was beautiful!  It was a large clearing in the middle of a fall colored forest.  An actual forest!!  With tall trees and streams!!  It was chilly and with no cell service but a great spot for sure.

That is until another RV showed up.  We looked out the window to see that a group of three guys pulled up and were looking a little rough.  By that I mean they were smoking, spitting, shouting and letting their trash blow out of their RV.  After talking to them I found out that they were planning on camping farther down the road but fell short on gas so they stopped here.  We were giving them the benefit of the doubt that they were kind people just wanting a place to hang out and camp with no shenanigans.

We thought this until after our girls had gone to bed and a sketchy truck drove up, did something with the 3 guys and then peeled out driving way too fast!  It really made us nervous.  By this time the guys were hammered and their volume had gone way up.  I worried they would try to drive off in the night and drunkenly not see and hit us.  We debated leaving since we weren’t sure if other sketchy vehicles would come in the night but that would involve waking both girls up after an exhausting couple of days and trying to find a new site in the dark.  We thought we were probably better off staying and just leaving on an outside light to increase visibility.

It all turned out alright in the end.  Nothing happened and as far as we knew, no other vehicles came and went.  The RV and it’s crew ended up leaving fairly early in the morning I’m guessing due to the low temperatures.  It got down to 14*F.so I bet they were pretty chilly with no heat!

The next morning we let the girls play for a bit in the crisp fall air.  The girls were building “traps” for animals.  They dug shallow holes, filled them with ash then covered them with twigs in hopes that an animal would step in it and leave its tracks so the girls could identify it.

We were off by late morning to find a spot with cell coverage.  I was feeling like I needed to connect with people and we had guests checking into our Airbnb so we wanted to be sure we were available.

We stopped on our way at a spot Justin thought had an easy rock climb for the girls.  After lots of searching on Justin’s part, it wasn’t found.  But we did find a lovely spot down by a river for the girls to play for a bit before continuing our camping search.

Going closer into Santa Fe we thought we might have more luck with coverage.  This proved to be correct!  We found a great large open spot, Caja Del Rio, that was only 15-20 minutes from the places we wanted to explore.  We were still in Santa Fe National Forest land, but on the opposite (west) side of Santa Fe. The only down side was we were in desert territory again, aka, prickly land.  We had such great bandwidth that we even got to Skype with my sister.  Such a nice treat!

I’m putting this part in as a warning for all the sewers out there.  I begrudgingly went to the Santa Fe Joann Fabrics to get a long list of things for projects I had come up with for along our journey.  The store was SO crazy disorganized is was a huge feat to find things.  It actually took me so long I had to ask them to hold my cart for me because we had reservations somewhere.  The fabric was tossed on the dusty floor behind mounds of boxes, the cuts were terribly inaccurate and fabric that I found in a heap on the floor in the 60% off sale “pile” ended up NOT being on sale yet they wouldn’t budge on price since it had already been cut.  I was not happy to say the least.  The workers were nice people but whoever is running this store needs to rethink things.  Do not go here.