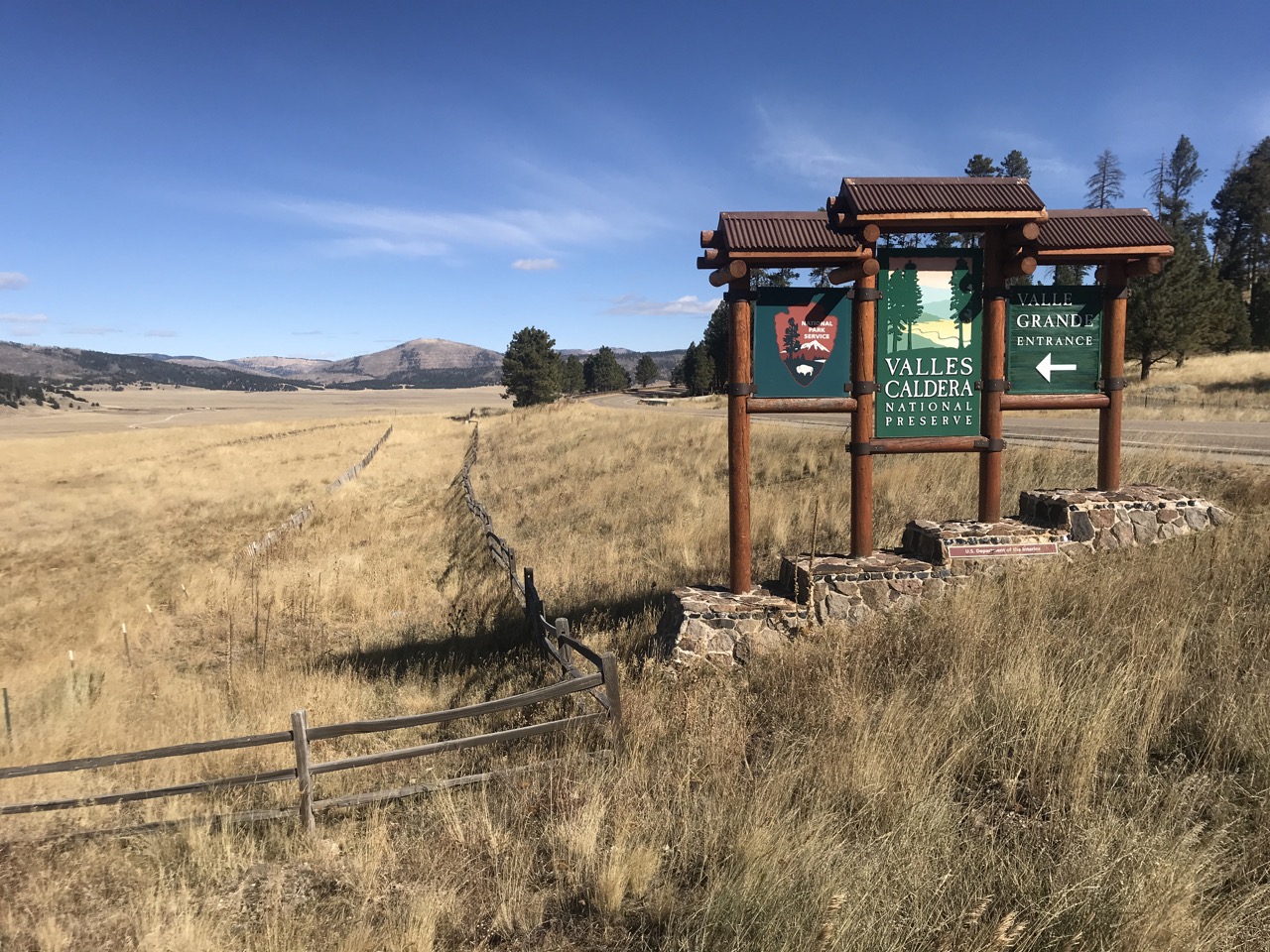 We ended up going to Valles Caldera since it was so close and we wanted to see the source of the volcanic eruption that had created and helped form all those amazing caveats we saw at Bandelier National Monument.

The road that enters the preserve goes up and over the rim of the caldera then into the caldera itself where the visitor’s center is.  We have seen some caldera’s before but none so obvious as this one.  The center of the massive eruption is now a grassland home to prairie dogs and elk among a host of other wildlife.

We arrived on a particularly cold and very windy day.  It was so pretty watching all the tall grasses of the caldera sway with the heavy wind.  It almost looked as if we were under water and the water currents were creating the wave-like patterns in the grass.  So interesting isn’t it that nature’s forces bring about very similar patterns?

We blew into the small visitor’s center within the caldera and learned more about the preserve through the girls Jr. Ranger experience.  The area is teeming with pumice and obsidian rock which are both so fascinating.  The girls took part in a Jr. Ranger scavenger hunt around the visitor’s center to earn their badges.  It was fairly easy but super fun!!  The girls had to go around collecting clues which would then lead them to a task which they had to complete and also paired with a bit of information about the preserve.  At one point while learning about branding cattle, the girls had to brand “the person who brought you here” with a stamp.

Another tid bit that the girls learned was bout tagging cattle.  This led to the task of “tagging” a ranger with a paperclip and label without them noticing.  It was a hoot for all of us!  All of us were in a fit of giggles.

Finally they had to lasso a horse to complete their tasks.

We read the one children’s book they had and the girls did their pledges after having a conversation about the park with the ranger.

Our plan was to do a short hike around the inner volcano peak within the caldera but the rangers were advising visitors not to go on any hikes as many trees were falling due to the high winds.  Ah well!  We weren’t super heart broken as the wind was bitter cold as it blew right through you.

In the parking lot as we were deciding where to go next, we saw a prairie dog popping its cute little body out of it’s hole within the cattle fences.  It was the first time we had seen one in the wild as a family so it was really exciting!  Why he was out on that cold day is beyond me but regardless, we were happy he made an appearance.

The girls enjoyed using the binoculars from inside the warmth of the van to spot wildlife.  We collectively decided taking a family photo next to the sign wasn’t worth getting out in the bitter cold so, Azul got a picture instead.