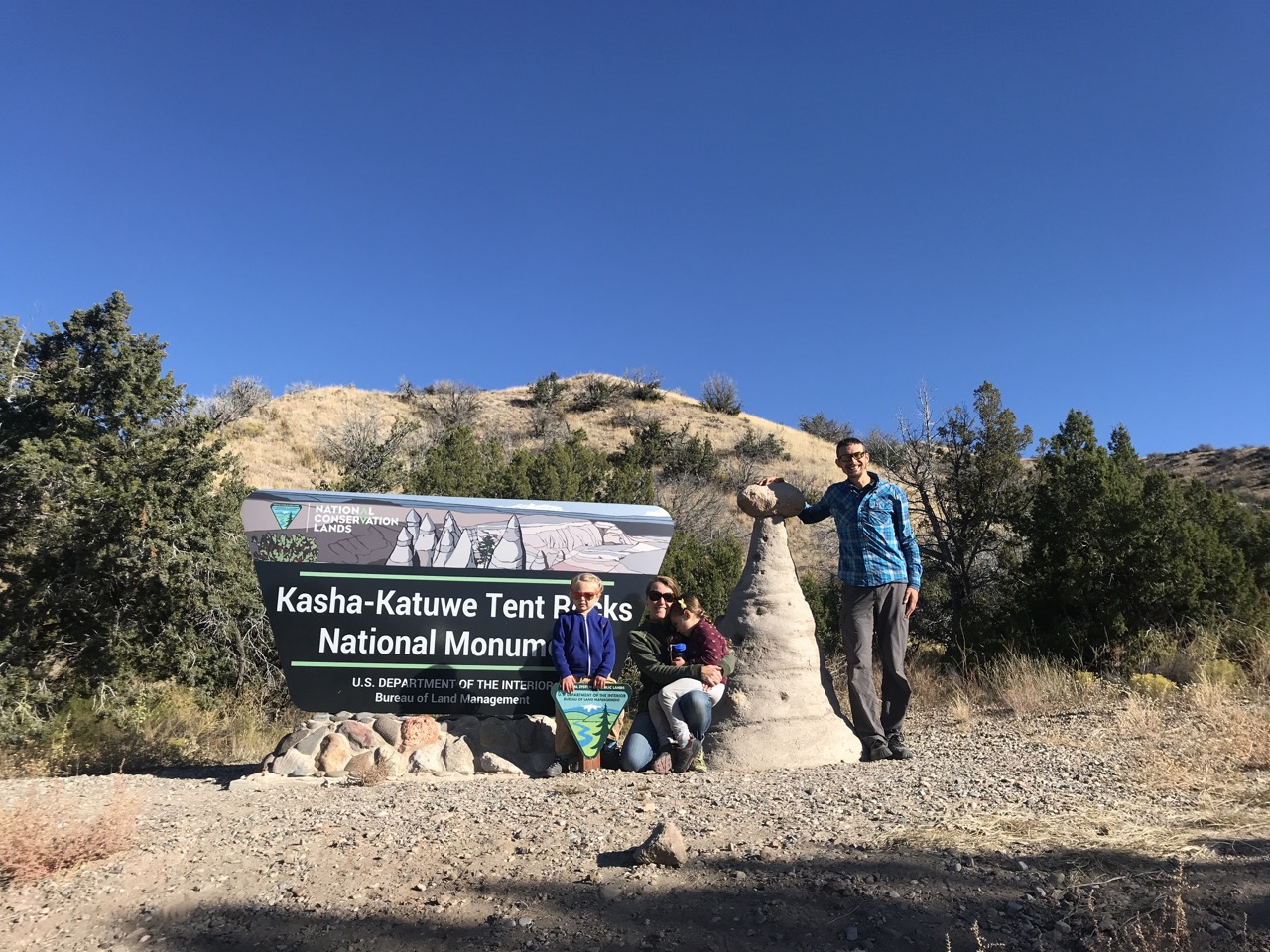 This was an incredible monument with such a great slot canyon hike!  What they are referring to as “tent” rocks are hoodoos made from igneous rock and through erosion have become visible to us.  Many of these tent rocks had giant boulders balancing on top of them which is a pretty incredible sight!

Before I get into the monument and the hike I have to say that our 6 year old lost her first tooth!  It had been crazy loose for about a week now and finally on Oct 22 she asked me to give it a pull for her with the understanding that if it started to hurt she would raise her hand and I would stop.  It was so loose that when I pulled at it there was a very faint pop and the tooth was in my hand.  I barely had to pull.  It was so minor that our oldest didn’t even know I had pulled it at first until she saw it in my hand!  Ha!

She was lucky enough to have been visited by the tooth fairy.  She woke at 6:45am but insisted on waiting until 7am to look under her pillow since she had told the tooth fairy she wouldn’t look under until 7am.  She patiently waited and found that the tooth fairy had left her quarters and Mexican pesos.  If you couldn’t guess, now she is itching to go to Mexico to spend her pesos.  She says she’s going to buy herself some tortillas!  Yum!  It’s so fun to see such joy in a kiddos eyes when something magical happens.

We camped at Cochiti Lake Recreation Area so that we would be close to Tent Rocks National Monument.  The campground is cute being positioned right next to Cochiti Lake and each site had a little shade structure and lamp post next to it.  They also had showers which was VERY exciting for me.  One of the first things I did was to use their showers.  Sadly the water was cold so it was a painful time shaving my legs.  I later found out the trick about the showers.  Turns out the men’s room had hot water!!  So, I ended up sneaking into the men’s bathroom to take a shower on our last day.  I’m at the tail end of a cold so when I coughed I had to make sure my coughs sounded manly.  Haha!  And, no singing in the shower for me!

We had been having a hard time in the last couple towns finding organic bell peppers for a good price and since the girls really like them and we want them to encourage them eating good food we were in a bind.  However, the last grocery store we went to in Los Alamos Justin found a great deal on them so he stocked up.  This, in turn meant that I needed to incorporate bell peppers into a lot of our meals so they didn’t go bad and so we could have some fridge space back (they don’t pack down well).  This is always a fun challenge.  As two of our meals we ended up having eggs in a pepper frame which was a big hit and enchiladas which all enjoyed except my little one.

The girls started off the morning with a dress up dance party.  Everybody does this, do they not?

Then we headed to the slot canyon.  We learned as we entered the hike that sadly we weren’t able to bring our pet lamas on the trail.  Man!  It would have make it so much easier to climb those rocks!

We were welcomed on the trail by a Pinacate Beetle (aka Stink Beetle).  Their legs are so long and they are just so big it’s fun to watch.

Right from the start, the trail was amazing with breathtaking views of the hoodoos and such distinct vivid layers of rock within the hillsides.

The rocks that formed the slot canyon resembled very rough cement which was quite sharp to the touch.

Just before the canyon got narrow there was a beautiful old Ponderosa Pine Tree that had survived years of erosion yet still stood tall yet with much of its roots exposed.  It was calling for the girls to come and climb it.  One of our 6 year old’s happy places is when she is in a tree.

The girls played and played on this beauty.  They even were so lucky as to find a sweet fluffy gray desert wood rat living in a hollow.  It looked like a baby and just let us watch it as it sniffed the air and nestled into its home.  What a treat!  Our oldest climbed and shouted, “You’ve got to come over here!  There is a mouse or something furry in the tree!!”  Sure enough, there it was!  So cute!

The nooks and crannies and narrow passages of the slot canyon were beautiful!  When we were in the narrowest parts of the canyon the light filtered down in like we were on a movie set or somewhere magical.

It was like a dream world with the white and orange walls of the canyon and the walls forming such organic patterns, one flowing into the next.  The girls didn’t have to run far in front of Justin and I for us to loose sight of them completely behind the twists and turns the water had once made.

The hoodoos were amazing to look at as well.  With their triangle shape some being so pointy at the top often carrying the burden of a giant boulder on top they resembled a Christmas hat!  There was one set of hoodoos we named Madana.  I bet you can guess why.

Through the more narrow parts of the canyon we found dozens of caterpillars.  They had black and yellow bands on them with orange bumpy bands on top of the yellow ones and were covered with long black and white hairs.  I’m not sure why they liked this spot so much but after some research after the hike I found that these caterpillars would soon become Northern Giant Flag Moths (Dysschema howardi).  They are quite beautiful as moths!  They eat Brickellia, a native plant found near the slot canyon but it was interesting how the caterpillars were all where there were no plants.  Maybe to find a place to go into their cocoon?

There were so many nooks created by the water within the canyon and spots where only the girls could get into where large bounders had fallen into the slot wedging itself into the small space.

The girls were also excited to see stumps of an old ponderosa pine.  The logs were hollow and made perfect little climbing holes for the girls.  They called the logs their “tree skirts.”  I think Justin thought they were pretty fun too. 😉

The trail wouldn’t be complete without a couple bathroom issues from the girls.  Unfortunately and fortunately we gave our 4 year old a water bladder so that she would stay hydrated.  The good news was she stayed very hydrated.  The bad news was she had to go pee 5 times along the very narrow and populated trail.  On top of this our 6 year old had a stomach ache and needed to have an emergency bathroom break as well.  I think we did pretty good at picking a place where we had privacy and thank goodness we bring our poop kit on all our hikes!  On the way out the girls again had a fun time on the ponderosa pine tree.

The monument had Jr Ranger books which was great!  The only down side was that they handed me the beautiful patches and badges they were giving the girls (without making them finish the books or do a pledge).  I of course did lot let the girls know this.  After they had completed their books I held a mock ranger briefing complete with a Jr Ranger pledge.  My little one loved it while my older one wanted nothing to do with it if it didn’t involve a real ranger.  Eh!  There are only so many hats I can wear I guess.

That evening and the next morning before we took off for Albuquerque our girls played with some nice kids that were camping near us with a similar Sprinter van as ours.  They were a lovely family to chat with and our oldest really hit it off with the boy her age who was the oldest in his family.  The little boy and our oldest came up with a plan to sleep in their clothes so that first thing in the morning they could pop out the door and play again. It’s so nice to meet other families with kiddos on the road.  Kara had a good time watching them play as well from her perch by Wobbles’ window sitting like a little prairie dog.