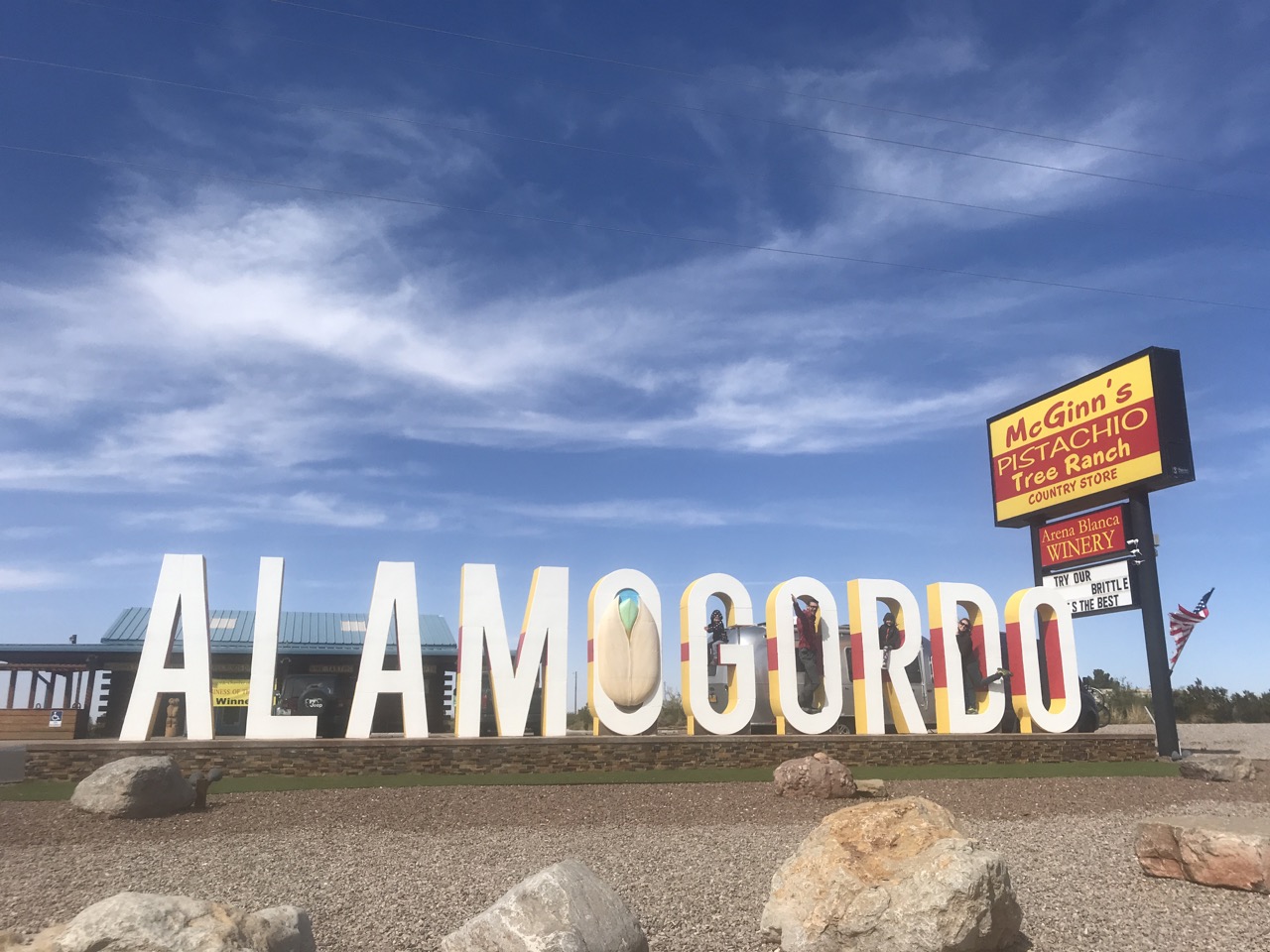 Alamogordo NM is the closest city to White Sands National Monument, so we made a few stops on our way out including to the excellent space museum there as well as to one of the pistachio farm stores.

The space museum was small but fun!  The elevators were super neat all decked out in space theme.  The outside resembled a door you might see on a spacecraft and inside resembled a control room with lots of screens, buttons and switches.  I don’t think they planned this but it worked out well that the elevator made a very loud swooshing noise as if you were being vacuumed to another location.

On our way to White Sands the day before we saw a sign that was warning road closures including the one leading into the park.  We looked up what this was all about and found that the road had been closed leading into the park just a half hour before we entered due to “missile testing.”  We didn’t know exactly what this meant until we read about it at the space museum.  The land near White Sands was once used to test the atomic bomb, is used for astronaut training and missile testing.  The pictures at the museum show these missiles not to be too small either!  Eek!  Missile testing is usually known a week in advance but sometimes park staff are only given 24 hours notice for closures.

We learned about the first monkey that traveled in space through a little video and got to see the actual container in which he traveled in.  Tight quarters for sure but the monkey’s 6 hour journey didn’t seem to phase him much.

It was also really neat to see a spacesuit close up and see all the fabric samples that they used to make various layers.

They also had a display that let viewers hear, feel vibrations of and see what different spacecrafts looked like when they launched.  Some were very different from one another and the kids were fascinated by this.

A strange part of the museum was that they dedicated an entire floor to Star Trek.  It was as if some local collector passed away leaving all his things to the museum including every chotchkey imaginable and also giant props used in the movie.  I’m not a Star Treker in the slightest but they had a chunk of fur that looked like it had been salvaged from a drier on high heat or maybe a dumpster, in a glass display box.  This apparently was a fur ball used as a prop in a show.

The kids favorite part was last in the dress up area.  There were space suits to fit all ages from 2 months up to adult size!  It was very organized and super fun!  There were space backpacks, boots, gloves and helmets to complete the ensemble.  Both us and the family we were temporarily traveling with took advantage and got some family photos.  What a cool spot.

Wobbles and Azul stayed cozy with a fighter jet in the parking lot while we were exploring.

We had seen gimmicky billboards around for a pistachio farm with “the largest pistachio in the world.”  We figured there was some cheeziness to it but I also had never been to a pistachio farm and thought it would be neat.  So, we had planned to stop at the one advertised on the billboards when we passed another with a neat sign.  We decided to stop there instead.  As it turned out, it was actually a sister store of the same place just 10 minutes apart from one another.  Why they did this I’m not sure but…we stopped!

It was dreadfully windy and cold so we all braced ourselves for a sign picture as Justin’s phone on the tripod took a beating.  He would hit the button for the timer and by the time he was back at the sign his phone fell over onto the rocks below.  We did end up getting a picture but only after Justin’s phone screen protector was smashed.  Thank goodness for the screen protector!

Inside we found a whole host of flavored pistachios.  Our favorites were garlic and dill pickle with second prize going to pumpkin spice.  They charged an arm and a leg for the nuts so we only got two small bags.  Unfortunately because we chose to go to the smaller of the two locations we didn’t actually learn anything about the pistachio groves.  We did get so see some pistachio trees but it was from afar.  Next time!

Off we went Roswell for Halloween.