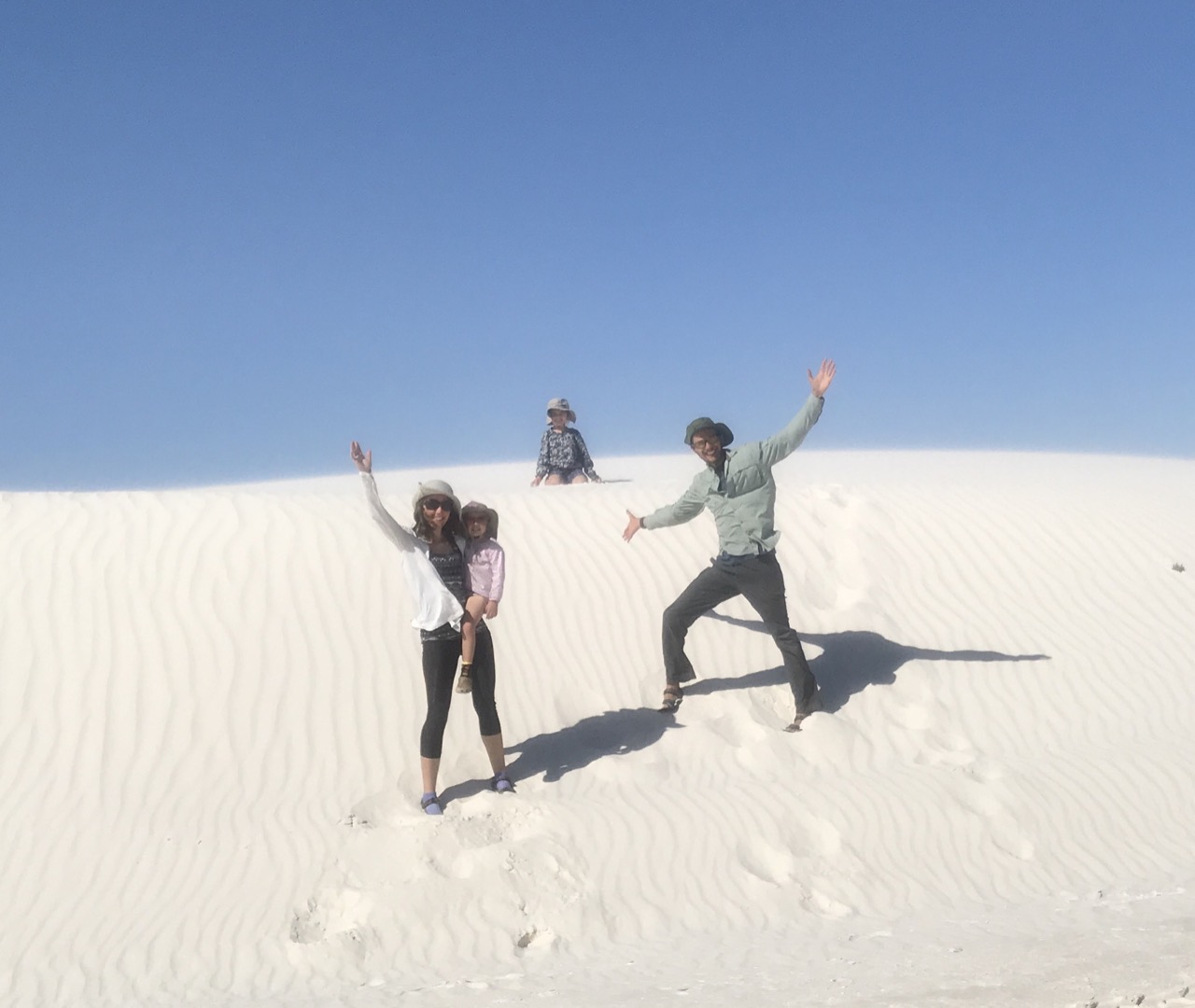 We left Santa Fe in a morning snow storm and headed south toward White Sands. We found that Azul and Wobbles had great traction on the snowy roads as we didn’t slip once.  White Sands is quite a bit lower in elevation than Santa Fe so we didn’t have to drive long for the snow to turn from sleet to rain to nothing at all.  By the time we reached Oliver Lee State Park outside White Sands it was in the 70’s and t-shirt weather!  What a swing in temperature!  We were on the same path as the sweet family we met so we decided to travel together for a bit.

As we got closer to the campground the air started getting really hazy.  We weren’t sure at first if it was from a fire or something else.  We couldn’t smell fire but couldn’t figure what else it could be.  When I checked the fire map of New Mexico it did show that one was still burning not far from there so we figured it was from that.  However, we later learned that the haze was actually gypsum!  It was hazy due to the gypsum blowing off of the white sand dunes!  Isn’t that crazy and scary?!  Man, how bad is that to breath we wondered?  I hadn’t shaken my month long cold or whatever it was and I definitely noticed my cough getting a lot worse by the time our time there was over.

When we arrived at the campground Justin was able to see the camp hosts catching a rattle snake as it thrashed and tried to strike as they held it with long pincher-like grabbers.  We were camped at the far end of the campground and they ended up throwing the snake in an area just beyond our site.  Eek!  A little farther next time please!!  They said this was the third one they caught that day!  We told the kids about the active rattlesnakes and made it a rule not to go into the shrubbery.  Not that they really would have wanted to anyway.  It was extremely dense around the campground with yuccas, prickly pears, creosote bushes and ocotillos.  It was outstandingly beautiful but not a very inviting kind of landscape.  This was the most densely vegetated landscape within the desert areas that we have seen set.

It must get the runoff water from the hills that neighbored it.  In the rest of the desert there are large spaces between plants where there is bare ground but here it was dense as if someone had landscaped it.  What beautiful sunsets and warm evenings we had here.  Such a treat!  We were even able to have a campfire with our new friends after the winds died down.

Seeing the white sand was incredible!  It was covering most of the road and had clearly been shoveled back along the sides of the roads so it looked identical to snow!  It was really a mind trick.  We were seeing “snow” yet were wearing summer clothes.  It was all confusing for my mind.  Just the morning before we had been in the same conditions except it really had been snow!

When gypsum is heated to 300*F it becomes a powdered Plaster of Paris.  This gypsum plaster quickly hardens when moisture is added and evaporates.  Where the ancient Archaic groups used to have fires there are now hearth mounds.  The heat from the fires cemented these hearths in place still containing charcoal and ash which are often surrounded by other artifacts as well.  Pretty neat, right?

These sand dunes were created a bit differently than the Great Sand Dunes.  Every monsoon season water flows from the gypsum rich mountains down to the valley to form a lake bed.  Gypsum is water soluble.  The water evaporates leaving behind gypsum crystals.  These crystals then are carried off by the wind rolling them until they are as fine as grains of sand.  Over time you get white gypsum sand dunes!

We ended up “renting” a sled (you technically buy the sled and then they buy it back for a portion of what you payed) plus a square of wax from the visitor’s center to use on the dunes.  They said that if you wax the saucer between runs it made it go faster.  I don’t know if it actually worked but we did it anyway.  We lucked out that the parking lot was right next to some small sand dune hills that the kids felt comfortable going down.  The dunes here seemed so tiny compared to the Great Sand Dunes that we had visited earlier on our trip.

Another difference we noticed between the dunes was the temperature of the sand.  The temperature of the air was actually hotter in White Sands than in the Great Sand Dunes, however, the sand itself wasn’t hot at all.  It was actually cool!  I think probably it had something to do with the color of the sand, after all Great Sands had a lot of black magnetic sand in it and also the White Sand Dunes have water about a foot underneath much of it.  The water underneath has got to act as a cooling agent.

The dunes were a lot of fun and the fact that the sleds didn’t go fast was just fine with all the kids as our youngest ended up deciding halfway through the sled play that she didn’t like how fast it went.

When I went down, I had to push myself for quite a bit of the hill.  Granted it was a little hill and I was heavy but it seemed like the sleds weren’t speedy little things.  It was still fun!  The kids also loved playing on grassy mounds of gypsum hardened by the roots of the bushes above retaining moisture.

We also found a number of things buried in the sand.  I can imagine there is a treasure trove of items under the sand as it hides things so fast with the wind!  Most of the things I found were trash but I also found a pair of fun heart glasses.  Score!

Just as we were leaving the dunes to eat some lunch at the van it started to get really windy again.  Sand and wind just don’t mix well.  Breathing in all that gypsum and without shade for a bit made us very thirsty and ready to move on.  We can only handle so much sand.  We’ll be cleaning up from it for weeks I’m sure but I’m glad we went.  It was such a neat place!  The girls completed their Jr Ranger pledge and we headed back to camp.

How not to deal with flies

There had been a bit of a fly issue at the camp (not as bad as the other run-ins with flies earlier in the trip but still they were quite prevalent) so we decided to use the fly trap Justin had bought earlier on the trip.  It consisted of a bag with “tea” at the bottom.  The directions had said to fill the bag halfway with water so the tea could steep.  Steep it did.  Steep and wreak that is!!  I had hung it in our van and started smelling a really rotten fish smell.

At first I thought it was our neighbors cooking up some fish.  However, the smell kept getting stronger and more potent like rotting flesh, trash AND rotten fish.  It was horrific!  I realized then that it was coming from that awful fly trap I had set!  Jeepers, if I was going to attract the flies with a nasty sent I would have just left our compost rotting in the sun for free.  I quickly moved the bag to outside the camper and was done with it for the day.

Well, when we got back from White Sands we found that the bag had dropped and was splattered all over the ground by the hitch.  The smell was horrific and the flies were loving it!  After throwing the bulk away in the trash, we dumped 5 buckets of water on it before the smell died down at all.  Yuck!  I would advise people never to get these traps.

On our travel day we decided to stop at two attractions close by.  While Justin was at the dump station (thank you sweet husband for being in charge of this), the girls created a pinata!  Months ago when we were talking about Halloween the girls were so excited to “go to Daddy’s work and hit the piñata.”  Well, Daddy doesn’t work there anymore so that was out of the question.  We talked about it and the girls realized it wasn’t necessarily Daddy’s work place that was sacred in their heart (though I’m sure that was part of it) it was mainly the pinata that they wanted to hit.  So, long ago I had promised them that for Halloween this year we would make one to bust open.  So, we did!  The girls made an octopus and gave it eyes “just to be funny.”  I then secretly stuffed it after a grocery store stop.