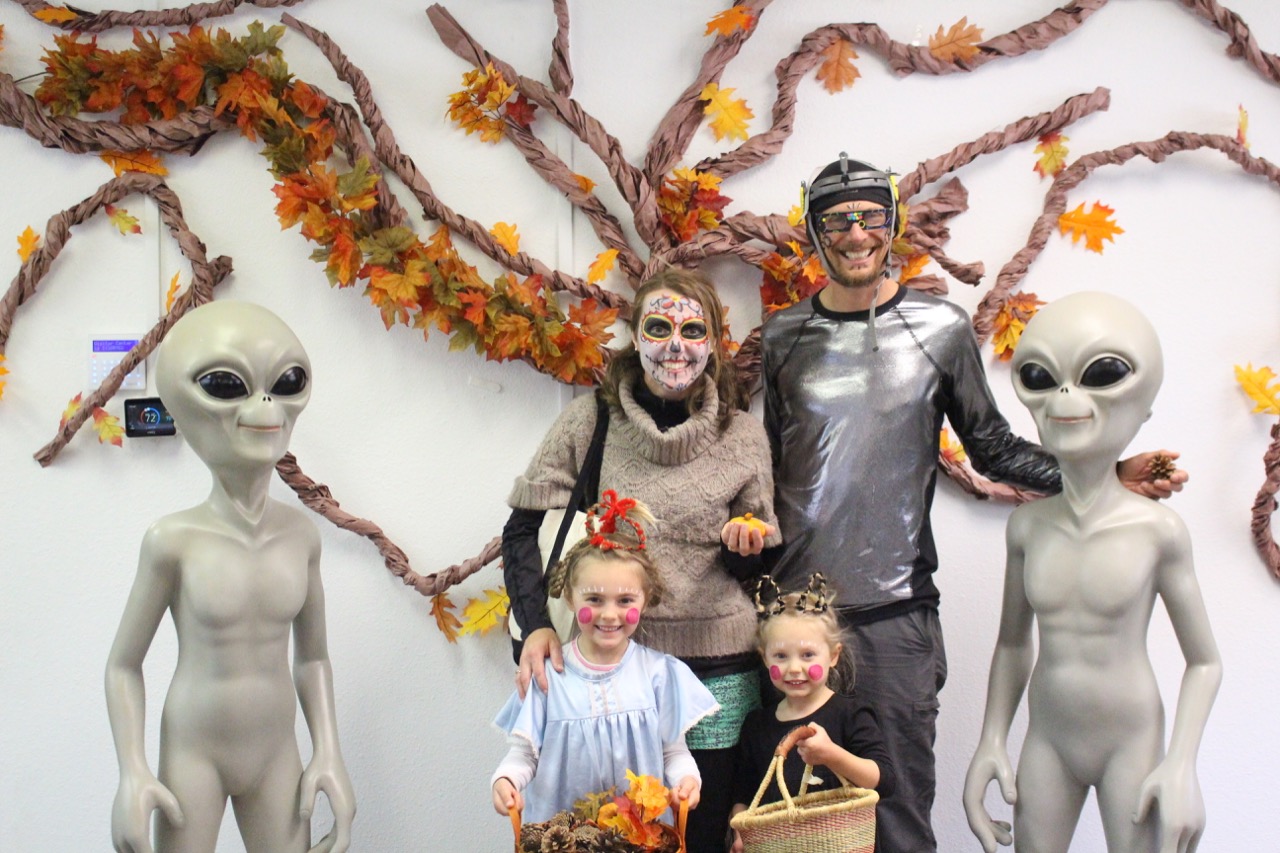 Upon arriving in Roswell we were bombarded by what you would expect, aliens!  The most popular by far was a wooden carved alien painted various colors, green being the most common.  The RV park we stayed at also had plastic alien statues in various poses and some with props.  And, lucky for the visitors, they were for sale.

The first night we arrived Justin really had a hankering to go out to dinner.  We had paid extra for an RV park in town so that we didn’t have to make the half hour commute to the other camping option we had the evening of Halloween when time would be tight as it was.  Because of this choice Justin rightfully wanted to take advantage of our time in town.

He had researched two restaurants that sounded good and both were about a half mile walk from the RV Park.  We were on the fence wether to bring the van or walk but we all decided we needed to get out and stretch our legs even if that did mean getting back to camp a little later than we wanted to.  So, we walked.

This walk was not scenic by any means.  It was basically down the side of a main car road littered with trash and various junk yards with no sidewalk.  Okay, well, not pretty but at least we were getting exercise and were going to get some good food in our bellies soon.

Well, things didn’t quite go as planned.  When we arrived at the restaurant, Cowboy Cafe, we realized it had closed at 2pm.  The backup option closed at 2pm as well.  Okay, not what?  It was freezing cold out so the girls and I decided to take shelter in the farm supply store across the street while Justin ran back to get the van to hopefully find another restaurant, quick!  It was my job to research other food options while Justin was gone.

Luckily the farm supply shop was lovely and the girls had fun looking at their greeting cards and figurines.  Unfortunately my phone didn’t work so I was left to the recommendations of a store worker.  She recommended a place called Margaritas which had Chinese food, American food and Mexican food.  Really?  This didn’t sound like a good idea but it was already way past dinner time and we had no other leads.

I tell you, our initial weariness was correct.  Margaritas was not good.  Ha!  It’s good to specialize in one type of food because then you can really work to perfect it.  Having your hand in three different food cultures is leaves no room to make any good.  Oh dear.  It was cheap.  It had that going for it.  Lesson learned.  At least the girls didn’t seem to notice.  They ordered a bean a cheese burrito, as always. To be fair, the Mexico food was a lot better than the Chinese food here.

On a side note, our poor little one’s feet are STILL not getting better!  We contacted her pediatrician and she thought it may be eczema.  So, we stopped our athlete’s foot treatment and switched to an eczema cream.  Her feet weren’t cracking anymore but a week into it she was complaining day and night of severe itching feet again.  Ahh!!!  This has been going on for so long!  We have now switched to a new anti-fungal wash, are treating her with anti fungal cream as we used previously and will also be trying other home remedies in the afternoons such as tea tree oil, Vicks Vaporub and hydrogen peroxide.  We all want to be done with this!  We’re contemplating finding a doctor on the road to do a skin scraping to confirm or rule out athletes foot so we’ll have a better direction for treatment.  To be continued…

Halloween day started off by doing hair and figuring out costumes for the day.  We had a trunk or treating event to go to in the evening but during the day was our time to explore the town.  Our oldest decided to be Cindy Lou from Dr. Seuss and our youngest was a black bat.

Once on Main Street, Justin took the girls into some of the endless tourist alien shops that all sell about the same thing while I put on some faceprint to look festive.

The idea was to wear black to go with my make-up but it was so cold I couldn’t bear to take off any layers.

We did find a couple different stores along the way including a pinata shop (the girls were extra excited to see other pinatas since they had just finished making theirs the day before) and a quilt shop (yay!).

Justin had researched a blacklight alien walk that sounded fun.  Upon arrival though we learned that it was closed down for maintenance. Really?  On Halloween?  So, we met up with the sweet family we had been temporarily traveling with to visit the UFO Museum in town.  It was really funny, over the top and a bit creepy.

This little town is hanging on anything alien like.  It was definitely strange to say the least.  Justin did find a picture of a UFO in McMinnville OR though.  This explains why they have the alien festival there each year.

The coolest part about the museum by far was that they gave the girls free pencils (with good erasers!!).  Like gold!

We found a good UFO mural on the outside of the museum for some family photos.

We ended up eating at Subway for lunch.  We had heard that the McDonalds in town had an awesome spaceship play area so we planned to buy the cheapest thing on their menu after lunch (small fries??) so that we could use their playground.  But, we found that it was closed due to renovations.  Timing was not working out with the attractions we had in mind.

Instead we decided to walk a bit farther down Main Street to the visitor’s center of the town.  On the way we found a cute little quilting shop!  It was nice to warm up and browse.  The ladies were so nice to chat with.

In the visitor’s center they took our picture with some aliens and told us about a free zoo not too far from where we were.  We still had 2-3 hours before our evening event so we walked back to Azul and went to the zoo.

We had planned on sharing our piñata with our friends but timing just didn’t work out with their kiddo’s nap time.  When we pulled into the zoo parking lot we saw what we were looking for, a tree!  We braved the cold while the girls whacked their sweet jellyfish piñata.

They had a blast and were psyched with their loot!!  Miso soup, dark chocolate, granola and granola bars! Woo!!  They went into Azul and had their granola right away.

We weren’t sure what to expect in a free zoo but it actually turned out to be awesome!!  There were a lot more animals than we thought and they were all loving having the girls around to feed them leaves from the trees.  The girls fed donkeys, miniature horses, goats, sheep, deer and a horned animal I can’t remember the name of.  It was a good time and time flew by.

Trunk or Treat at the Roswell Convention Center

We had to pry the kids from the zoo to get to the trunk of treat when it first opened.  We figured we wouldn’t stay long so we wanted to be sure to get there as soon as it opened.  We were surprised to see lots of parking but a bit of a line waiting for the doors to open.

Once inside we realized that the whole thing was hosted by a partnership between a church and the police force of the town.  They had officers, medics and lots of other emergency staff members with their emergency vehicles inside the convention center and handing out candy.  It was really quite impressive!

The girls were so good about saying “Happy Halloween” and “thank you!”  When I pointed out to the girls that the folks giving them candy are actually the people who respond if someone is in trouble and they help to protect us, our youngest went over to an officer who was giving her candy and said, “thank you for protecting us.”  It was so very sweet and I know she must have worked up a lot of courage for that since she usually is super shy to those she doesn’t know.  Sweet little hearts!

At one point our oldest said, “We have way too much candy.  Let’s get out of line and play the games!”  Agreed!  So, the girls had the bouncy houses to themselves for most of the rest of the time we were there.

On our way out we saw that the line of kids now wrapped into the parking lot and parking was full.  Those kids must have waited at least an hour to get in and once they were in I’m sure it was jam packed!!  Can you imagine waiting that long for CANDY??!!  Absurd!  So glad we got there early because we would have turned around for sure if the line was that long.  It was a fun event for sure though.

We said bye to our friends who we had spent a good chunk of time with throughout the last week and prepared for Carlsbad.  That evening the girls had a great time sorting their candy. They made piles of “Mama says ‘no'” and a “these are a little less bad for us.” They narrowed it down to about 7 pieces each with a “donation bag” to Justin and I when candy didn’t split equally and a large bag of discards to pass onto others we saw in our travels.