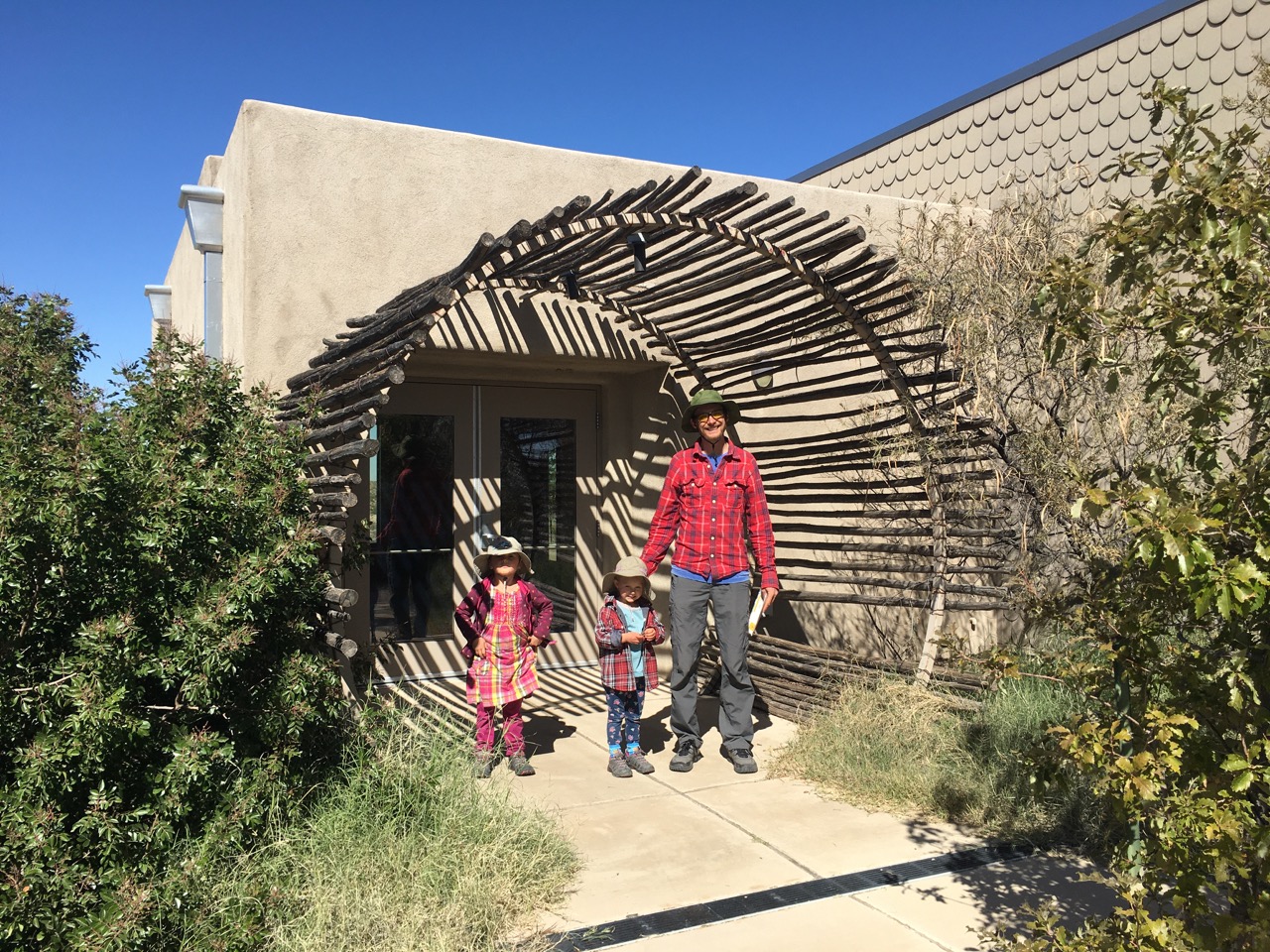 We started off our travel day to Carlsbad Caverns area by doing some much needed laundry in Roswell.  I tell you, there is a lot to be said for warm clean laundry.  Unfortunately my list of things to do in the morning was very lengthy and Justin’s was not therefore I had to give the laundry trust to him.  Justin is a very competent human being but for some reason the laundry gnomes like playing tricks on him.  Last time during this trip that I had Justin do laundry, one of FOUR pairs of the girls’ good wool socks disappeared.  I went over the protocol I use so that I am sure that no gnomes are playing tricks on me.  The result of this laundry trip with Justin in charge we gained one random sock!  Haha, I guess the gnomes felt sorry for getting him into such trouble with me last time so they tossed in an extra this time around. 😛

We stopped at a desert zoo/museum along the way and it turned out to be really lovely!  It reminded us a bit of the Arizona-Sonora Desert Museum.  Visitors (which I believe was just our family since we were there for hours and saw not another soul other than the workers at the visitor’s station) meandered around a path surrounded by beautiful native desert plants periodically happening upon animals here and there.

Most of the animal exhibits were done with such a natural touch to them it seemed as if we were just bumping into these desert animals within their natural environment in the wild.  It was very tastefully done and they also answered some of my plant identification questions with their various plaques by the plants.

There was this one bird habitat that you could walk right into their enclosure.  It was fun to watch the birds take baths in their little waterfall and to spot them hiding in the trees.  Not one of us even got pooped on believe it or not!

One of our favorites was the javelina enclosure.  The 3 javelinas were so curious to watch.

We were able to look closely at a lot of the native snakes in the area which was really helpful as far as identifying them in our heads.  It’s one thing to see a picture in our identification books and it’s another to see them in real life.  It was helpful that the most venomous and dangerous in the area looked the part to a tee!  However, there were a handful of other snakes that you needed to get immediate medical attention if bitten but that didn’t necessarily look that vicious.  In general, the ones with a flat head and also the ones with uplifted scales were venomous.  This was not true for all therefore our end conclusion was to steer clear of all snakes and treat their bite as if it was venomous.  Man, there are a lot of them in the desert!

Next we got to see some Bolson Tortoises.  Apparently they communicate using head bobs which, I have to say, looks pretty funny.  It looks almost exactly like those little wooden bobble head turtles you see in gift shops!  We even witnessed them “marrying” as our oldest called it!  Haha!

Last but not least we went through a VERY hot green house (warning us that in the summer greenhouse temperatures get to over 120*F!).  In there were the most wild and enchanting desert plants I have ever seen!  It was as if we had jumped into one of Dr Seuss’s books!  The flowers looked as if they were made of wax and the trees were only what one could dream up on paper!  It was so insanely hot we couldn’t stand it for more than a few moments with what we were wearing on our hike.  If we were in our bathing suits we could have stayed a bit longer.  Next time. ;). Cool place to check out for sure.

That night we camped on some BLM land 30 minutes outside Carlsbad Caverns which was a fine spot though dusty.

After the sun had set I looked again at the horizon and was shocked to see the sun still setting!  Had the sun not just set a half hour prior??  Was this some strange optical illusion or mirage of the desert??  Justin and I stared at it closer and realized it looked like a fire, flickering a bit.  This was too large and constant to be someone’s campfire.  Was there a wildfire close?!  Justin looked online to see what it was that we were seeing.  Turns out, it was one of the dozens of oil pumps nearby burning off the gasses produced when extracting oil.

They apparently do this so that the gas doesn’t build up and explode and so that it isn’t released into the air.  Boy, I tell you, it was eerie!!  We also noticed all the many other oil pumps and refineries with their flames blazing on the horizon.  The entire horizon was littered with fire from the oil.  Not a pleasant view I’ll tell you that.