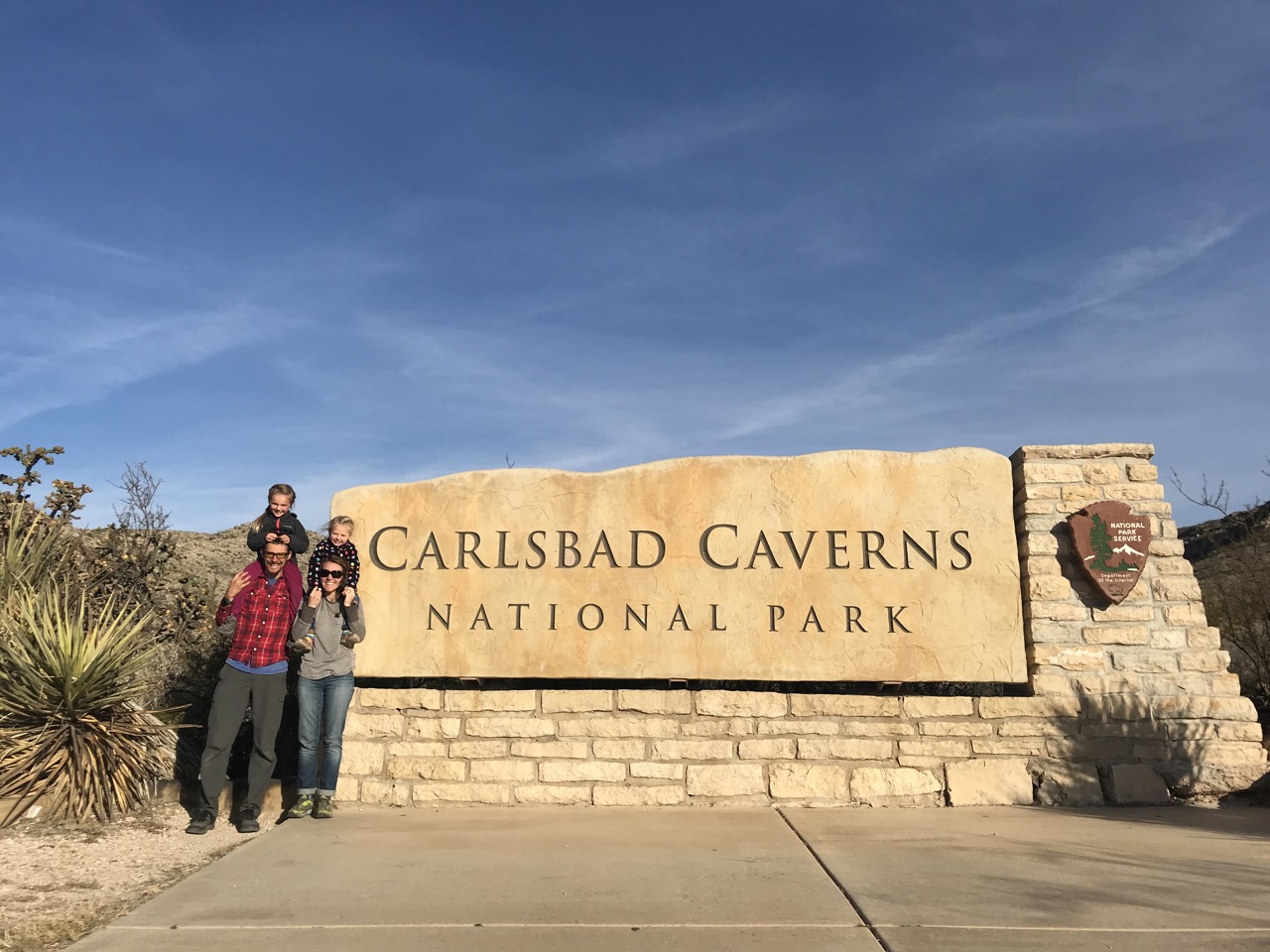 We woke in the morning to our oldest one whisper shouting to us to open our blinds.  “The sky is bright orange!” she kept saying.  She was right.  Sunrises and sunsets don’t get old in the desert.  They are almost always spectacular!

Off to the Caverns we went!  The gift shop, book shop and discovery area were so extensive we knew we would need more than one day to explore.

One hike per day basically fills up our entire day!  Before entering the cave we all ate some food and used the bathroom.  We didn’t figure there were any facilities nor food allowed in the cave.  However, we were wrong about this.  They actually have bathrooms and a mini food area and souvenir shop in the cave!!  It is located just at the base of the elevator that can take you down to the Big Room.

We chose to hike down the mile and a quarter natural entrance to the cave.  IT WAS SPECTACULAR!! We were entering into another world!  There is even an amphitheater at the very top of the cave entrance so that people can sit and watch at sundown the migratory bats coming out of the cave by the thousands!  Unfortunately we missed this by about a week.  They had all already left for Mexico before we got there.  Ah well.  Either we’ll meet up with them in Mexico or we’ll see them another year.

The natural entrance has dozens and dozens of steep switchbacks that lead you deeper and deeper into another world entirely.  So quickly we experienced what life looks like in a cave.  Geologists think that this cave formed from the inside out making the natural entrance to be one of the last or the last opening made.  Pretty neat, right?  The other structures within the cave had been forming for thousands of years prior.

The ranger told us that some cave formations have been cut in half to study and the stalagmites (the ones forming from the floor, up) had rings in them similar to what we find when cutting a slice of a tree.  However, the rings don’t count years as trees do.  They count…ice ages!!  Crazy!  The many, many formations within the cave are made up of calcite from ground water seepage.

The temperature in the cave is a pretty constant 56*F with about 90% humidity.  It was heavenly!!  Thank you moisture!  It was another world!  Almost immediately when we got into the cave we started seeing formations such as stalagmites, stalactites, popcorn, draperies and so many more.  So many of the features looked as if they belonged at the bottom of the ocean and were living creatures.

The cave was dimly lit with periodic warm tinted lights which emulated candlelight as this cave was first discovered under.  We also wore our headlamps to take a brighter look at some of the structures.  Pictures were tricky to say the least because of the darkness but luckily Justin brought his tripod so we got some.

My favorite structures were the draperies.  These giant chunks of calcite actually look like draperies due to the way the drips of water flowed at an angle and have a rippled effect.  Many of these were very thin, as if it were fabric and hung off the ceiling for yards and yards.  They were really beautiful!

On the self guided tour coming through the natural entrance we saw along the way the remnants of what earlier explorers had used to get around.  In one place there was the old wooden walkways that used to shuttle visitors around the depths of the cave.

In another place there was a very old wooden and wire ladder that went down into one of the lower caves.  This cave system is endless!  There has been 36 miles explored to this day though from the sounds of it there is more to explore.

In the 1898 James Larkin White (Jim White) became the first known person to explore the cave.  At the age of 16 years he explored the cave with his homemade lantern made of a coffee pot, kerosene and a wick.  All documentation on his explorations are told through another person as Jim was illiterate at the time of discovery.  He recalls one account where he descended down into the cave’s belly only to have his lantern go out.  He was alone in total darkness miles from the surface!  Can you imagine how frightening that would have been?!  He said he dumped more kerosene on himself than inside his cup but ended up getting his lantern lit once again to continue his exploring.  Brave kid! If you haven’t heard of his explorations in detail he’s worth looking up. Carlsbad Caverns was declared a National Monument in 1923 and a National Park in 1930.

I have wondered this for a while but just now looked it up.  What is the difference between a National Park and Monument?  Apparently the difference is rooted in the reason for preserving the land.  National Parks are protected for their scenic, inspirational, educational and recreational value whereas National Monuments have objects of historical, cultural and/or scientific interest.  There is obviously a lot of gray area here but, there you have it!  Congress designates national parks and in general presidential proclamations establish national monuments.

At one point in the cave’s history, Jim White used to sell bat guano to people as fertilizer for their gardens and orchards.  At the present time rangers tell us that in some parts of the cave where the bats roost, guano is 40+ ft deep!  That’s some serious pooping!  What we saw of the guano on our self guided tour was actually ancient guano from thousands of years ago when the bats roosted in those areas.

After descending down the many switchbacks from the top of the natural entrance to the cave belly we found that there was a snack bar, bathrooms and gift shop.

So very strange to see in the middle of a cave!  We were happy to use their bathrooms and have a space to eat our lunch as well.  Everything was dimly lit with lanterns on each table for you to turn on or off while eating.

The bathrooms were especially strange looking as they seemed to grow right out of the cave!  Our stall even had part of the cave as its ceiling.

The elevator shaft was sealed off from the outside world with rotating doors but the main entrance to the restaurant area was surprisingly not sectioned off to the rest of the cave.

Our plan had been to do the Big Room loop after eating lunch but instead we decided to come back the next day to give it proper time.  Once above ground again the girls finished their Jr Ranger books so that they could be sworn in and enter the Jr Ranger Station.  Our oldest wasn’t impressed but I thought it was a nice little space.  I’m pretty sure 6 years old is the age where kids start becoming teenagers.  Not a super exciting discovery. 😉

There we celebrated Day of the Dead.  We remembered our sweet friend and neighbor Rob who passed away recently by choosing some things we thought made him happy.  The girls added their creations they had made for him at the Day of the Dead celebration in Santa Fe that we went to previously on this trip.  It felt good.  I’d much rather skip Halloween and just celebrate Day of the Dead.

That night we had a fun family game night with the Pictionary game I made our littlest for her birthday.  We had so much fun!  We played, ate popcorn and partied to a disco ball.  We can thank Justin for the disco ball!  It was so sweet how our 6 year old helped our 4 year old out with some of the words if she couldn’t quite get it.

Day 2 at the Caverns

The next day we went down the elevator into the cave (definitely way more amazing through the natural entrance but still incredible once we were down there) and took the self guided tour around the Big Room.

They were spot on with the name!  This is the largest known natural limestone chambers in the Western Hemisphere.  The floor space is comparable to 14 football fields!  The loop trail is 1 1/4 miles long.

We also decided to pay for a ranger guided tour to King’s Palace.  Our little one just made the cut off since 4 years old is the youngest you can be on that tour.  Most of the tours require guests to be 12 years of age, and some have guests carry candles to get a sense of what Jim White may have experienced.

On our tour we were lucky enough to experience the cave with absolutely no light!  Ranger Jane seated us then turned off the lights for a couple of minutes with no sound but the dripping of the water through the cave ceiling.  It was so incredible!  It’s a type of darkness that I have never experienced anywhere but in a cave.  It’s darkness where you aren’t sure if your eyes are open or closed because it all looks the same, black!

Then, instead of turning the lights right back on, the ranger lit a flame just as Jim White did his exploring with.  I was shocked to find how little we could see from a single flame.  We could see shapes and details if the structures were within reach but we couldn’t see the ceiling or very far ahead of us.  It was said that Jim threw burning embers or rocks to estimate how deep an area was and used his voice to help determine how large the chambers were he was in.  I’m so glad the girls got to experience it!  The entire caverns were just incredible.  I feel so lucky that we were able to explore them as a family.