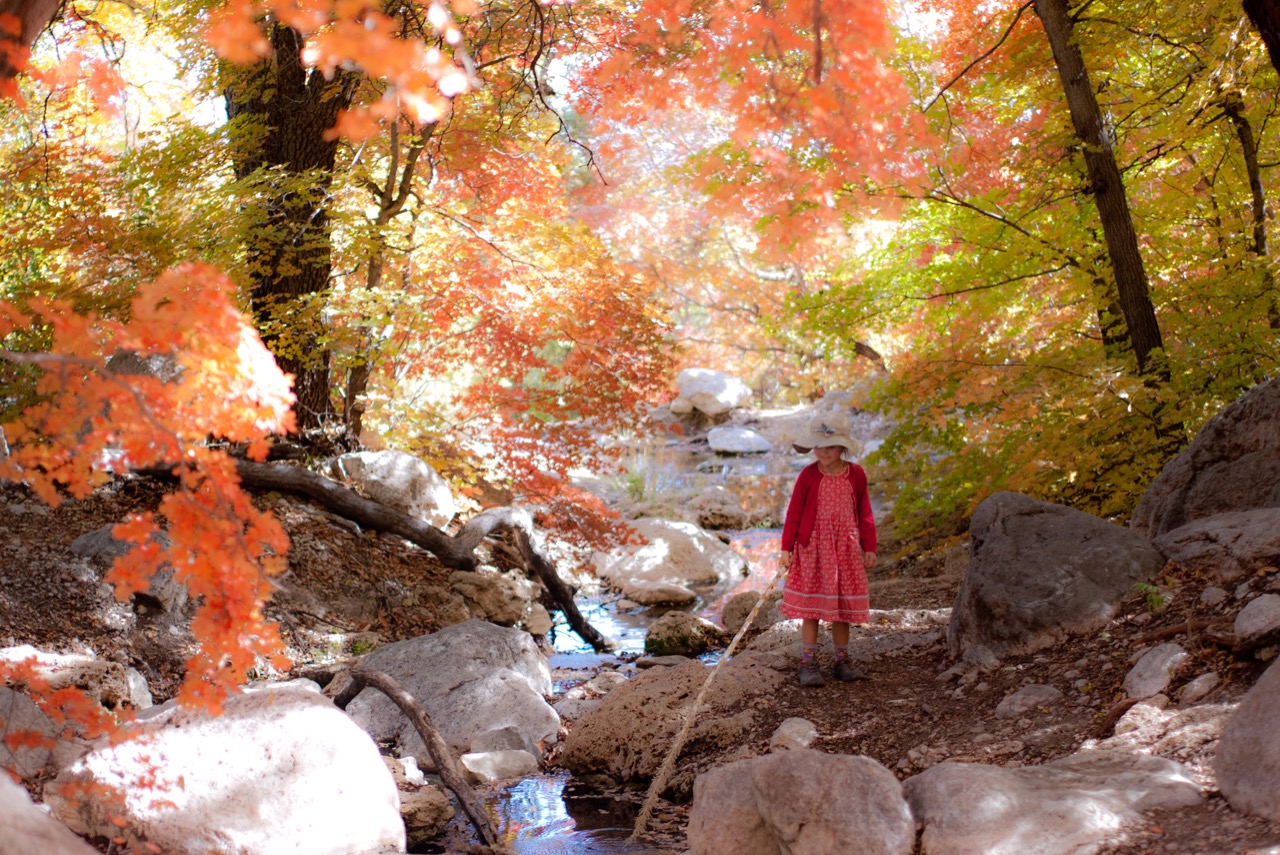 From our current camping spot in a free dirt lot we were able to travel a half hour with Azul to get to the Guadeloupe Mountains.  Not bad at all.  This was the girls’ and my first time in Texas!

We chose to do the 2.5 mile Smith Spring trail.  Justin had read there were real trees on this hike AND water!  Two things we have been missing so we were sold.  The girls, not so much.  You know those days that you are just grumpy for the sake of being grumpy and no matter how hard you try to snap out of it, you can’t?  Well, the girls were taking turns experiencing this on this day.  I guess the silver lining was that they were at least taking turns to give us some kind of a break.

The root of the grumpiness was actually partly my fault.  The time change and my cell phone tricked me!  Every time the time changes I think “who on earth came up with this terrible idea?!!”  I believe the sole purpose is to torture parents!  Here’s what happened:  Our 6 year old woke up to use the bathroom because she had a tummy ache.  I knew I felt really out of it but I checked my phone and saw that it was 5ish am.  My brain said, “time change makes that 6am” so I invited her into my bed to read her from my kindle.  We read for a very long time before everyone else woke.  I still didn’t think much of it because I was expecting wonky sleep due to time change.  It wasn’t until later that day that I realized my phone went bonker balls and decided not to change on its own.  Therefore it was actually 4am when I started reading to our daughter!!!  Oh my goodness!  So, there you have it.  Me relying on technology created trouble.

Anyway, back to the trail and many melt downs.  The trail first took us to the historic Frijole Ranch Site.  It was a small ranch started to be built in the 1870’s.  It even had it’s own little school house for the local 8 children.  This ranch and this school house building were basically the hub of their small community.  It was built on a natural spring allowing the Smith family to irrigate crops and raise a small amount of cattle.  The Frijole Spring produces 6 gallons per minute!  Pretty impressive in my book.

The trail then passed Nipple Peak, the biggest nipple Justin will ever encounter I’m sure.

Through the semi-barren, rocky and dusty desert terrain we went.  As we kept walking up, the fall colors of the trees in the distance became more vivid.  When you’re in the desert a while ANY color seems like it pops in the landscape.

These were big toothed maples with flaming oranges and reds!  That fall color makes me feel all warm inside like a nice relaxing warm cup of tea.  It reminds me of home in upstate NY and Vermont.

Along the way we found little spurts of maple tree color here and there.  The girls were excited too and took turns taking pictures of our family.

We finally got to Smith Spring.  How beautiful it was!!  It was as if someone had picked us up out of the desert and dropped us into a magical forest land.  It was scenery we had all been missing and it was just so beautiful with the fall colors.

The Guadalupe Mountains used to be reef under a great sea which is incredible to think about.  When looking at the rocks along the trail and riverbed they almost resembled coral.

Lots of limestone around for sure.  The spring was lined with the beautiful maples, Texas midrones (resembling manzanitas) and ponderosa pines.

We ended up staying at the river for over an our taking in the beauty, letting the girls play, eating our lunch and doing Jr Ranger books.

While the girls and I were doing this, Justin did laps back and forth on the trail while listening to podcasts.

During one of these trips Justin nearly stepped on a tarantula!  That lucky guy saw one last year on our trip as well.  The spider crossed the trail and headed up a hill.  Justin came and told us and we packed up right away in hopes of seeing it but we were too late.  It had already moved on or in its burrow.  Maybe next time.

We did however spot a shell attached to a desert plant.  I’m pretty sure it was a snail but have no idea how that thing survived or why it was in the desert!

By the time we got back to the visitors center it was late!  We only had a half hour until it closed and the girls still needed to do the Jr Ranger scavenger hunt to earn their badge.  It was a fun scavenger hunt but also a lot of writing for the girls which took some time for sure.  The girls ended up swearing in with 0 minutes to spare.

We forgot to get a sticker for our National Park collection on Wobbles, but they got sworn in in time so that was good.  It’s a pretty place for sure with the natural springs scattering the bottom of the mountains.