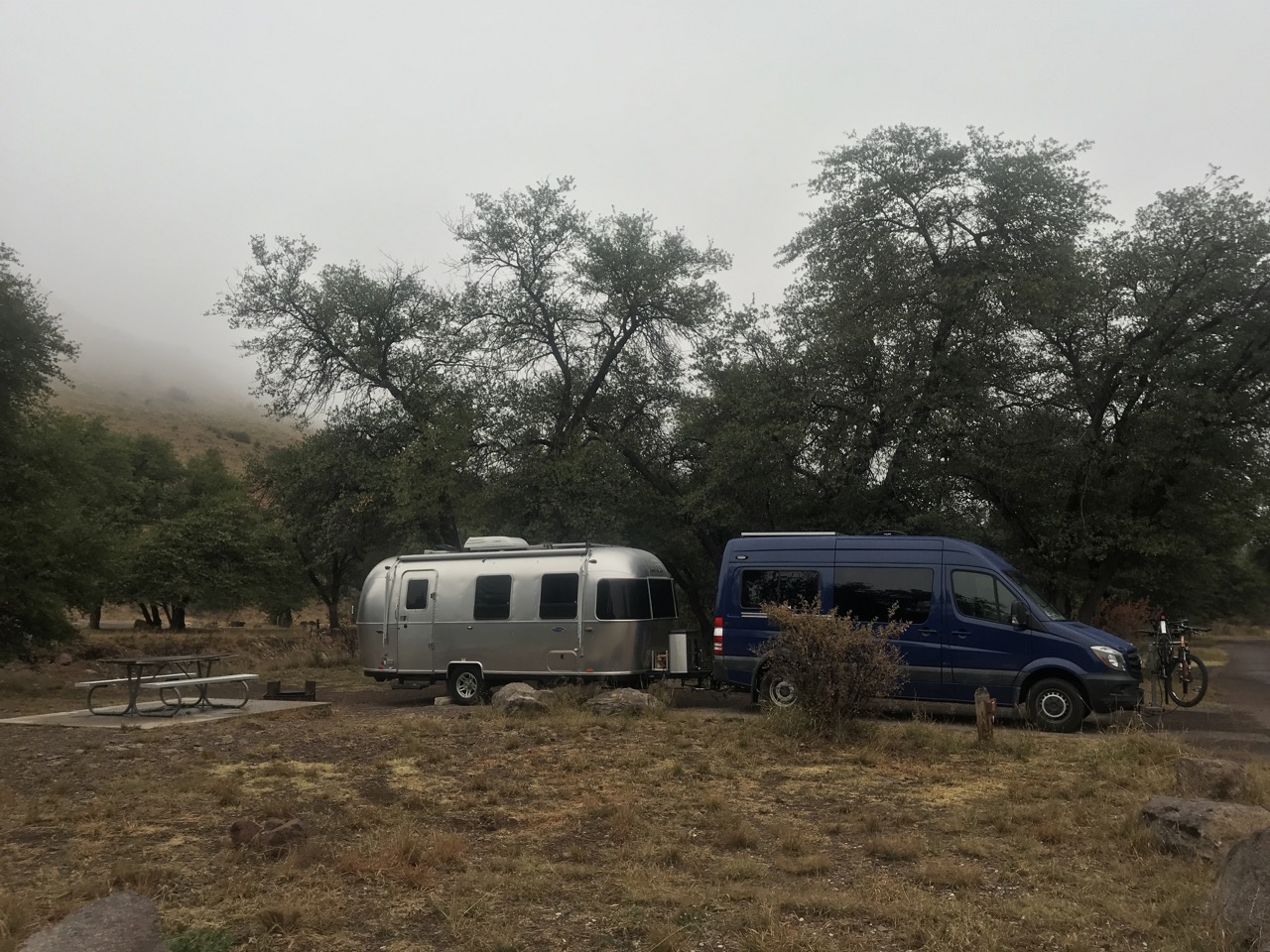 Our plan was to head from Carlsbad, NM to Big Bend National Park. However, doing the drive in one shot would be about 5 hours, so we wanted to find a stop in the middle to break the drive in half. That place ended up being Davis Mountains State Park, and it was a beautiful place to spend a few days.

On our way to Davis Mountain State Park we found a manual car wash.  The night before in New Mexico there had been a fierce storm that had left both of our vehicles splattered with mud.  The winds were so strong it kicked up all the dust around and with the combo of the rain it basically glued it all over Azul and Wobbles.  I was glad we were safe inside Wobbles when it hit, that’s for sure!!  It was scary even from inside as we rocked back and forth as the rain pummeled us with the lightning, thunder and howling wind as the background.  We JUST made it into the carwash without hitting the ceiling!  I’d say we had 3” clearance which made it tricky with bumps because Wobbles can easily bounce 3” when jiggled.  But, we made it and Justin cleaned both Azul and Wobbles spic and span.

After this we went to the only grocery store around and stocked up on veggies.  We were down to ZERO fresh fruits and veggies!  The grocery store was definitely very tiny and their selection very slim.  They didn’t have any organic produce but we sucked it up and bought some anyway since we were desperate.  Our shopping list was still mostly unfulfilled but regardless we were grateful for anything fresh!  We’ll have a better selection once we’re in El Paso after going to Big Bend N.P.

A Stop at McDonald Observatory

Just before getting to Davis Mountain State Park we saw that there was an observatory.  We weren’t getting a great cell signal so we figured we better stop and see what they offer since looking it up later might be impossible.  We found that they have star gazing “parties” a handful of times throughout the week.  We were excited to bring the girls to something like this but not only was the cost fairly high for what our girls would get out of it, being as young as they are, it was also very close to bedtime which means moods are totally unpredictable and the weather was looking as if it would be cancelled anyway.  Ah, well, when the girls are older.  It was a fun place to look around in regardless!

We got to this campground and were SO excited to see trees!!! Not just sweet stocky little Junipers and Pinyon Pines, full size trees!  The weather was amazing in the 70’s letting us wear t-shirt and shorts and the humidity was 50%!  It was so lovely!!  We grilled as many veggies as we could fit into our grill and devoured them outside on the picnic table.  Such a treat to be able to eat outside without it being too cold or too windy.

The dry river bed behind our campsite had some great rock forts someone had built.  The girls played dungeon in them for quite some time before they ventured back to camp.  That’s a game all young girls play, no??  Don’t worry, their dungeons are always fancied up and the prisoner is always treated with respect…most of the time, ha!

We were able to put up hammocks for the first time in a long time.  Hammocks make a camp spot so much cozier and fun!  The girls created a mini camp within our campsite with the hammocks creating a little fire pit, hanging up their linens and creating little beds and places to eat.  Playing house is just so fun!  How nice it is to made a space your own.

There were some hikes you could do right from the campground and a battle fort nearby but we were still pretty pooped from the fast pace of the weeks prior so we opted out of those things to give ourselves another down day.

That first evening we knew a big storm was coming in.  Before bed the girls, Justin and I watched the sky as lightning flickered in the distance.  Lightning is such a powerful thing to witness and it awed us all.  The girls and I took a short nighttime walk and discovered that there were hundreds of spiders in the grass this time of night.  They could have been there during the day for all we knew but we figured out they were there at night when we noticed something shining in the grass.  Upon closer inspection I saw that it was the spider’s eyes that were reflecting back at me with a sparkle.  When I shined my light close one went up on its hind legs opening and closing its mouth.  Eek!!  I later learned that they spiders were Wolf Spiders and are venomous. They are third on the arachnid list for best eye site.  They do not spin webs as most other spiders but have burrows in the ground and tend to come out at night to hunt.  I tell you what, this information did not make me feel warm and fuzzy inside.

Well, that night, as expected, it rained hard.  The lightening and thunder were very powerful and again I felt thankful to be safe, dry and somewhat warm inside Wobbles. The storm not only brought rain, it brought cold temperatures as well.  The following day the high was 45* which was a stark difference from the 70’s the day before.

The girls spent the chilly morning cocooning in the hammocks which we had thankfully brought in from the storm the night before.  They played until they were too chilly to play anymore then in they came to Wobbles to play dress-up.

They usually perform plays for us with different acts designated by the closing of the curtain, costume changes and new theme or location to their play.  It is a hoot to watch!  This time the girls were getting married, then giving birth in the next act.  How quickly this happened.  At least they got the order right. :P.

After the show I got some time in Azul to sew some Christmas gifts and odds and ends we needed for the camper.  Not only did I enjoy the sewing time, I also enjoyed turning on the heat for myself over there!  It is so much warmer than in Wobbles!  There is only one temperature setting over there, hot.  Yay!

The rest of the afternoon we took full advantage of all the lovely trees.  Justin set up a circus for us!!  We had a slack rope, hanging rings, the two hammocks and a hoist and repel system rigged up.  It was such a blast!!

The girls then got comfortable enough for Justin to hoist them up by themselves.  By the time we were done playing, the girls were being hoisted up (our oldest being able to do this part on her own; slowly but surely) and repel themselves down!

They gained a lot of confidence and had a blast doing it.  We all laughed so hard with the excitement, newness and giddiness of it all.  At times I was nervous for their safety but I knew they were in good hands with Justin.

When we finally got too icy to stand it any longer we went in and I prepared dinner while the girls played Candy Land and Justin took down the circus.

The girls ended the evening with a school fort in our youngest one’s bottom bunk.  The girls set up a little table with a light attached for our little one as she worked on her schooling with our oldest as the teacher and bunk organizer.  I sat nearby knitting with my heart melting as I heard their sweet little conversations and our oldest playing the harmonica ever so quietly for her sister “to help you relax and have fun while you’re doing schooling.”  So precious!

That was a great day full of exercise, fun, laughing and needed down time.  Ahh!  Such a nice feeling.