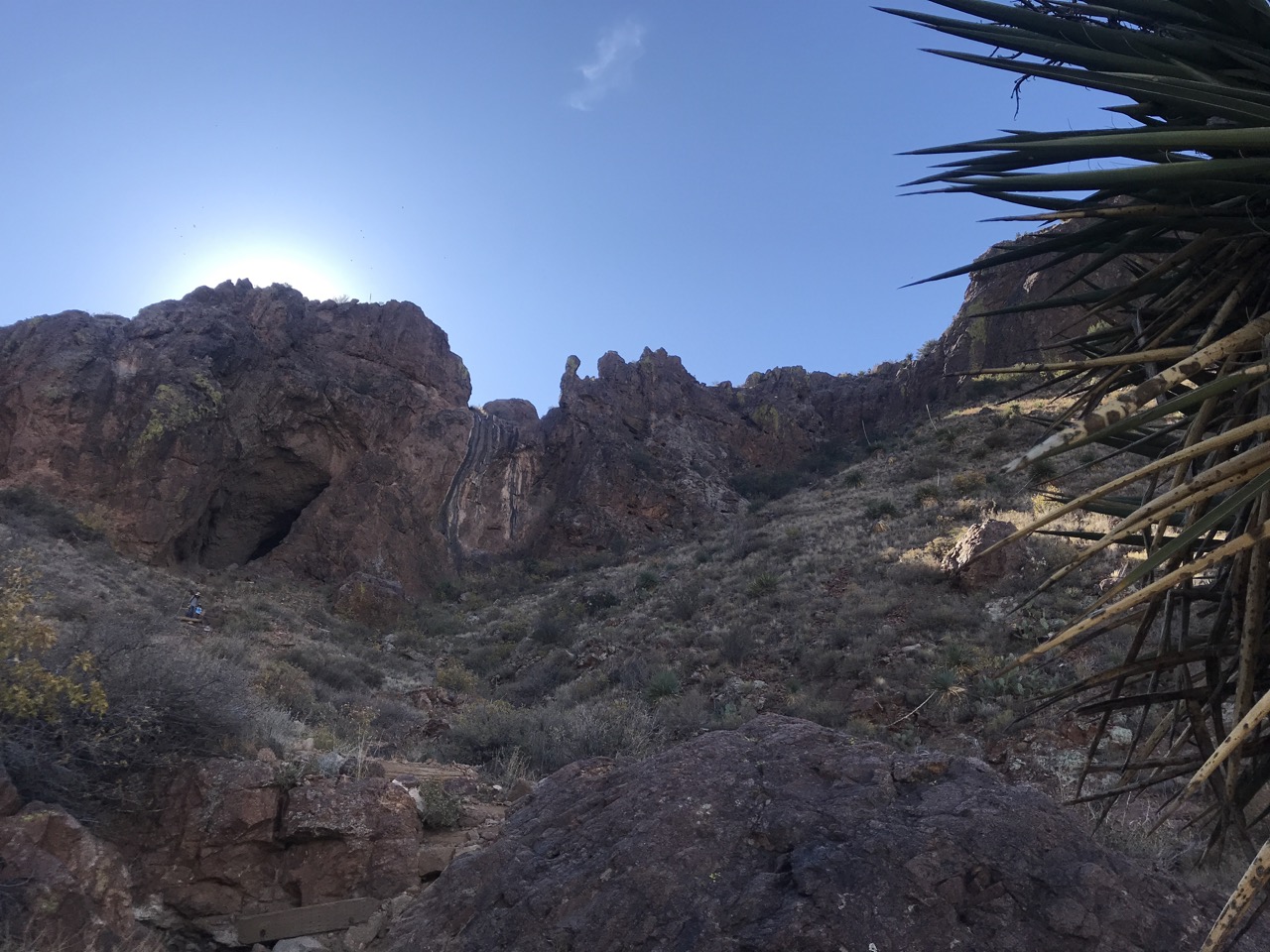 While we visited the El Paso, Texas area we camped at Franklin Mountains State Park.  It was conveniently located within a 20 minute drive to El Paso and offered some hiking trails and solidarity.

The park was for sure a strange place though especially for RV campers.  There were only 5 sites specifically for RV’s (with the rest really only suitable for tents or a van) but all were strangely not very RV friendly.  Some were tiny, and all were extremely un-level. We were told by some park workers in a pick up truck that the marked parking lot (with lines painted for the spaces) was actually an RV site.  Strange but good for us!  With a little leveling out we were good to go.

Another strange thing was that they closed the gates to the park at 5pm.  We were lucky enough to get the gate code from the workers in the pick up truck but it was purely accidental.  They were coming to empty the trash and they told Justin in passing.  The other person who was within the park when the gate got locked wasn’t so lucky.  Luckily for them they found us outside our camper and asked if we knew how to get out as they were locked in!  There was nobody at the entrance booth while we were staying there so information was given randomly as the pick-ups saw folks.  We were also surprised that we had almost the entire park to ourselves besides one other van far away from our site.

We enjoyed the solidarity.  For dinner we grilled as many veggies as would fit on the grill.

We bundled up to finish our dinner and watched a beautiful sunset.

The lights in the of El Paso were quite magical at night as they lit up the valley like fireflies.

The El Paso Zoo was a fun place.  They have a large playground in the shape of giant trees which various slides lead from.  We quickly found out, however, that once you get up to the tallest tree fort the only way down is by going down one of two very tall slides.  It is also not a super adult friendly tunnel up to the top.  This resulted in our 4 year old being stuck at the top crying for a bit while we coached her down.  She finally ended up agreeing to going on our 6 year old’s lap but was shaken up to say the least.

A little time in the bird sanctuary nearby and she was back to her regular self again.  There’s something to be said about just sitting and watching wildlife around you.

We saw some of the “last of the wild horses” though they didn’t seem very free range to me within their enclosure.  They had very stocky body types which was interesting to see.

We explored reptiles in a giant tortoise building and saw some very strange Hornbill birds that were startlingly loud!

After some errands during which time our oldest had a blast riding up and down the escalators dozens of times (its the little things) we landed back at Franklin Mountain State Park.

We took the Aztec Cave Trail which we could walk to right out campsite.  After 2 emergency bathroom backtracks we started our journey.  We hiked up, up and up some more on a loose rock path.  The many small rocks actually made the trail quite slippery especially for little ones, like walking on marbles.  It was worth it though!

It was such a neat cave with old fire markings on the ceilings and red clay on the lower walls.  Such history and such a great view!

We perched ourselves on the cliff wall ledge and ate popcorn that I had promised the girls I would pop and bring as a snack.  Good choice!

The way down our little one and I basically just clumsily glided down the steep rocky path with knees bent.

That afternoon we checked out of the state park and did our rounds picking up Amazon packages and doing a phone switcheroo.  Our plan after errands was to head for the Hueco Tanks– a place with unique rocks that is work famous for its bouldering (rock climbing).

Well, apparently it’s gotten a little too famous, as we found out that you really need to book a spot months in advance to even enter the park. Bummer, we’ll have to do this one another time!

Since we didn’t know where else to stay, we decided to just head out of Texas that afternoon and back to New Mexico.