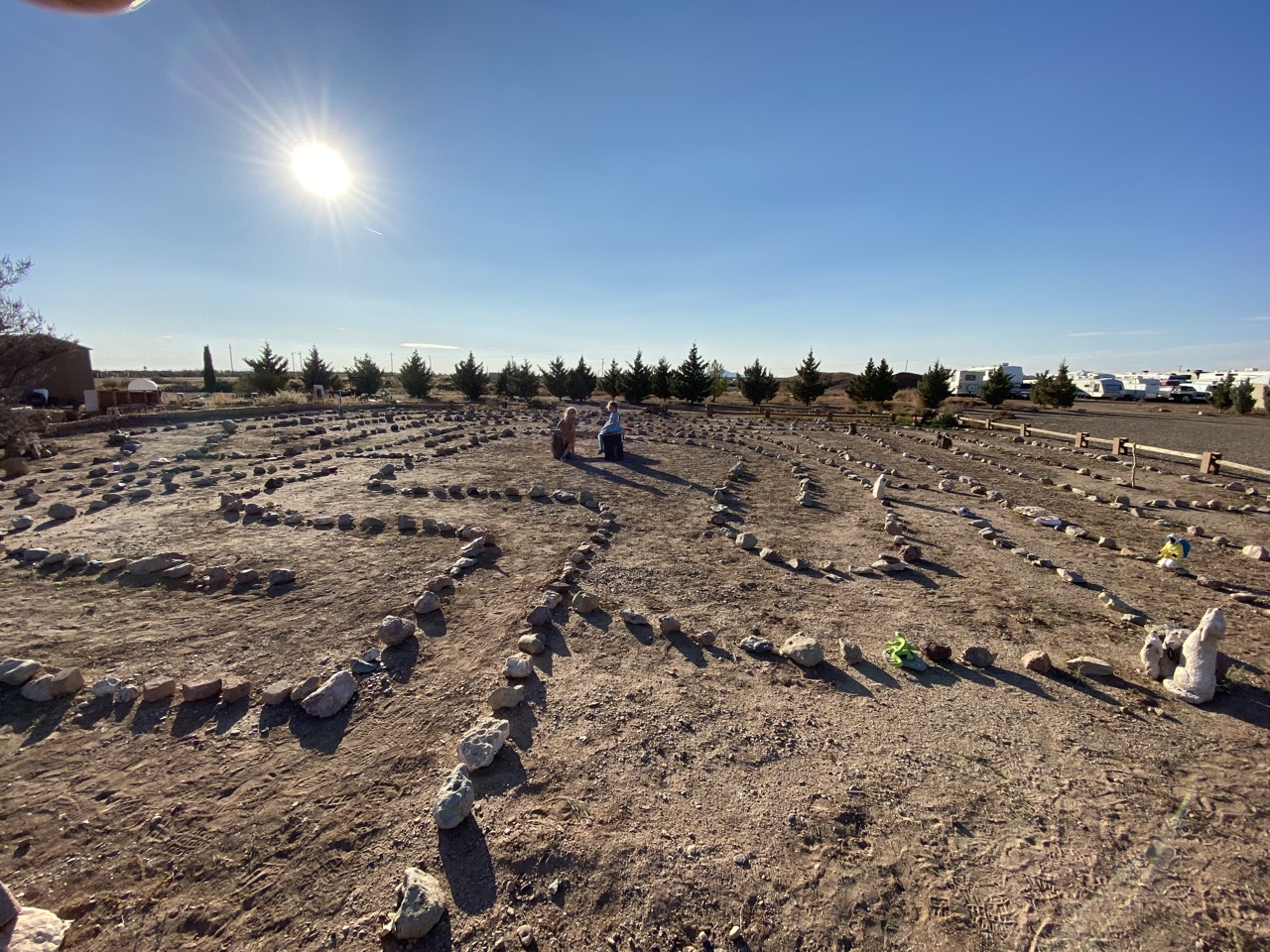 Though we did end up at the LoW Hi RV Park it was quite a journey to get there!  LoW, of LoW Hi RV park, stands for Loners on Wheels by the way.  Haha! Hilarious name.

Well, first of all our plan was to go to Hueco Tanks near El Paso, which is known for its rock climbing.  We had heard that they only let 70 people in per day some of those spots being able to be reserved.  We called to see what our odds would be like for the following 3 days.  When I called I was shacked to find out that 60 of those 70 spots were reservable and were booked solid except for one single spot 3 days out!  The lady on the phone said that there were 10 walk in slots available each day but that people staying within the park got priority on these.  This news translated to, Tanks plan was tanked.  We were really disappointed and also needed to come up with another plan asap as we were towing Wobbles and now found ourselves without a plan for camping that night.

We found that Rockhound State Park in New Mexico was not too far from where we were so decided to head there. On the way we stopped for dinner.

I am going to toot my own horn and say that I totally rocked this choice of restaurants (so tricky to get it right when on the road). We ate at La Posta de la Mesilla which was so incredibly amazing!!

The place was phenomenally decorated!  Since it was near the Christmas season the entire place was decorated in traditional Mexican style cheer with colors popping everywhere.

There was a statue of Santa, the manger scene (our little was so excited to find baby Jesus) and tree after tree filled top to bottom with colorful ornate treasures.

They also had exotic fish, fountains and parrots in their entranceway.  I tell you, it was absolutely magical!!  The girls and I were gitty with excitement all of us just oozing with happiness.  The food was of course lovely as well and served by a sweet waitress dressed in a beautiful Mexican style top and flowing skirt.  If you are ever in the area, I highly recommend this place!  What a treat!

After eating dinner out at the lovely La Posta we headed to Rockhound State Park.  It was now after dark and getting close to the girls bedtime but we weren’t too worried because we would be arriving at the state park just in time.

So, after dark we arrived at this state park to find that we were totally disoriented in the dark.  We rarely look for sites after dark and let me tell you, it is a lot more challenging than during the day.  There was no map of the campground and it was so tricky figuring out where sites were and which were occupied.  They didn’t have straight forward pull in or pull through sites.  It was all very disorienting.  Luckily when I went to investigate on foot with a flashlight a nice camper told us that when they had arrived early in the evening there was only one site left and he thought since then the last site had been filled.  It was helpful that at least we knew it was full.

With our second fail for the day we looked into other options in the area.  We had the option to go further into the unknown about 45 minutes more or to pay to stay at an RV park not far from the state park.  Due to previous misfortunes in finding spots late into the evening we full heartily decided to stay at the RV park close by.  This is how we found LoW Hi RV park in Deming!  They had a Boondockers option that allowed us to stay in an open lot with no hookups for $9!  They had laundry and showers that we could use for that fee as well.  Total deal!!

We found the next morning that we had parked pretty awkwardly in the middle of the open lot!  Haha!  Ah well, there was plenty of room to get around us.

This ended up being such a lovely place to stay!  The RV community was built around creating a space for older singles.  We were the youngest ones by far and all the sweet RV community members referred to our girls as “babies”, which we got a kick out of.  They have organized activities every day which we joined in on one evening.  They have a community camp fire once a week.  Justin and I enjoyed chatting with all the people there and the girls had fun playing with their small (and very well behaved) dogs and running around in the large labyrinth.

The labyrinth has stones as a border and dozens of odd and fun trinkets along the way.  When we left our little one painted a rock and wrote the word “Love” on it to leave in the labyrinth.

The RV park also had a hang out building where they had puzzles, books and games.  We got about halfway through a fun puzzle throughout our 2 days there.  The sweet members said the girls could bring it with them but we didn’t have space for it.

It was really nice to be able to have some down time within such a friendly community.  Our oldest packaged up little sewing kits she put together to sell at a Full Time Families event we will be attending close to Christmas and our little one finished making a zebra out of her sock that got a hole in it.  There is always a use for used items!

The down time gave me the opportunity to make corn tortillas for the first time.  I wanted to see if I could do it without a press as I’ve seen used.  It was so fun and they turned out great!  I ended up using my cutting boards and waxed fabric to press them and with a little help from some flour, it worked!

On our last night in Deming, before heading over to City of Rocks State Park, headed to D. H. Lescombes Winery. This winery is part of Harvest Hosts therefore we were able to do a wine tasting, use their beautiful outdoor seating area for our picnic spot and spend the night for free in their parking lot.  Pretty amazing! We had a lovely time enjoying their wine while we watched the girls play in the field and chatted with friends on Skype.

That night I woke up and was frozen to the core.  I got up confused as to why I was so cold to find that the heat was not working!  The day before Justin and I had contemplated going out of our way to get propane but decided against it figuring we would surely have enough for the night and we would get it on the road the next day.  So, when I found that the heat wasn’t working I figured we were out of gas.  I bundled the girls up with their wool blankets, tossed some additional jackets over them and slipped hats on them and myself.  I shivered back to bed figuring that first thing in the morning I would pop on the heat over in Azul and we would eat breakfast and get dressed over there.

Well, come to find out, we weren’t out of fuel.  Our heat was mysteriously not working.  We looked at where the Airstream dealers were since the furnace was still under warranty however a trip to 2 of the closest ones would mean 4-5 hours of driving one way.  Thank goodness we have Justin!!  He took apart our furnace compartment and milled around in there taking things on and off and testing things here and there.

So, handy Justin detached the circuit board and soldered it back on again!  Fixed!!  To many other people this would have been a problem they would have spent a lot of time and money on diagnosing and having fixed at a shop.  I feel very fortunate Justin is so sweet and handy and fixed it no problem while the girls and I snuggled in the heat in Azul.