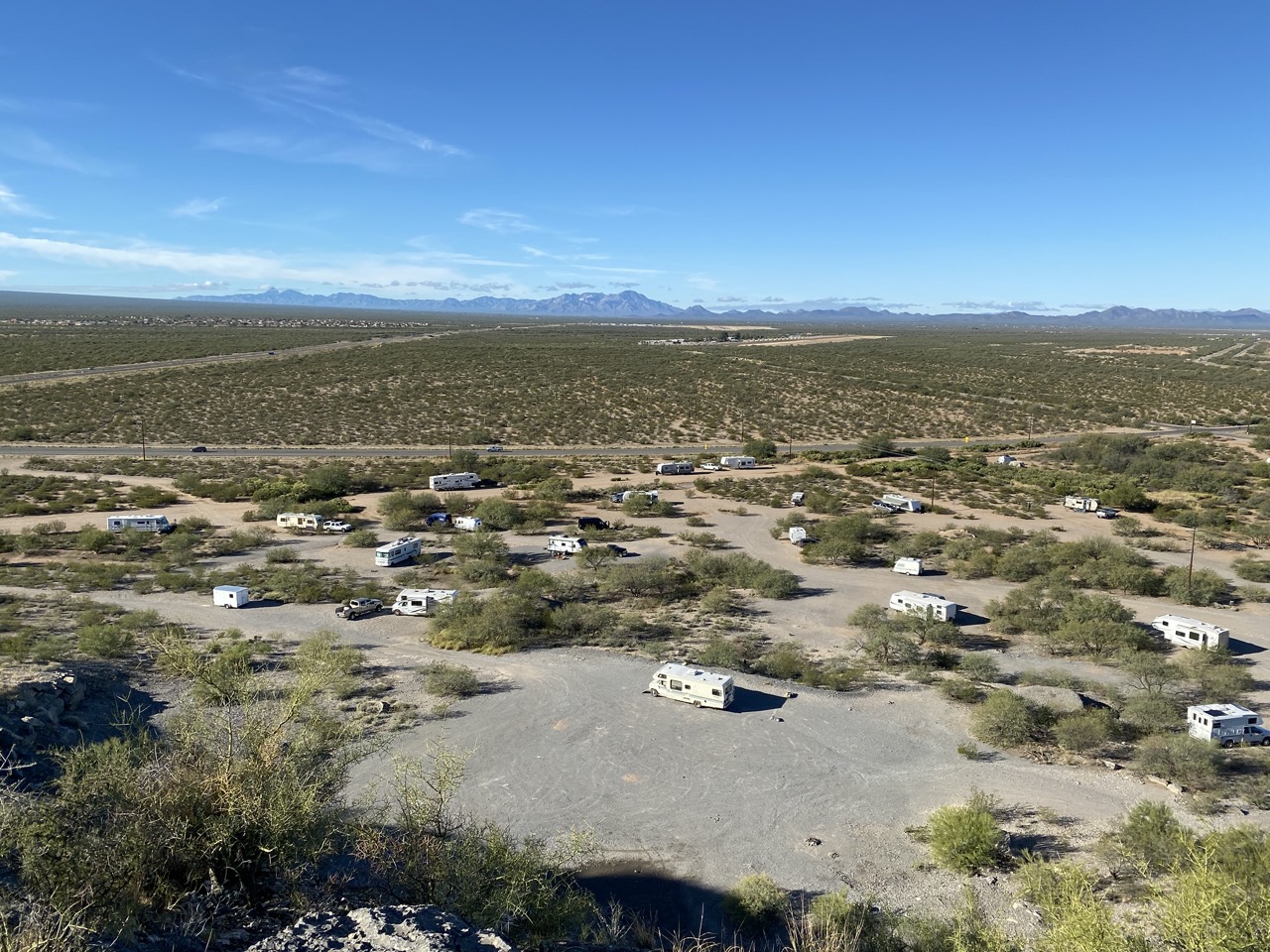 After having left Tucson to visit Bisbee and Tombstone, we returned once again to our trusty BLM spot at Snyder Hill– a favorite spot for our kids due to a great climbing tree.

Since Thanksgiving had officially passed we could start our Christmas cheer for real!  Our girls teamed up to haul the Christmas tree out to Azul and we decorated it that evening with ornaments we made from this year and last.  It took all of 5 minutes since it was so little but it was fun none-the-less.  Wobbles and Azul now both have a little bit of holiday cheer with a little bit of a Mexican flare.

Back home in Portland we do an advent calendar for the girls.  Since space is limited we left it home and have been doing Christmas Pockets instead.  I just made it up but I had the girls decorate a pot holder with beads and made them into hanging pockets.  We each hung them near each of our beds and throughout the day we slip a little special something into the pockets of others.  This is often a coupon for backscratching (or some other thing we can do for one another), a little drawing, a kind note, a found treasure or whatever might put a smile on that person’s face.  Then, after dinner we open them up one by one.  It’s just another way we can all show each other kindness and it makes it a fun surprise.

In celebration of the cheer I made tamales for the first time.  We made do with what we had as far as a steamer.  I shoved mesquite branches into the solar oven, filled the bottom with water then balanced the stacks of tamales on the top.  It worked beautifully and they turned out great!  They were fairly time consuming to make since I had to cook all the inner veggies separately but if you already had cooked veggie leftovers from grilling or a stir fry it would be easy peasy.  I’ll definitely be making these again!

I also made yucca root balls that the girls just gobbled up!

I just figured by making a lot of different Mexican food before we got to Mexico I would have a better appreciation for their food and it would give me a sense of fair cost of the food.  Plus, it’s fun to experiment and get some new recipes under my belt!

Justin’s Mom wasn’t far from Tucson at the time so she met us at the miniature museum she had told us about.  It’s a museum of doll houses that are elaborately decorated.  It was a really neat place!

Well, the girls and I thought so anyway.  Justin was not impressed in the slightest. He thought it looked like a hoarder house.  There was a tid bit of truth to this observation.  Some of the displays looked like the decorator just couldn’t stop themselves.  There was one that was a Halloween theme and there wasn’t an inch of the display that wasn’t covered in random Halloween themed figurines. I personally didn’t care for those displays either.  But, many were beautiful miniature depictions of homes or scenes.

It just brought me back to being a kid and playing with my doll house and having so much fun.  Everything is just so tiny and lifelike.  You could take a close up picture of some of the scenes and fool someone into thinking it was a real home somewhere.  My favorite were the displays where everything was created from scratch including the figurines.

The place was magical.  They had a huge tree in the middle of one room that housed different mouse scenes within the knots and burrows within the tree.  These were my favorite!!

There was also a little fairy, depicted through light, that flew around the museum and sometimes fluttered down the side of the this tree and appeared in one of the knots in the tree.  The girls were just mystified and dazzled by this little fairy.

The fairy even had a mailbox where kids can send her letters.  Pretty cute!  The girls each wrote one and the fairy’s note at her mailbox said she tried to write back to all the kids that left her mail.  How magical!

Many of the displays were Christmas themed which made everything look that much more magical with all the snow, warmth and joy within the displays.

The museum had a glass floor in one of the rooms that had an entire winter village beneath it.  The girls spent a long time fluttering in circles on top of this telling me, “I feel like I’m flying.”  It made my heart smile.

In our prep for Mexico Justin put in a permanent water filter below our kitchen sink to replace the Berkey we used to use.  The negative to the new one is that in the long run it will cost more and create more waste due to the filter replacements (the Berkey’s filters are just sanded down when it needs to be “replaced” so they last a lot longer).  The thing about the Berkey was that it took up so much of our precious counter space and having water ready to drink when we arrived at a camping spot as well as trying to find a place for the filtered water left when we were leaving a place was almost a constant annoyance.  Securing it when we traveled as well as drying it out every time we moved was a pain.

So far so good with the new water filter.  Besides two blips from Justin and me it has been great!  While Justin was installing it he accidentally dropped a key part down the back of the outer wall.

Who knows where that went but we knew we weren’t getting it back.  Luckily the part could be purchased semi-easily at a Home Depot.  It just meant we were without a kitchen sink for a day.

The other blip happened when I was filling up our tea kettle from the water filter faucet.  The great thing and the dangerous thing about this water filter is that it is silent.  So, when our little one needed my assistance in the bathroom and I left the kettle filling I wasn’t able to hear the kettle filling up with water.  That is until it was running off the counter like a waterfall off the counter toward my bed!  I luckily heard it just in time to turn off the water, throw a towel on the waterfall and rip all our books out of their home.  Our books live on the wall by my bed that had just acquired the waterfall.  It is a total miracle that all our books weren’t ruined!  ONE book had a splash of water on the corner of its cover which wiped off just fine.  None of the other books were touched!  So lucky!

Our Tucson Tree “The Gym”

Once again we were camping next to the famous Tucson tree.  This tree has sprouted so much joy in the girls it holds a special place in their hearts and all our memories.  Once again the girls turned this tree into a magical palace that let them dream and create!

We also enjoyed the downtime this campsite allows us to have.  The girls and I enjoyed a lovely afternoon of painting together.  That was the special treat we all left each other that day in our Christmas Pockets.  We also hiked up to the top of the nearby hill to get a view of the surrounding area.  You don’t have to get up far in the desert to see a long way.   We had a meltdown on the way up and the way down by each of our girls, but at least they were taking turns.  Never a dull moment!

After the hike the girls then dressed all up to become “greeters” of the BLM land we were camping on.  As greeters they wave to the newcomers and greet them with a smile.  The girls set up the Christmas tree and some of their play linens to make their greeters station fancy.  Such cuteness!  The people they greeted were all smiles.