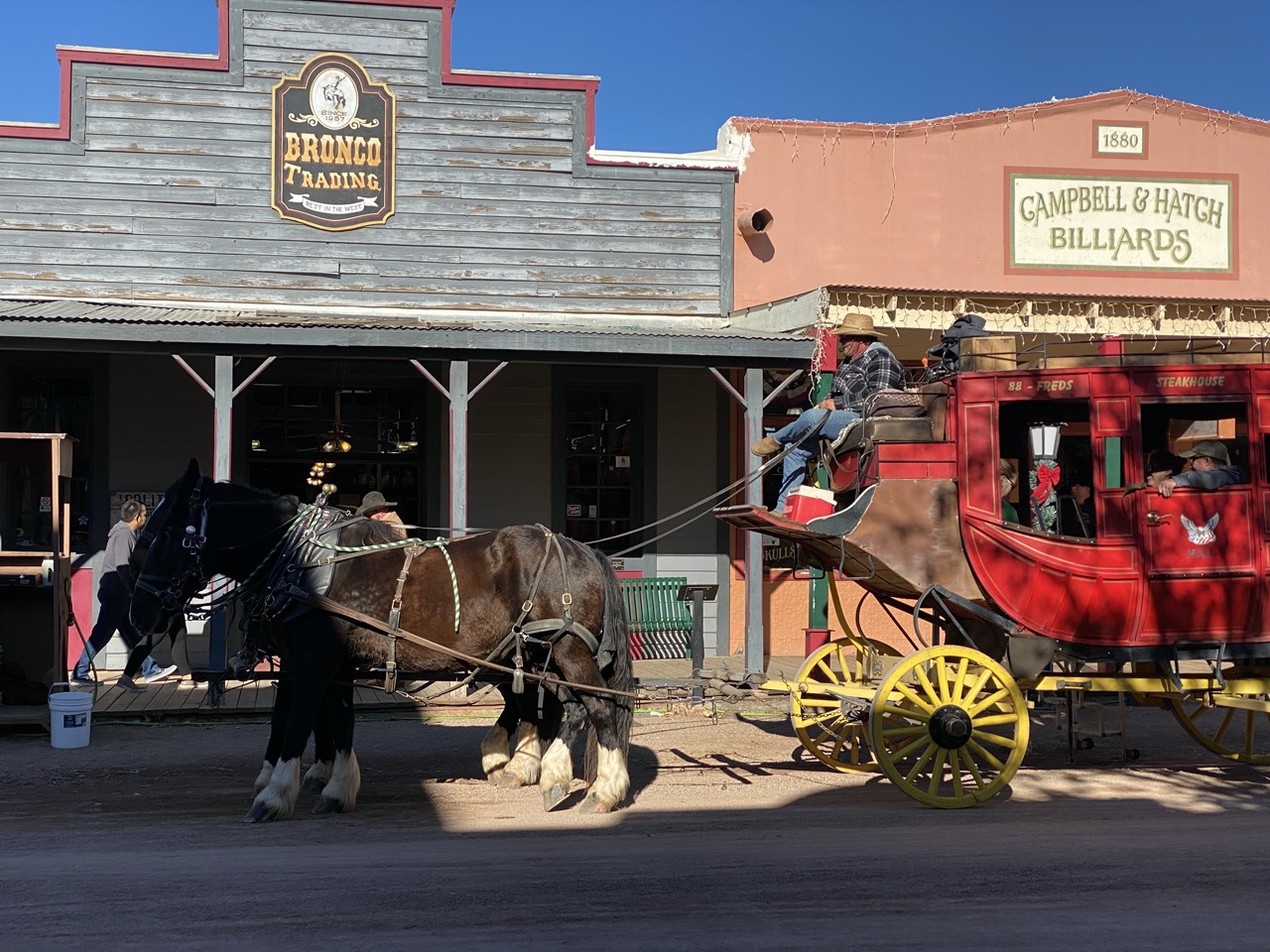 Justin and I had previously visited Tombstone before we were married or even engaged actually and we had such fond memories of it!  Well, we realized that those fond memories were in part because we didn’t have kids.  😛  Tombstone is definitely better to visit as an older kid or for adults. Still, we managed to recover ourselves and have a pretty good time by the second day.

Tombstone with Kids, take one…

Tombstone is full of cute little shops, historic buildings, actresses and actors in costume mimicking what life was like back in the western days and full of live music, restaurants and other entertainment.  Since our girls get bored with browsing shops and were scared of the gun fights (this is a good thing) we stuck to the streets.

We saw some really neat things and the potential was there to have fun.  However, the girls hadn’t been sleeping well therefore both were little monsters and our oldest was determined not to have fun.

We thought about trying to get our money back for the following night stay at the Wells Fargo Campground we stayed at but decided to give it another try the following day.

Justin and I came up with a plan and started off the day with pancakes!  Who can have a bad day when they start off with pancakes and uncle Derek’s syrup (thanks Derek!!)?

We were on our way to get a calendar from the Family Dollar and to check out Boothill Graveyard when we stumbled across a thrift store called Vintage Cowgirls.  It was such a fun store to look at as it sold all sorts of clothes, kitchen items and such of the time period of the original Tombstone town!  There was also an oversized Adirondack chair that the girls just adored climbing on and taking turns putting on performances.  It was such a neat spot we decided to eat our lunch there!  It was delivered to us by cowboy Justin.

Our little one and I checked out Boothill Graveyard for a small fee of $3 for adults and kids were free.  The bodies were buried close to one another with large stones marking their plot.  It made me wonder how far below the surface the bodies were!  The headstones were made of wood and had some kind of a description of the body buried beneath.  Many of the headstones read “Unknown” and in the pamphlet they gave us it went on to say where the body was found or what the person was dressed in when it was found.  Some headstones said something like, “two Chinese men” or “Kansas kid; cowboy killed in stampede.”  Many were lynched, hanged, murdered or died of various diseases.  Tough times, for sure!

We took a ride on a stagecoach pulled by two beautiful horses.  I had warned the girls of horse toots but we were inside so sadly for them, they didn’t get to experience it.  A bit pricey, but fun!

Next up, Big Nose Kates!  This is a place we attempted to go into the previous day but our oldest complained that the music was too loud so we ended up leaving.  On our second try things went over well!  It helped that the singer was on break when we arrived so it seemed more tame.  We all enjoyed a Bloody Mary drink, obviously some virgin and did a food dance as we ate pretzels and jammed to Raleigh Jay behind us on stage as he kept attempting to break our little one’s shyness with a fist bump every 10 minutes.  It took her a while but she started off with a high five then finally gave in to a fist pump after about 45 minutes.  Jay was persistent I have to say.  He was great and I wondered if he was the same musician we saw when Justin and I visited years ago, as he looked familiar.

Justin found that they had really neat urinals there too!

Off we went to the Mexican Restaurant down the street called Cafe Margarita.  We ended getting the patio to ourselves, keeping warm by their fires.

We were excited to try our our Spanish again but sadly our waitress had not a clue what we were saying as she didn’t speak Spanish.  She was a good sport as we told her we were going to first speak in Spanish for practice then translate to English.  Sadly the margaritas were really bad.  Super, super sweet!!  We’re hoping for better luck in Mexico. 😛  We had fun regardless.  Second day is a charm apparently!