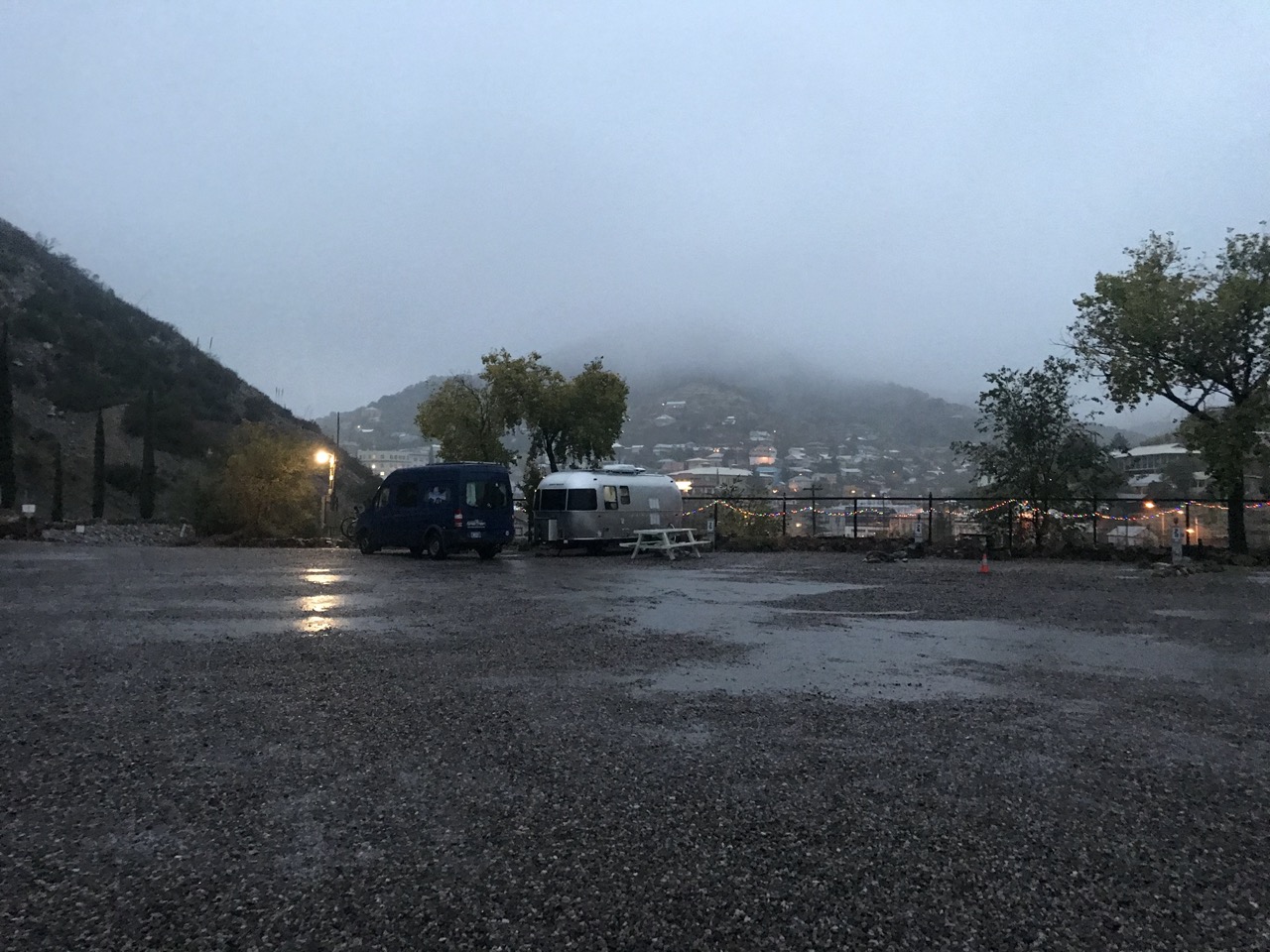 The weather forecast for while we were in Bisbee for the Thanksgiving holiday was bleak and it stuck to its planned course.  It was cold, rainy and windy most of the time.  Despite the weather we could see that this was a really cute town!

The town of Bisbee is built on a hillside near and on old copper mines.  It is NOT build for rain.  The first day we arrived it rained hard all day long creating a mini-lake in the campground we were staying at.  The campground was in a great location just next to Queen Copper Mine which has tours and a cozy little gift shop.  I did laundry while the girls watched a movie.

As a recent thrift store find the girls picked out a ballet workout video.  I popped it on in the evening thinking the girls would love dancing around.  This hopefully is just because it was the first time they were watching it but, I was the only one doing ballet!  Haha.  Well, I had fun anyway and it was entertaining for the girls.  Next time!

As a Thanksgiving gift to the girls (but really to me) I made the girls hygiene bags which contained everything they would need to clean themselves and pamper themselves a little (lotion, chapstick, etc)!  Bathing and grooming is so much harder while on the road and recently our oldest in particular has been giving me a really hard time at any mention of getting clean in any way.  Now they can have a touch of independence and be practicing good hygiene at the same time with no whining.  So far so good.

The girls waved to the people in the Macy’s Thanksgiving Day Parade on TV then got showered in the campground bathroom (don’t do it if you stay there!!  No pressure and it’s cold.) and got fancy to walk into town.

Thankfully the rain let up just as we were walking into town.  We met up with Justin’s Mom and took part in the St John’s Episcopal Church Thanksgiving dinner.  It was free for all with donations and side dishes welcomed and so lovely!  The food was delicious and chatting with folks was nice.  We ended up inviting a gentleman from our campground to join us as he was away from his family and traveling alone.  The meal and company was enjoyed by all.

We explored the town a little and learned that the alleyways are the roads in the town.  Due to all the rain there was an entire alleyway that had turned into a very fast moving and fairly deep river which emptied into an underground inactive mine!  Isn’t that nutty?!  I guess that’s one way to reuse a mine.

Since most businesses were closed for the holiday we went to a local playground.  The girls had a lot of fun on the various climbing structures and the rain mostly held off.

We soon learned a little surprise about this playground.  It was built on quicksand!!  At first we noticed a couple spots were a little mushy but didn’t think too much about it since it had been raining quite a bit.  However, soon our little one got her foot stuck deep in the quicksand and couldn’t get out.  Justin’s Mom was near her and went to help her out when she herself got sucked in past her ankles!  The whole thing was so weird and unbelievable.  Luckily Justin’s Mom was staying at a place just across the street so she was able to get some new shoes and socks on.  As for our little one, we unfortunately had no extra socks with us!  I put her in dry panties and pants and gave her my socks to wear.  Thankfully I had fabric scraps in Azul so I wrapped those around my feet like socks.  The whole thing was just so bizarre but we all had fun.

We started our Christmas Cheer by hanging up lights, making puff ball decorations Mexican style and reading The Nutcracker.

We found that we need to get some little hooks for our lights but we had a bast starting to decorate anyway.  We read the Nutcracker before bed and out oldest little elf even fell asleep with her Santa hat on which was just precious!

The next day we tried to get out and explore a bit but the weather had other plans for us.  We first darted down the hill in the rain from our campsite to the Queen Mine building.  The old building was cozy with a fire lit to keep visitor’s toasty.  The copper mining from the past made for some neat things to look at while we were there warming up.

Off to “downtown” we went.  There was a scheduled festival going on in the park in the middle of town which promised ornament decorating for the kids, caroling and a tree lighting later in the evening.

While trying to get to the park we realized we were on the wrong side of the “river” that had formed in one of the streets due to all the rain.

This wasn’t just a small trickle.  It was a fairly deep (I’d say over a foot in the center, fairly wide and definitely fast moving river.  We sat at the riverbank contemplating if or how we should cross.  We must have stood there for 5 minutes or more coming up with plan after plan that we then tossed out.  We saw one woman trying to cross over to her husband and ended up using a passing by motorist as a bridge to get over.  Very clever!  Since cars were few and far between we decided our best bet was to go all the way back from where we came from and cross over where the river went underground into the inactive mine shaft.

By that time we were all very cold so we ducked into Thuy’s Noodle Soup restaurant to warm up with a delicious and gigantic bowl of ramen.  I think the girls had more fun kissing each other as they ate the noodles than they did eating the soup as a whole.  Ha!

After stopping at a couple book stores to refresh our supply, we finally made it to the park to find that the event had been apparently cancelled as the place was empty!  We were disappointed but also glad that we could go warm up as it was getting late.

We always relearn on our road travels that anything more than one rainy day in a row is a bit unbearable.  It’s kind of like being locked inside a bottle with two emotional bombs.  Sounds like fun, right?  At least we were able to get out for a bit on the one rainy day.

On our last morning we visited the Bisbee Farmer’s Market.  It was great!!  Super sweet vendors and a very large variety of goods.  We had never tried taquitos before but there was a lady there selling them for $1 each and they were delicious!  They were kind of like Mexican style fried egg rolls.  Obviously it is fried so you wouldn’t want to make a meal out of it but it was a delicious side!  All the prices were super reasonable.

We’ll have to come back and explore more when the weather is a bit better.  Bisbee is a town with a lot of character for sure.