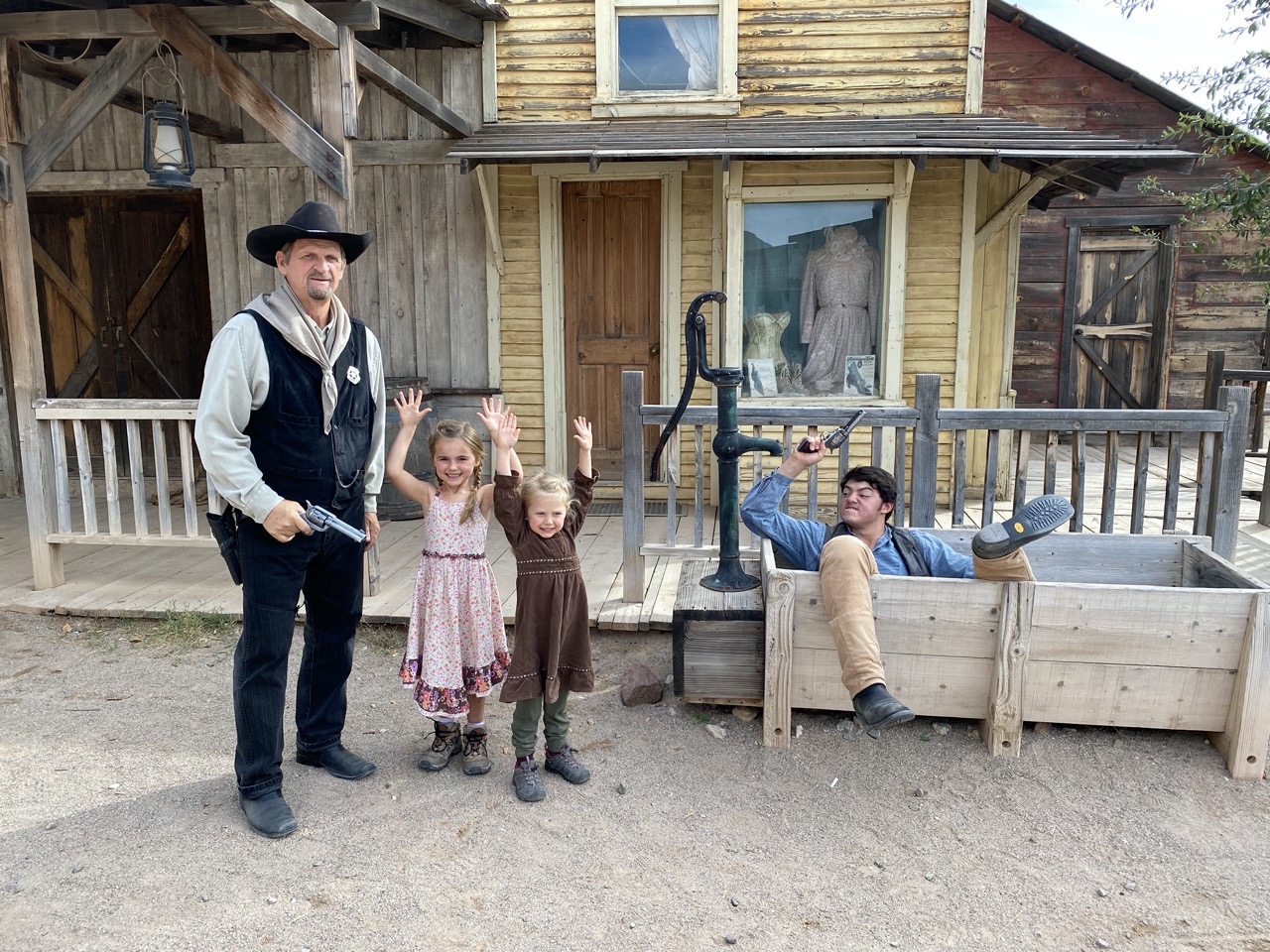 Old Tucson was a short but bumpy drive away from our BLM camping spot.  It is a replica of an old western town which has been used and still is being used in numerous films, which the town proudly displays.

There is an entrance fee that gives you access to free shows, which are basically back to back all day long, and rides on the carousel, train and gas track cars.

You then could pay extra for other things like zip-lining.  It was entertaining to say the least!  They had actors and actresses throughout the town playing the part of an old western which makes it so much more fun!  The costumes were great!

We went to a talk about being a store keeper in those days and the gentleman, ______, giving the talk took such a fondness of the girls’ interest that he let them go “behind the scenes” and play with the paper model of a western town he had made.  He did such a great job and was so kind to the girls.  Later in the day he found us at a show and gave the girls fudge from the town fudge maker.

In another good show Justin was actually a surprise guest of honor.  The dancing girls of Old Tucson were lucky to have the lovely Justin as their backup dancer sporting a long tutu and black wig.  It was pretty funny.  The lead girl had a nice voice and played the part with bravo.

We also really enjoyed watching their stunt show.  In this the actors demonstrated all sorts of tricks movies use including crazy stuff like jumping off a roof and landing safely.  Besides my stomach being tied in a knot when we were finished watching it, it was neat to watch!

While exploring we found a little train station that had a little pull crank attached to a wooden flag.  We saw a sign describing how these used to be used to motion to the train that you wanted to board.  We tried it and the town train actually stopped and picked us up! It was super fun and we were all tickled pink that it worked! Such fun!

It’s a place I would highly recommend.

The next day was my birthday and Justin did a great job making two raspberry pies to celebrate.  The girls were so sweet and wrapped the craft kits that they had made me in To Go containers and towels which they wrapped twine around to look fancy.

I then made some jackfruit salsa and we all sat outside thoroughly enjoying our pie and salsa.  The girls were so good and played in our camp mesquite tree all morning getting along great!

Justin and I got talking about our little one’s feet again and wanted to be sure to figure something out to help her before we went into Mexico when the territory would be more unknown to us.  We wanted to get a skin scraping done to either rule out or confirm athlete’s foot so we would know how to proceed treating it.  However, after calling some podiatrists Justin found that none did a skin scraping but that he found one that would do a consult for $85.  In reality this is an absolute rip off but in the medical world it is cheap.  We begrudgingly decided this was better than nothing.  Later we realized we were absolutely wrong.  Nothing would have been better.  We have found that with the internet at our fingertips our experience with doctors is that they don’t usually have much to offer.  We have already researched so much before going to a doctor that we find them just regurgitating all the knowledge we have already researched.  I’m sure some have some first hand experience with things therefore have a first hand account to go off of rather than an article or study we are finding on the web but overall it has not been worth it to see a doctor for opinions.  There is the exception of testing or lab work.  This obviously cannot be done at home at all or very easily.

Our little one fell asleep just before getting to the doctor’s office, because she was up at night with itchy feet.  The brilliant doc who’s 15 minutes is worth $85 said that our little one had bad shoes and that was the problem.  This was of course after he was SURE she had lots of other issues which I ruled out after changing treatments many times throughout this whole foot saga.  Great!

So, we figured he was probably full of it but a new pair of shoes couldn’t hurt, her condition that is.  It did hurt our bank account.  We spent the rest of the day browsing store after store to find that there were breathable shoes with foam soles (really?!  These are so slick she’d be falling all the time not to mention all the prickers that would pierce through in the desert) or non-breathable shoes with rubber soles.  We finally ended up getting her a pair of what we thought were corduroy tops with rubber soles.  However, after our little one walked the length from the store to the van in the parking lot her feet with already drenched with sweat.  We’ll be returning these!  We called it a day but the next day we went and bought her a $43 pair of breathable shoes with rubber soles!  Absurd!  This is not only the first pair of new shoes I have bought the girls but they were more expensive than the majority of my shoes.  And, she’ll grow out of them by the end of summer I’m sure.  Dear me!  We are banking on this being a turning point for the better for her feet and if expensive shoes does the trick, so be it.