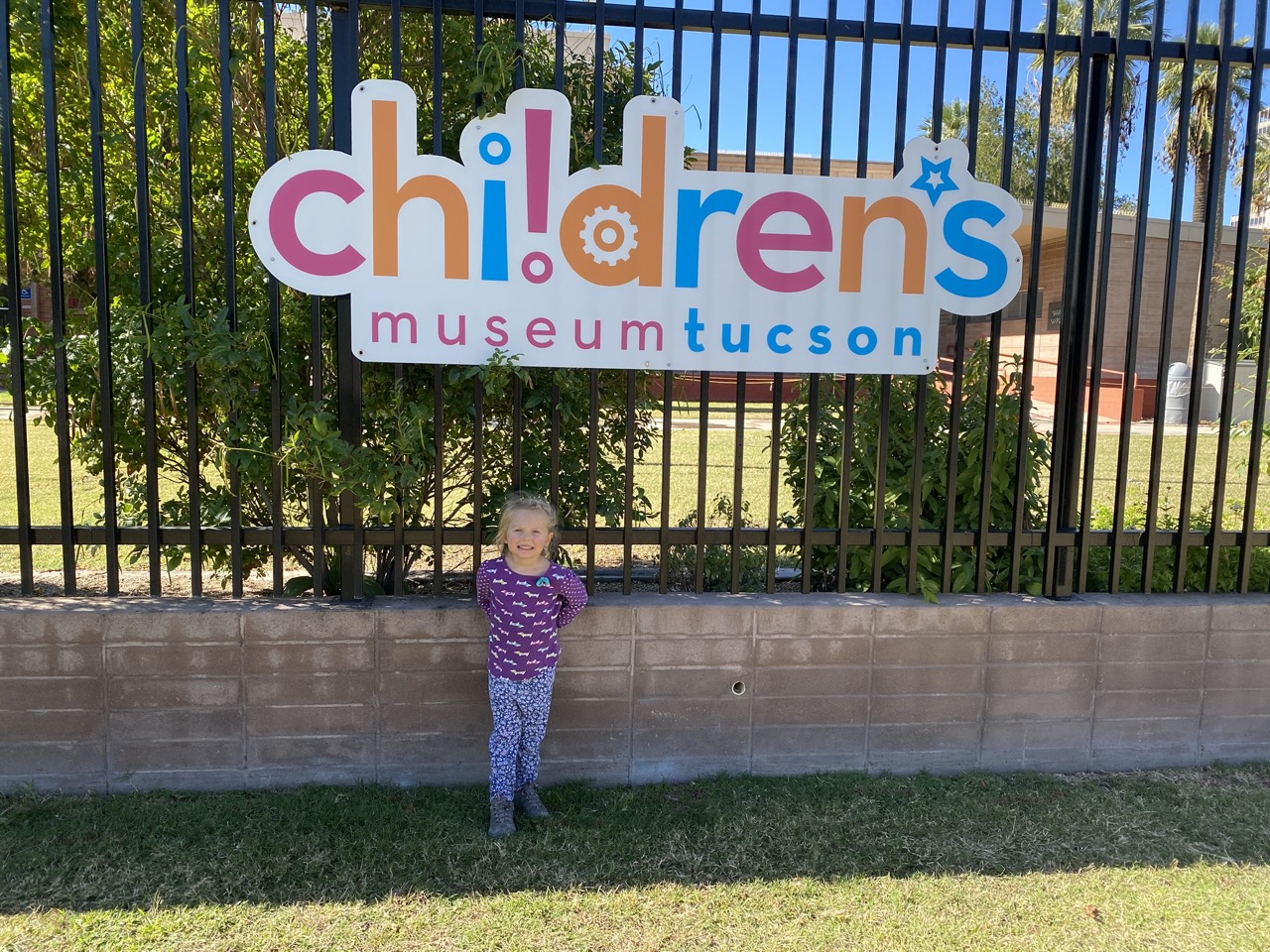 Last year we didn’t get to really explore the city of Tucson, due to a laundry mishap that sent Justin back to Phoenix. So this year we were excited to check out the city. There’s definitely a lot to like about Tucson– from the convenient BLM camping near the city, the hip vibe near the University, and the influence of Mexican culture.

On our way to Tucson we ended up finding some fun pit stops. We passed through a really cute town named Wilcox.  It was tiny but had a lot of character with several antique shops, consignment shops and cute store fronts.

We stopped for gas and, after probably being tired of hearing me oogle over the shops, Justin found a place to park so we could look around.  I’m glad we did.  The girls found some $0.50 movies and the owner was so sweet he ended up giving us a bundle of slicing tomatoes, grapes and cherry tomatoes!  He said he was just given a bunch of produce and wanted to share in the wealth.  It was so very kind.  We all very much enjoyed it the food and his kindness!

We next traveled to the Pima County Fairgrounds outside of Tucson to pay to dump our tanks ($5) when we realized there was a horse show going on on the grounds.  It was free for the public to watch so we took full advantage.  It was so much fun and reminded me of when I was little and my sisters and I grew up around horses.

Finally we arrived in Tucson to some BLM land where last year we had met a really sweet full time family. Despite it being packed on a weekend we ended finding the same spot our friends had last year.

There is a tree next to the camping spot that the kids practically lived in last year and this year it was the same minus their friends.  We miss that our friends aren’t with us again this year.

I tell you, having a camping spot with entertainment just outside the door is dreamy!  Trees and rocks are the best.  It’s so nice having a place where the girls can play, have a bit of independence yet still be where I can keep an eye out for them.

The girls came up with a waving contraption out of rope, harnessed one another together “just in case one of us falls,” created a home with bed nests in the branches, compost toilet, camp fire ring and so many other creative little touches.  I love seeing them create!

Something we learned from our first day in Tucson is that advertisements don’t seem to match reality.  I had looked up some events we could check out over the weekend.  The first was a symphony that was free for kids and families, offered only a handful of times per year offering.  The second I found was a Winterland Craft Fair that in addition to craft venders they had a bouncy house, a train, face point and food vendors.  Justin found a brewery that said it was kid friendly giving customers front row seats to the local trail that passes through town frequently.  This all sounded like a blast!  The girls got all dressed up and we made a day out of it.

Let me start this part by saying that we had a great day it just wasn’t what we expected.  The symphony was a percussion group performing an outer space act.  When they did play it was great but most of it was them acting out a script about aliens and astronauts.  The percussion players tried to make it fun for the audience with having kids play some instruments but for a number of reasons it didn’t work out well.  The whole act was set to the background of dozens of kids screaming and yelling “mama, I don’t like this!”  It was a lot to ask the little ones to sit still for that long listening to a skit.  The audience got to sit on carpets on the floor for a great view which was neat.  The girls seemed to like it just fine so that was good.

Onto the craft fair.  It was a cute little craft fair for sure and everyone was really sweet.  However nothing but the craft venders and the food venders were actually there.  We asked a woman who had a booth about the kids activities that the advertisement talked about.  Fortunately we were talking to the co-coordinator of the event but unfortunately she told us none of these extras were actually happening.  Okay.

Onto the train viewing brewery.  Woo!  It turned out to be a very dark space with no windows therefore no promised train viewing.  Luckily they did have good popcorn and games so we munched while we played Heads Up as a family.  It was a lot of fun!  The girls acted the majority of the things out with the use of bar stools or with our little one on our oldest’s back as she walked on all 4’s.  We cleared the place out with our shenanigans.  Such fun!

Last stop was a Mexican grocery store.  We were curious what they sold and ended up coming home with some fun things!  We found giant jicamas, a prickly pear, whole jackfruit, yucca root, huge tortillas and a great deal on tomatillos, limes, corn and avocados.

That evening I had to learn how to prepare these foods.  We ended up grilling the prickly pear after I cut all the spikes off and nibbling on raw ripe jackfruit and jicama.

Jackfruit was an endeavor to get the actual fruit out but it was worth it!  The jackfruit that we bought was only 8lbs but its not uncommon for them to weigh 150lbs!  Crazy, right?!  We could only barely handle the amount of fruit that came out of the one we bought and get it to fit in our fridge.

The prickly pear wasn’t bad to prepare but was a bit zingy to eat a lot of.  It would be a great addition to a rice dish or part of a salad or something.

For my birthday Justin was so sweet and bought me off broadway tickets to see Anastasia.  He got me a great seat near the pit!  I was so excited to go but also a little sad that I couldn’t share it with anyone.  It’s fun to be able to experience something wonderful with someone else so you can Ooo and Ahh together.  When I told the girls I was going to the theater while they went to a science museum our oldest was devastated.  She has taken a special fondness of the theater and was wishing she could experience it with me.

Well, long story short I pleaded with the box office just an hour before the show started and exchanged my ticket for two upper balcony tickets so my oldest and I could go together.  I shoved her play clothes and hiking boots into my bag and we quickly dressed her into a dress in the bathroom.  We were both gitty with excitement.

The play was great!  The plot was changed around from the cartoon movie, but for the better.  It just took us a little time to piece the new plot together.  I was impressed that they used different characters and changed other character’s backgrounds but made the plot still fit with the original songs (with the addition of 3 or so extra songs).

The two male leads had amazingly strong voices but sadly Anastasia’s voice was less than spectacular.  The theater ended up being a lot smaller than the Keller Auditorium that we are used to in Portland so upper balcony seats were still great!

Meanwhile, Justin and our 4 year old had a great time at the Children’s Museum Tucson while we were at the play.  I loved looking at pictures of all the dress-up they had fun with.  I do mean “they.”  From the pictures it looks like Justin had just as much fun as our little one!

We ended up having dinner at a really lovely place called the Time Market, within walking distance from the University of Arizona where Anastasia was performed.  It was half grocery store and half restaurant.  It was delicious with a great ambiance.  College towns are always fun!  They have to be hip for the college folk.