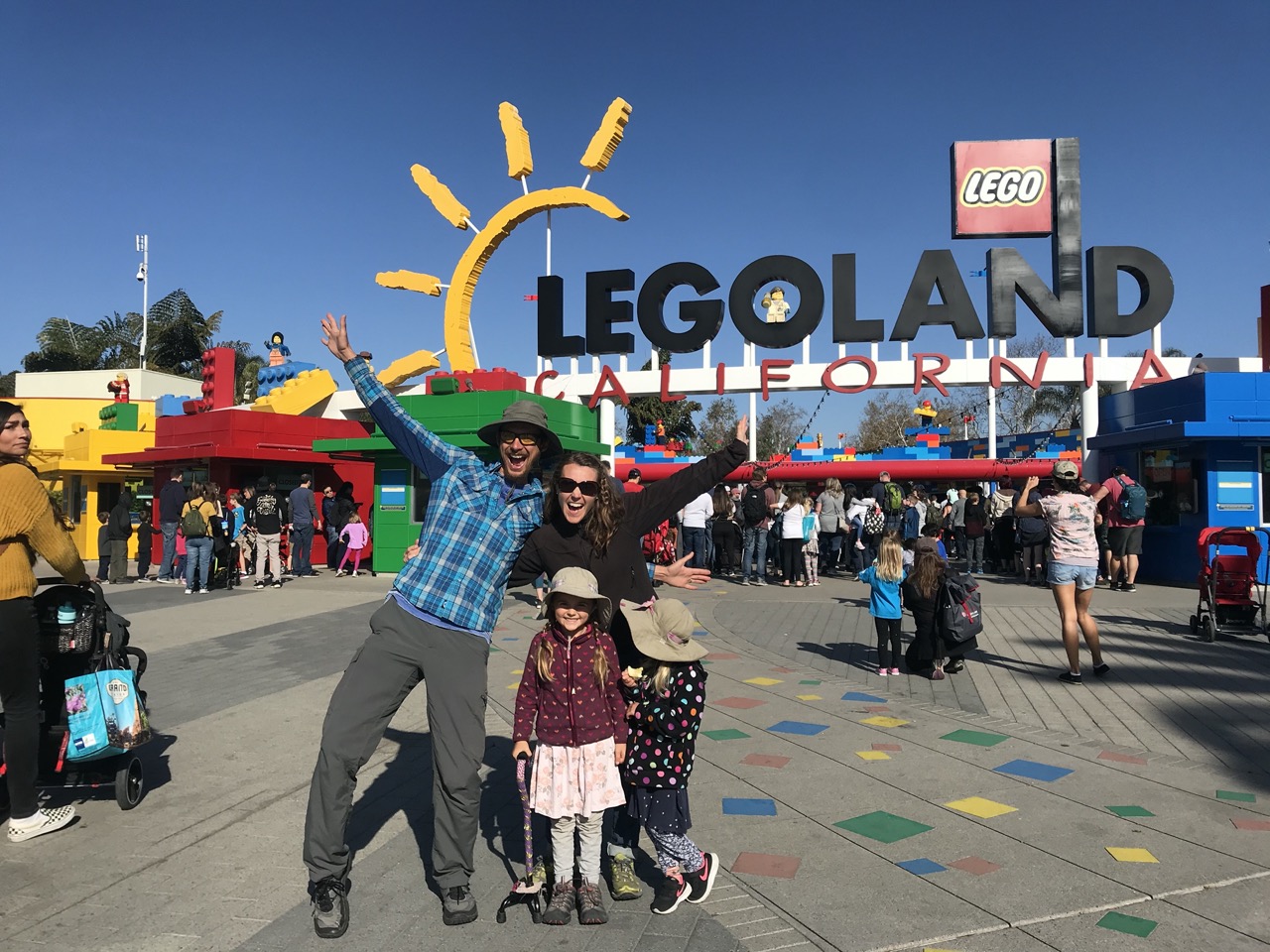 When I first heard that FullTime Families were having a get-together at LEGOland I almost immediately wrote it off under the impression that it was just an overblown museum of LEGOS where kids could look and create.  After all, we have some LEGOs in Portland that the girls can play with for free instead of buying expensive tickets to LEGOland.  However, when someone told me that it’s really an amusement park themed around LEGOS it became more appealing.

We thought it might be a good motivation for our oldest to practice her walking on her healing leg.  We set the goal that she would be able to walk with little assistance from the ride lines to the ride itself.  Our oldest had achieved that by only needing her cane, Goldie to help her walk by the time we spent Valentine’s Day at LEGOland.

I have to say, it was pretty awesome, the song playing on loop at the entrance told us so, “Everything is awesome!!.”  The giant LEGO structures were my favorite.  It was crazy to see so many hundreds of LEGOS put together so exquisitely.  And, amazing that they can get them to stay together so well, especially knowing that more than one kid has probably pounced on the structures.

Because it was such a large chunk of change to get into the place, we kind of felt pressed on time to get to as many rides as we possibly could.  The whole park is centered around little ones so it was nice that almost every ride we passed by was age appropriate for our girls.

No matter how much we tried to convince the girls, however, to do a roller coaster with us they wouldn’t budge.  Our little one said, “I didn’t agree to any roller coasters when we talked about coming here!”  This was Justin and my chance.  Our 30+ year old bodies don’t mesh well with the adult-sized roller coasters at other parks, so we were hoping that we could go on the “scary kids roller coasters” and have a blast.  Ah well.

There were many boat rides, some for the whole family and some for just the kiddos.

We all enjoyed the family rides a lot including a submarine that actually went underwater.  Through the windows you could see real fish and sharks swimming around as well as pretend buried treasure and other items.  The ride was a scavenger hunt for kiddos to find various items which they would enter in on a screen near each seat.  Neat idea.

There were also a lot of rides for the girls to go on together.  Our oldest was tall enough that she could sometimes be our little one’s chaperone which is hilarious.

Most of the rides were based off of scenes from a LEGO movie (so I was told as I haven’t actually seen any) or the rides were designed to make the riders take the place of LEGO people.  For instance, in one we were the firefighters pumping our car to move forward to fight a fire.  The pumpers teder toddered back and forth as LEGO people would.

Driving school for littles and a little bigger than littles was fun for the girls.  Because of their ages our girls were in separate “driving school” rides.  I realized only after our little one had gotten into the little car that she had never actually steered anything other than her bike and was thoroughly confused on how to get the car going.  I think the ride operator must have assumed all kids have done something like that before so they didn’t tell her about the gas peddle.  She figured it out eventually about the same time the ride was ending. 😛 We live, we learn.

The older kid’s driving school was a pretend little village with two lane roads, stop signs and traffic lights.  Only a select few were actually following the road rules, but that’s besides the point.  Justin helped our oldest get out into a car since it involved running before the buzzer started.  Justin asked if he could pop back out on the roadway as the other kids were exiting to help our oldest off again.  The worker told us he would have her just drive herself in the pretend car over to the exit.  However, he didn’t anticipate how cautious our daughter is.  It took so long for her to drive over to the exit that a worker started pushing her car to make it go faster.  I thought either the battery on the car was dying or since the other cars were turned off (since it was the end of the ride) that maybe hers was malfunctioning.  However, when I asked our daughter more about it after she had gotten off, she told me the cars were going way too fast so she was only pushing the gas peddle a little bit.  Haha!  Well, lesson learned for that worker I’m sure.

The last ride we went on was Ninjaro.  I’m guessing this name came from a movie that I don’t know about.  It involved sitting in a moving little cart that swiveled around in front of various screens with villains on them.  It was our job as riders to ninja chop them until they disappeared. There was a little hand sensor in front of each of us that sensed the direction, up, down and side to side actions which then sent a blasting ball onto the screen accordingly.  The machine kept score of how many hits we had.  I didn’t love that it involved so much violence and screens but it was pretty funny to see all of us karate chopping the air!  Sadly, Justin’s little sensor didn’t work (or so he claims :P) so his score was the lowest by far.  Our little one won by a landslide.

The whole park was really fun and I’m glad we went for that fun packed day.  However, that being said, I don’t think I would pay to go back.  It was almost as expensive as going to a park like Disney World which has a lot more to offer.  Making memories and now we have a new theme song for our driving day slumps, “Everything is Awesome!!”