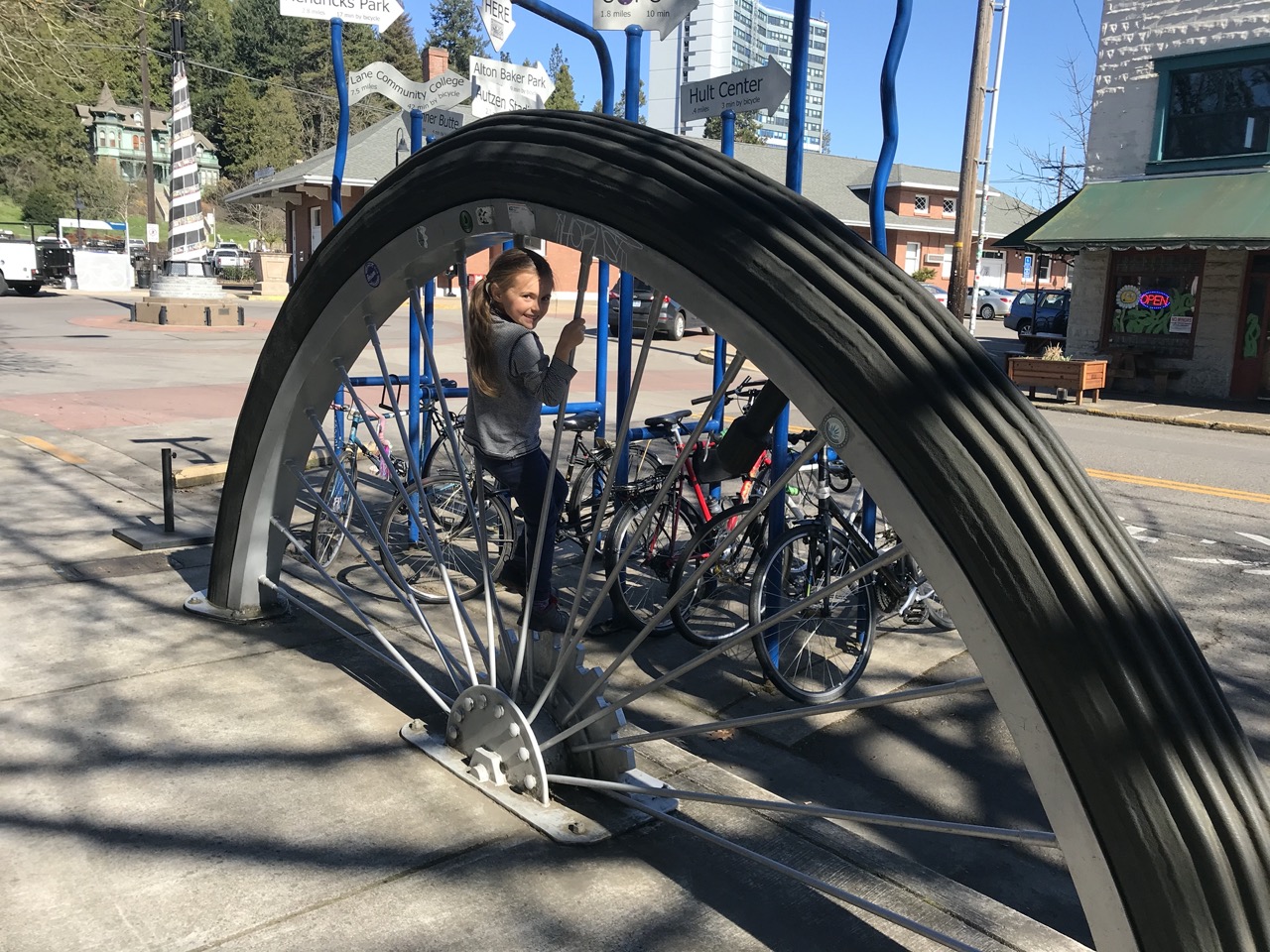 It was the end of February and we only had a few stops left before we made it back home to Portland after 6 months on the road. From Lake Shasta in Northern California we were approximately 400 miles from home and had just 2 more stops: Valley of the Rogue State Park, near Grants Pass, OR and Eugene, OR to visit friends.

After departing Lake Shasta and passing by Mt Shasta we stayed one night at Valley of the Rogue State Park.  It was a funny place with most of the campers sleeping out of their cars, which was a bit strange.  The park did have nice facilities though.

The girls (and I) enjoyed collecting acorn tops and creating a little eatery out of forest treasures.  Having trees back was really fun!

The next day we drove to Armitage Park Country Campground in Eugene.  Very odd place!  We were in desperate need of a laundromat and when we found that Valley of the Rougue State Park’s laundry was closed for the year we were counting on Armitage Park to have theirs open.  Well, after a multi hour run around to get the code for the laundry building I found that all 3 machines were caked with dog hair.  I’m not talking just a little in the seal or something.  I’m talking a complete inside wipe down and a rinse cycle needing to be done.  With time constraints and me being stubborn and not wanting to put the money and effort into it, I dragged the dirty laundry back to the camper.  I was looking forward to being home and popping in a load whenever I pleased.  Justin ended up driving into town and doing one out of our 3 loads of laundry that was ready to be cleaned.  Just enough to get us by until we got home which worked out great!

The campsite we had was unfortunately inundated with dog poop.  It was absolutely everywhere!  There was also a very loud RT (rolling turd– a reference to the Robin Williams RV movie) in the site one down from us.  It was actually pretty amazing the thing still drove.  I wouldn’t have thought much of it if I hadn’t seen the char marks and glass from a recent camper on fire within the same campground.  Eek!  I don’t know what started that fire but I was picturing an old camper with faulty electrical going up in smoke.  I hope nobody was hurt!

Luckily, the site space next to us wasn’t taken so the girls played on the other side of our camper in a wooded section of the campground.  The girls found a really sweet fern fort in the side of an old giant stump.  It was the perfect place for their little imaginations to run wild.

At our last campground of our 6 month journey I decided it was about time I learned how to empty the black tank just in case I had to some day on my own.  Well timed if I do say so myself.  We had a little snafu that the previous camper at the site we were in broke off their connector inside the sewer hole which made it so that our connecter no longer fit inside the hole.  Justin chipped it out with a screwdriver and hammer only getting sprayed in the face with poop water once!  That’s called success folks.  All in all, it wasn’t bad at all!  My opinion may have changed if I was the one who got splattered by turds.

Man, all that poop dumping got us nice and ready to eat some colorful and tasty root veggies we found at the store.  To wrap the evening up we snuggled into our jammies and had a little evening walk where the girls took turns pulling each other in the wagon.

So, for the past couple mornings our oldest has been sneaking down out of her bed and “sneakily” making breakfast for all of us.  It’s tricky to do ANYTHING without EVERYONE waking up in such a small space but, she did a pretty good job and had loving intentions.  Our first breakfast consisted of veggie burritos, seaweed and cereal.  Tasty!  The girls then cleaned Sam the Sloth, aka Justin’s teeth.  Such service!

I decided we were due to visit a good bakery!  We checked out the New Day Bakery and loved it.  Great food, not too sweet pastry options and the atmosphere was so warm and cozy.  We even got to peak into their kitchen to gawk at their giant mixers.  Bakeries make me happy!

We spent the afternoon at the Eugene Science Museum.  We learned that it used to be a branch of OMSI, which is the science museum in Portland, but is now its own thing.  It was a very tiny, one roomed place, but cute.  They had one of those neat sand tables where there is a projector that correlates different colors with the terrain you form with sand.  It’s like magic!  You dig a depression and, BAM, it becomes blue like a body of water.  You build a tower and it gradually goes from yellow to red up top.  It’s basically like a topographical map that is in sync with your play.  Super fun!

They had lots of interactive puzzles and mind benders to learn various things about the human brain or our environment.  The first part of the time we were at the museum it was crazy with school kids.  But then after each of the 2 classes 20 minutes allowed time slot was over it was gloriously quite there.  I was surprised with what total chaos and destruction happened in those 20 minutes.  I think the kids were just so excited to be there and knew they only had a short time so they went from one thing to the next without seeming to get anything educational from any of the displays.  It made us all happy we homeschool.

We ate a delicious lunch at a vegan restaurant called Morning Glory.  They had a huge menu all of which sounded delicious!  They even had a great kids menu with healthy choices for a change.  It’s always so sad when restaurants kids menu consists of basically bread and cheese items.  They even served breakfast all day which, in my book tells me its a good place to eat!

We stopped by an eco friendly shop that had some great stuff.  A lot of the ideas we already used in our home but we gathered some new ones too!  They sold safety razors with replaceable flat blades rather than needing the entire disposable plastic head with the blades on it.  They also sell something Justin and I have been looking into getting; floss that comes in a glass bottle with replaceable spools of floss to go in it.  Neat, right!  With floss it’s always a shame to throw out the entire plastic container every time.

We snagged 3 bags of Bagel Sphere’s day old bagels for $3 total. They were super nice and gave the bagels to us so cheap because they didn’t want them to go to waste. Bagels pizzas, freezer and croutons. Got it!

We met up with some of our sweet sweet friends who used to live in Portland that we haven’t seen in way too long.  It was SO great seeing them and catching up.  Our oldest is the same age as their daughter and it was so good seeing them play together again and with the addition of our little one this time.  Spending time with friends is something so priceless and needed.  Having been away from friends for so long made it extra special to get together before going back home.  It made me wish Eugene and Portland were closer for sure.