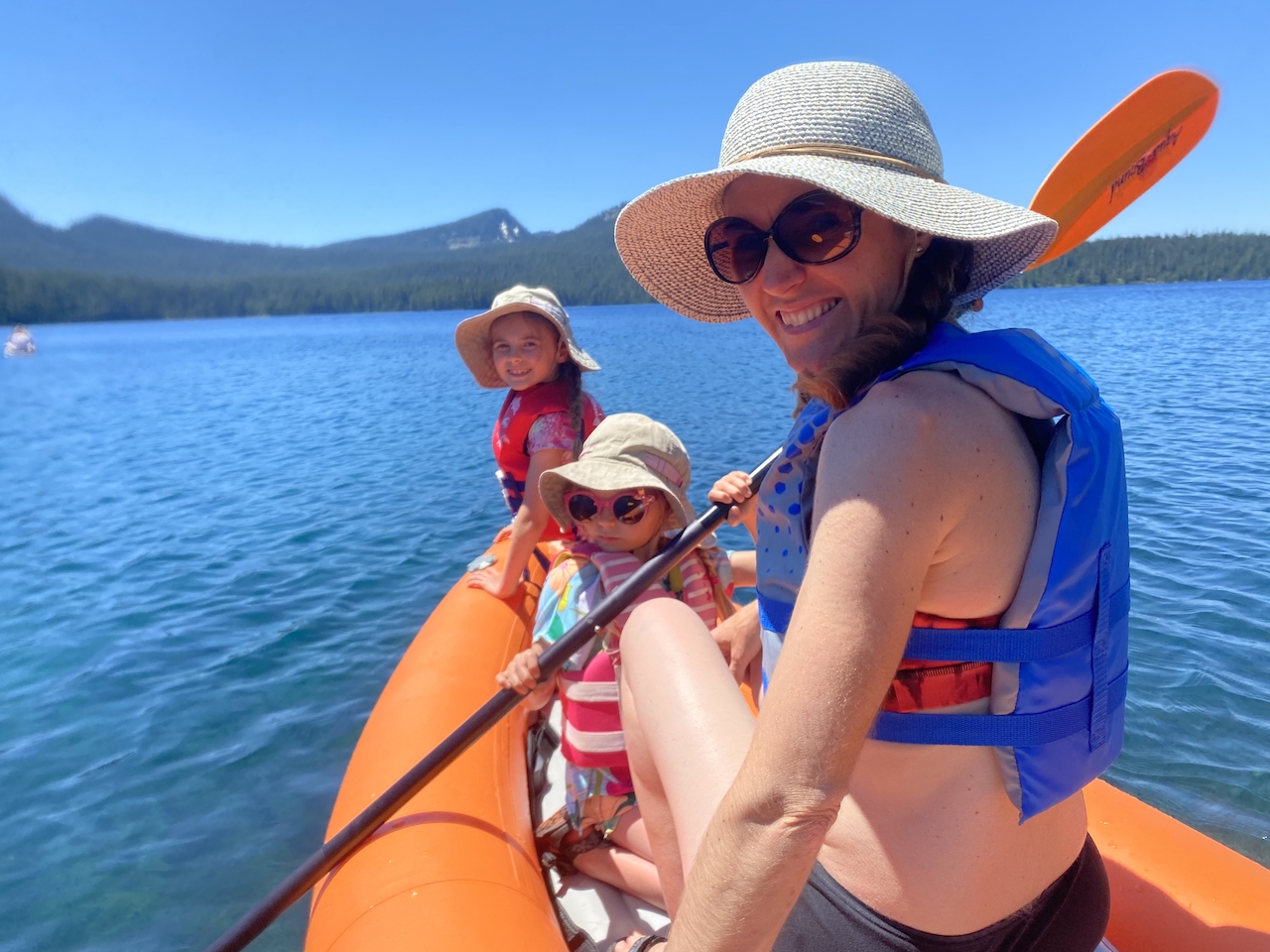 As the warm weather of summer came upon us Justin and I have been working hard to get our To Do list mostly checked off during the week so we can get out and have fun on the weekends with the girls. We have just entered the world of life off the farm!

When Justin and I were dating and first married we had hard shelled kayaks that we strapped to our little car and towed across the US to our home in Portland. Soon after we had our first kiddo we realized they weren’t very practical anymore. We ended up selling them while they were still worth money and waiting until boats made sense again. Well, Justin felt like this was the summer that his boat dreams had come true! Our new realm of exploration was going to include boating.

With some convincing from Justin, we ended up buying a two person inflatable kayak and an adult paddle board. We figured with this combination we would be able to all get exercise, have fun and cool off on hot days. The kayak is self bailing which means it has holes along the side of the bottom so that when a wave (or child) comes splashing over the edge, your vessel doesn’t fill up with water. The down side is you always get semi-wet when you are in the boat. In the summer so far it hasn’t been a lick of an issue but I’m guessing when fall comes we may be sad about this feature. There are positives and negatives to everything.

As far as the paddle board goes, our oldest has all but taken over this one. She stands up and paddles around on it lickety split. It’s actually a good workout for Justin and I with our little one in the kayak with us, to keep up with her. It’s fun to see her get so much joy out of it.

It is so extremely dry here in Oregon this year that all the bodies of water are at all time lows. Many of the lakes we visited had all their docks above the water line and buoys scattering the shore line. The only good thing about the low water was that because it was so low, in some lakes that meant the boat ramp was unusable making it a peaceful paddle on the water and safe for the girls to swim without motorboats.

Each weekend we have made a point to go to different lakes to check out which one we like best. There is one that is super close, within a 7 minute drive called Fern Ridge Reservoir, but unfortunately it is a reservoir that is shallow, full of algae and extremely mucky. We went there early in the season so it wasn’t as bad as it was mid to late in the season. The entire thing was about 4 feet deep with a small exception for right in-front of the dam and there it was probably 7 feet and was bathtub temperature water with about 9″ of sludge on the bottom. As you can imagine we stayed in the boats most of the time and kept our mouths shut to avoid splashes.

On the way home from the coast we stopped at Jessie Honeyman State Park which had a fairly large sand dune attached to a lake. When we were on the dunes it was quite windy and chilly but down at the lake there was less wind and people were paddling on the water. We’ll come back to this one and will bring wetsuits!

Waldo Lake was another body of water we visited with super clear water because it was ice cold. The pros were the lake was secluded, clean and beautiful! The cons were that it was quite a long drive from our house, had some mosquitos and was freezing. We were very thankful to have Azul (our Sprinter) to change and eat our meals in while we were out all day adventuring.

Baker Bay, on Dorena Lake, was next on our list. This one had camping available. When we pulled into our campsite we realized we had visited this park long ago when I was very pregnant with my youngest and my oldest was 2 years old. My how things looked different with the water so low! Baker Bay was mostly clear of algae, wasn’t too cold or warm and had the convenience of the campground right there. There was also a giant family reunion going on near our campsite and they very generously let us use any of their tubes when they weren’t using them (which ended up being most of the time we were there). It made our camping trip even more special for the girls.

Last but not least was Fall Creek Lake. Ironically this was one of our favorite bodies of water and we don’t have pictures of it. We must have been having so much fun we forgot! The water was just the right temperature; made you cringe a little when you first got in to cool off but warm enough that you could swim for a bit without turning blue. We only saw algae in little areas along the side of the lake that water had been beached in.

As we explored the various bodies of water in our area we tried to find camping spots near or on the water to make things more convenient as we had at Baker Bay. It made it possible for more exploring and not having to worry about rushing home before bedtime. We also could leave the boats inflated to save us time. We tried to take advantage of hikes that were nearby the campgrounds as well. It was nice to be able to camp together as a family again even if it was just for long weekends.

To extend camping a bit we thought it would be fun to tent camp with the girls. We had wanted to do an overnight backpacking trip with the girls this year but wanted to work out the kinks first with a little backyard tent adventure. We would of course be sleeping in a much smaller tent on the trail but we glammed out with the larger one for our first run. Bedtime was a bit loosey goosey because there was nothing between us and the sky except a thin mesh fabric. It was fun though looking at the stars and constellations with the girls and searching for bats and skunks. I got so sleepy laying down with the girls that Justin and I ended up going to bed when the girls did under a clear star lit sky.

Scouting out trails for potential overnight backpacking trips was fun! We found a good one with a swimming hole but it was very close to some of the forest fires going on here on the West Coast. It also didn’t get cell service which obviously isn’t expected but with managing 3 rentals it does make things tricky. I also kept thinking, “What if the fire takes a turn for the worst and people are asked to evacuate the area? We would never get the message camping there.” Clearly we would see the smoke getting thicker but not knowing the best way to escape would be so dangerous. We put off backpacking until after fire season or maybe next year. Not worth the risk!

In our exploring we found that Eugene has an amazing bike path that follows the river. The trail goes some 40 miles but we rode about 5 of it with the girls. We all had so much fun discovering new parks along the way, watching river floaters, scoping out put-ins for the boats and riding bikes as a family again.

From our camping trip to Florence we found that there was still a lot to explore there and we wanted to be sure to visit again soon. We had a free weekend recently so we decided to spend one day in Florence and the other day boating on the Alden Baker Canal in Eugene.

In Florence we stopped at some great sand dunes for the girls to play. There was a jetty by the dunes breaking the waves for boats to connect into the Siuslaw River. When we climbed to the top of the dunes we had such a breathtaking view of the powerful work that jetty was doing. The girls enjoyed running up and down the dunes and watching boats roam the waters.

Not far from the ocean is the beautiful nook called Jessie Honeyman State Park that we had visited previously. This time we were prepared with wetsuits and our boats. The beach was crowded but because we had boats there were private beaches we could get to where we could be alone and the boat put in was nearly empty. The water was the perfect temperature with our wet suits, really not that chilly at all. I wore mine because I’m a cold water sissy and the girls wore theirs because they were in the water a lot of the time we were boating.

Justin got the girls a little stand up paddle board of their own and they had a blast on it. Our younger girl was mostly the passenger, as I was, and our oldest and Justin were the drivers. I tell you, that girl is quick! There were many times where Justin wasn’t able to keep up with that little speedy driver of ours. So far she has never fallen off. I can’t say that about the adult driver of my vessel. We live, we learn, we fall, we get back up. We actually almost capsized on the paddle board that day. I saw our tied-in belongings getting closer to the water, then in the water and it was a slow motion knowledge that we were about to go over. It wasn’t until the last second that Justin grabbed my head and shoulder to steady himself which righted the boat. Ha! It must have been funny to watch!

The next day when we boated on the canal Justin took the time to learn some new turn tricks on his paddle board. The canal put-in was perfect, water temperature was lovely (without wet suits), the bottom was pebbles and not mucky in the slightest and the grassy bank to get in was gradual so the girls could do it themselves.

It was a beautiful paddle upstream which then opened up into a little pond which the local ducks and geese call their home. The moving water and narrower parts of the canal were lined with this magical seaweed that was flowering with white blossoms underwater. I couldn’t get a picture of it because of the reflections on the surface of the water. You just had to be there. It was like a thick carpet, maybe 1-2 feet deep, of the delicate green plant. I identified it as a hydrilla. It wasn’t slimy in the slightest and parted in the middle of the canal where the water was running the fastest, to form a canyon like area. It was a lovely place and we will return someday soon.