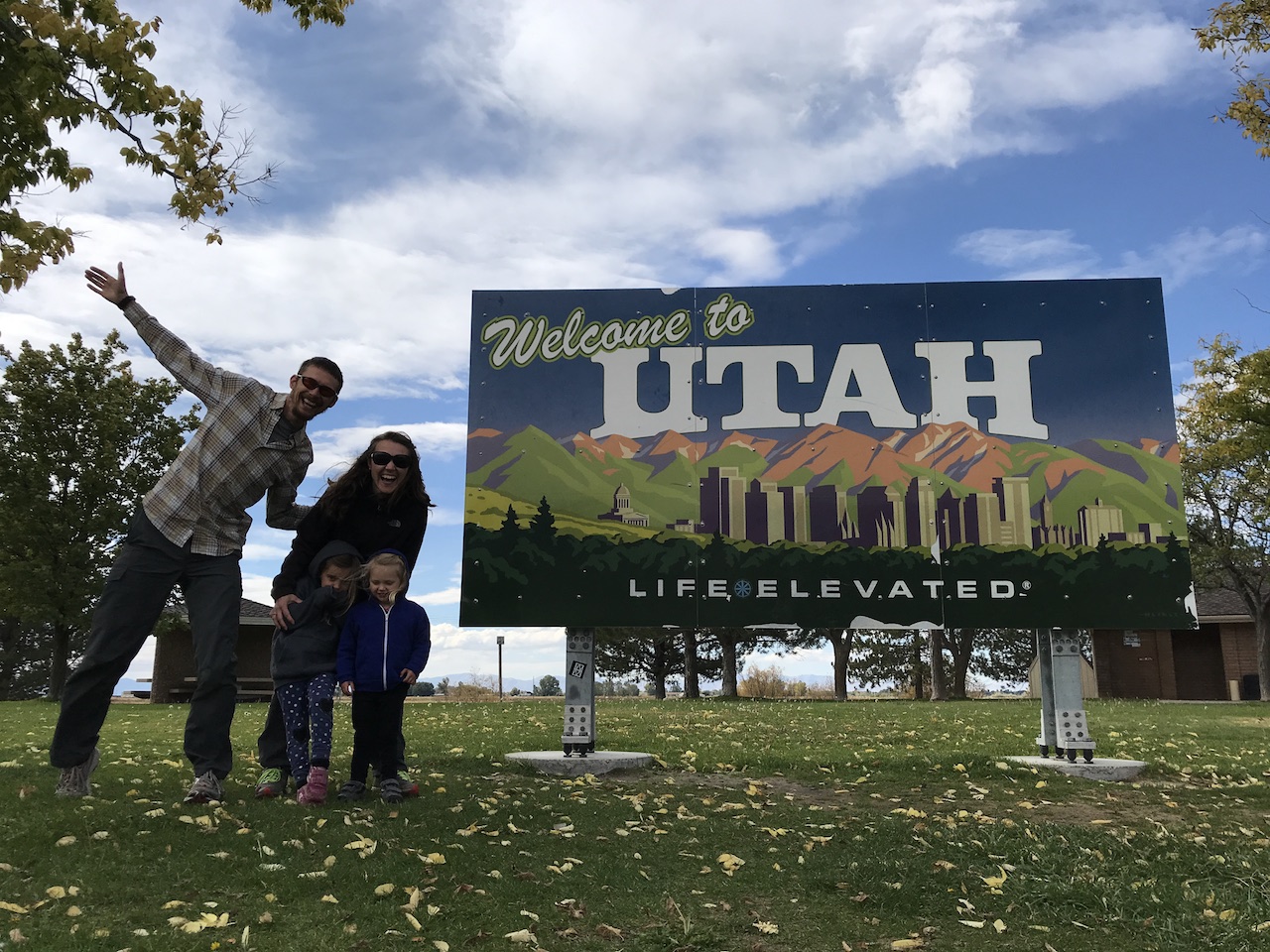 We entered Utah 3 days ago and have spent our time exploring Salt Lake City.  Well, trying to anyway.  This city is oddly bland.  We wanted to stay for 3 nights so we would have 2 full days of exploring but as it turns out, that might not have been the best choice.

Oh, Salt Lake City.  We saw bike lanes on the main roads and assumed it would be a fun city to explore by bike with lots of interesting neighborhoods to check out.  Sadly, we were wrong.

On the first day we biked from the KOA where we were staying into the city; only 15 short minutes away with friendly bike lanes.  Fun!  Justin pulled the girls in the bike trailer while I felt like I was floating on a cloud with no passengers on my bike.

We peeked at the Mormon churches/castles in downtown.  The campus is gorgeous and also a little unbelievable with it’s stone architecture, fountains and manicured landscape.  We learned that 40% of Salt Lake City residents are Mormon.  This is clear when you walk around downtown.  We say sky rise after sky rise labeled “Church of Later-day Saints Office Building,” “…”Administration” and so on.  Pretty incredible that the prevalence is so high.

We explored on foot once in the city to “hip neighborhoods” which all fell flat.  There were maybe one or two semi-interesting shops at each neighborhood we looked at.  Something we noticed is that the city neighborhoods seem to be set up similar to strip malls; large concrete buildings with little signs above each door telling the passerby what it contains.  It all felt very sterile with no unique or artistic qualities that would catch your eye or make one want to come in.  One place looked just like the next with the exception of the font and letters on their sign.  Many neighborhoods were also displayed along 4 lane “highways” which was anything but inviting.

Call me crazy but I like to find neighborhoods nestled in among artistically designed store fronts that call me in with their use of beautiful colors, textiles and, I don’t know, wood rather than steel and concrete.  If stores are successful in advertising themselves a pedestrian should have the urge to buy your goods without ever setting foot in your establishment or at the very least have the desire to look inside to see more!  Ah…Salt Lake City.

One great perk, other than biking around for the day, was Liberty Park.  It had 3 playground areas all rolled into one.  My favorite part was the outdoor instruments they had out to play.  They had a steel drum, organ pipes, giant finger piano type instrument and a great sounding xylophone.

By the end of the night we were so disheartened by the Salk Lake City experience we almost asked if we could get our money back from the KOA and leave a day early.  However, we thought we must be missing something so instead, we created a plan to make day 2 more successful.  Maybe the draw to the city isn’t in the cute neighborhoods.  Maybe it is the outdoor activities?

Day two we planned a short hike planned near the REI which we were stopping at.  We prepped the girls for the hike reminding them about their dimes they could earn and brought more warm clothes since it’s been a bit chilly here when the sun isn’t out; low 50’s.  However, after seeing a hand written “suggested hikes” sign in REI, we rerouted our plans to hike the Red Butte Garden.  This 2 mile trail promised great views of the city from the beautiful mountains which surround the city.  We were all pumped and ready to get some great exploring in!

Upon arriving at the “trail head” which was actually a monstrous welcome center type building we learned that they were charging people to go on this hike!  What?!  Just a measly fee of $42 for our family!  Are you kidding me?!  Pay $42 to hike at a snail’s pace with two little ones who may or may not need to be carried for part of if not the entire way?  No way!  We chose to hop on another path just down hill of the parking lot from the oh so sacred garden above.  We were told that there were great hiking trails that led off of this gravel path.  However, to get to those trails, we had to go all the way around the fenced/barbed wired ground of the “garden.”  Little did we know at the time, this lead up alone was about a mile.  By this time we had all shed one layer of clothing and the girls were tired of the stale path which led to no where special.  One of us could have taken a nap and still caught up with the rest of us at the pace we were going!

When we finally reached where the gravel path/road led into a walking/biking path, the girls and I had some lunch while sweet Justin ran back to Dimes (our van) and brought it to the parking lot of the new trailhead.  We dropped off our layers and contemplated which mode of transportation would be best on the trail for the family.  We couldn’t decide whether we should bike, walk with the stroller or just all walk on foot.  After Justin took all the bikes off Dimes, we decided against bikes and ended up going on foot.

About 20 minutes later we checked the weather and found that it was supposed to rain within the half hour.  Ha!  So, Justin ran back to Dimes and gathered our rain gear.  Well, lots of complaining later we decided it was best for Justin to run back yet again (!) and grab the stroller for the girls.

Meanwhile on the trail we are continuing to follow the barbed in area of the garden passing signs warning people from entering.  What in the world was in there?!

We also learned that this must be the place that all dog walkers go because every 10 minutes we were greeted by a pack of unleashed dogs which would bound over to us barking, licking, sniffing and jumping.  Something that was particularly frightening for my 5 year old that does not love dogs.  Being a Mom of two little ones, I was also a little startled by a pack of dogs we didn’t know running at us full force.  I instinctively scooped the kids up out of face to face reach of the dogs but it wasn’t the most pleasant experience for any of us.

Anyway, the girls ended up earning their dime for the “hike” but by the time we actually reached the path through the woods, nobody, parents included, were up for dragging the crew up there. We took a trailhead picture (about 8 times since we couldn’t get timing right; working out the quirks still) just as it started to rain!  Haha, what a funny day.

On our way back to the campground we decided to give one more neighborhood, Sugar House, a try.  From the drive through the main streets we saw two places that looked like they could be promising but felt too defeated to check them out further.

So, after all of that…Salt Lake City isn’t our favorite place and we wouldn’t recommend it unless you are a Mormon (great churches and support) or you stay outside of city limits and do some hiking or mountain biking.  Off to our next destination!