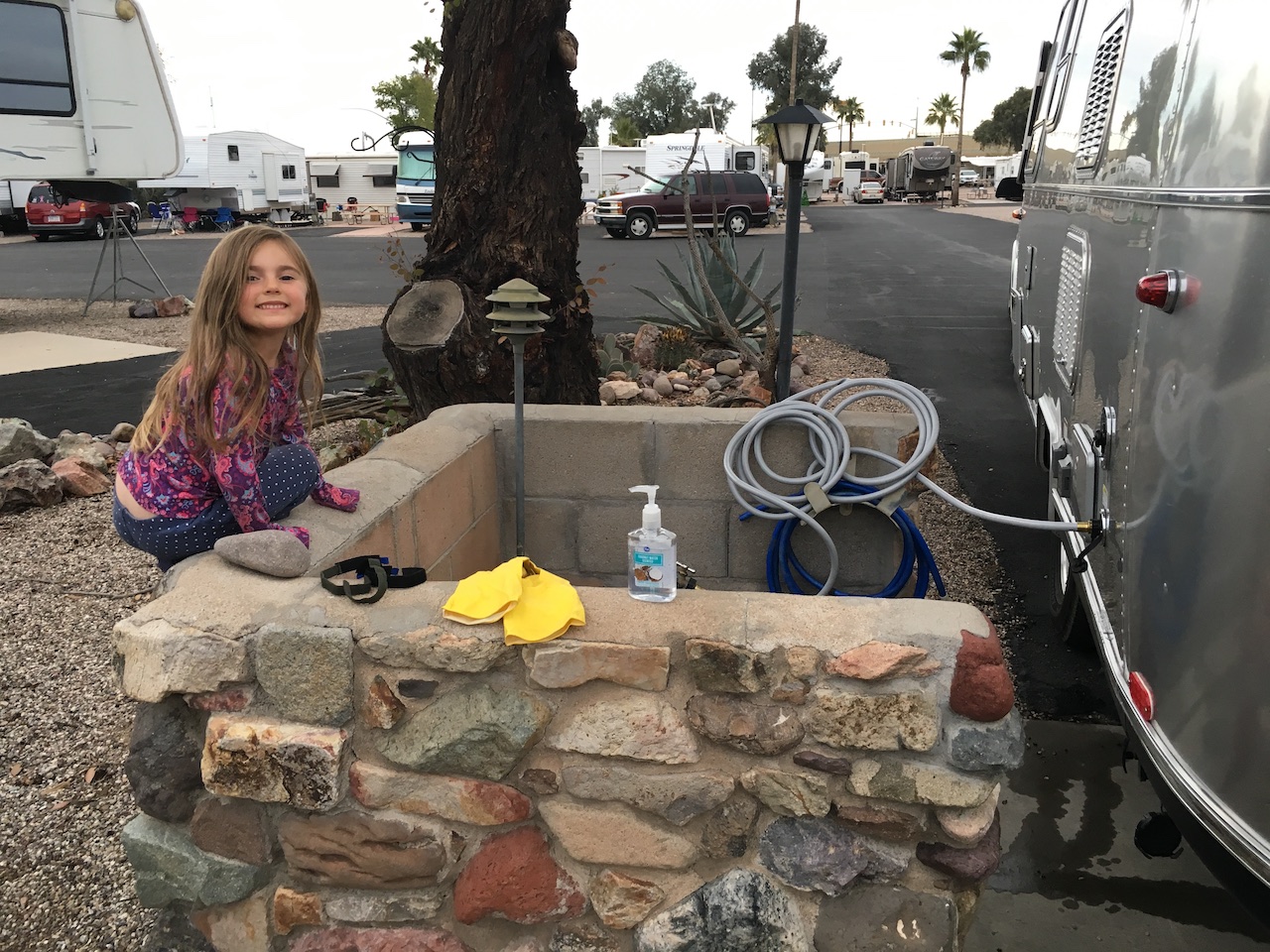 I don’t usually create an entire post about driving days but this one in particular deserves a post itself.  What a day we had!

The morning started off with the girls and I going for a short hike so our oldest could show me, before we left, a rock fort on the desert hillside.  Justin and I put some effort into buckling things down inside Wobbles with the plan to finish when the girls and I got back.  Before the girls and I left, I helped Justin align Dimes to hitch up.  Once that was complete we headed up the hillside.

The rock fort WAS pretty neat!  There were lots of great climbing rocks with various tunnels and different kinds of lichen showing off their bright green and yellow colors.  There was even some moss!  On the way back we found some hidden rock art that brightened our morning.

Upon arriving back at Wobbles we were confused to find Wobbles in a new spot and with the interior rug draped over the front bike rack of Dimes.  Why was the rug out when I had just vacuumed the camper the day before?  We would soon find out.  Justin decided to move Wobbles after hitching up so that he could get a better angle for the load bars to be attached.  Okay, makes sense.  But that didn’t answer our question about the rug.  Well, turns out, Justin did NOT think to button things up in Wobbles before moving.  Before leaving on the hike I had just made 5 cups of hot mint honey tea and had it on the counter to cool.  When Justin had moved Wobbles that, along with a long list of other things fell off counters, crashed out of cupboards that hadn’t been closed…and so on.

Exasperated, at the thought of sticky tea being dumped all over, I told the girls to go play because we weren’t leaving any time soon.  Our friends graciously let the girls into their camper to play while we assessed the damage.  Turns out, it was actually much worse that we expected.  Nothing drastic of course, but at the time it was!  The fall had also knocked my travel tea mug, which was not fully closed, and again, full of hot mint honey tea, onto the kids bed.  I lifted my mug to find nothing in it, yet everything under it soaked with bright green sticky tea!!  Yes, pillow cases, pillows, sheets, blankets, the whole works.  I was so flustered about the whole thing I forgot to take pictures!  But believe me, it happened!

Our plan had been to do a couple errands and get to a BLM site with maybe even time to explore a bit.  However, this plan was instantly changed to a laundry day.  Justin dropped the girls and I off at a Walmart to get some groceries and craft supplies while he drove to a laundromat to clean up the mess.  After then stopping at a couple more places to stock up the whole ordeal took some time.

After bringing the clean laundry back to Wobbles, Justin became suspicious of how few clothes there were.  He had me look it over and the first thing we noticed that was missing was my bra (one of two).  What on earth had happened to it?  Justin assured me that he stuck his head in all the washers and driers he had used to be sure he was leaving nothing behind.  He had left our wash alone for 10 minutes while he cleaned pillows in the sink and had left our clothes drying in the drier while he went to a nearby store to run an errand.  But, wait, he didn’t remember taking my bra out of the washer and it doesn’t go in the drier.  Something wasn’t adding up.  Did someone take my bra out of the wash??  I’ve heard of sick things like this happening and we were beginning to think it must be the answer.

We ended up driving back to the laundromat so I could look in the machines or see if maybe someone already found it and plopped it ontop of a washer or something.  All the machines were in use when I checked and only lonely socks and a random ripped T-shirt were strewn on the tops of the machines.

Well, it was gone we supposed.  Onward to the dump station so we could set up camp for the night and figure the whole mess out the next day.  We arrive at an RV park with a dump station just before sunset.  Justin went to dump the black tank but, hmmm, that’s strange, not much was coming out.  Oh man!!  Did we have a clogged poop tube?!?!  Yes, indeedy we did!

Okay, Justin thought, we’ll fill the black tank with water to flush the clog right out.  The pressure of the water has got to be enough to unplug whatever is stuck in there, right?  I stayed in the bathroom and watched as the black tank filled up; 40%, 43%, 50%.  We stopped there but still nothing!

YouTube, don’t fail us now.  What do we do?  People suggested boiling water and dumping it down the toilet.  Others suggested ice cubes.  However, neither of these things would work since we just filled the black tank with a bunch of water.  Justin tried looking in from the top and the bottom.  No luck!  The only other option was to, dare I say it, DIG it out!  Ahh!

No metal coat hangers to be found in our camper so off our littlest one and I went to the main office to see if we had any luck there.  The main office had just closed 5 minutes before.  Oy!  So, we went through the bathrooms hoping someone left a hanger behind.  Nothing!  Finally, we spotted some people lounging around a TV sipping coffee and chatting.  When I asked if anyone had a metal coat hanger we could have, telling them what it was for, one sweet sweet man named Rick thought he maybe had one in his camper.  Our littlest and I followed him to his camper and he did in fact have one!!  Hurray!!  We thanked him and brought our new tool to Justin, the poop man.

He tried using it from the top to see if it would reach with no luck so into the poop tube he went.  At first we just saw a mushy poop covered toilet paper plop out (sorry about the descriptions but man, this is nothing to experiencing the live version).  This toilet paper turned out to be just a preview of what good things were to come.  After jimmying the hanger around the poop tube bend Justin hit the mother load.  Loads of raw sewage and toilet paper that is.  BAMM!  SPLASH!  Ahhh!!  Out exploded foul raw sewage!  The poop man did in deed get splashed by the explosion.  Just a small drizzle on his sneaker.  Oh, it could have been much worse folks!  It was hilarious!!  Hilariously disgusting!

Another obstacle: Justin couldn’t pull out the hanger unless the poop tube valve was wide open, therefore, he had to let the sewage just keep pouring out!  The grand finale was a massive TP/poo blob plop.  Well, we can check that off our list.

We’re still not sure why that happened.  There were so many factors that were different than usual.  We were using a new kind of TP, more plush than in the past, Wobbles was in one place for 7 days with a full tank which is the longest we’ve stayed in one place and without being too graphic, Justin goes a handful overboard with TP usage.  Maybe it was the combo of all these things but hopefully we don’t have to experience that again!

Okay, with that out of the way we could finally get to camp.  By now it was dark and we were worn out.  While getting things ready for bed, we noticed more and more of our clothes were missing!  Handmade nightgowns, handmade pj pants, snack sacks, shirts, socks…  The list went on and on. What happened in there??  The girls and I were now a ball full of emotions ranging from fury to sadness.  While the girls and I were weeping the loss of our few belongings on this trip it dawned on Justin that he had indeed washed two, not one loads of clothing!!  But he was certain he stuck his head in each machine to check for stragglers.

We needed answers so I asked (that’s a nice way of saying that) Justin to call the laundromat and try and sort it out.  The owners of the laundromat were so very sweet and started looking at video surveillance while he was on the phone.  The owner told Justin he would ask the cleaners to look and report back if they had found the items we were missing.  The owners were out of town but they would be back the following day and would look for them too.

Nobody slept that night!!  I mean really, none of us.  It was awful.  The next morning as soon as 8am rolled around I had Justin call back the owners to get an update.  The owner reported that they had in fact found the videos of Justin doing laundry.  He did in fact stick his head in the washing machine to look for stragglers.  Too bad he stuck his head in the wrong one!!!  Oh my word!  Was this a plan for Justin to never be in charge of laundry again?  Because, it worked!

By this point we were in Tucson, hours away from the laundromat.  So, guess what the next day had in store for Justin.  Yup, retrieving our laundry!  He spent the day driving the five hour round trip to get our laundry.  When he arrived, he found that the owners had rewashed and dried our laundry for us.  How very kind!  What a sweet couple!!

Needless to say, we did not explore Tucson.  Next time!