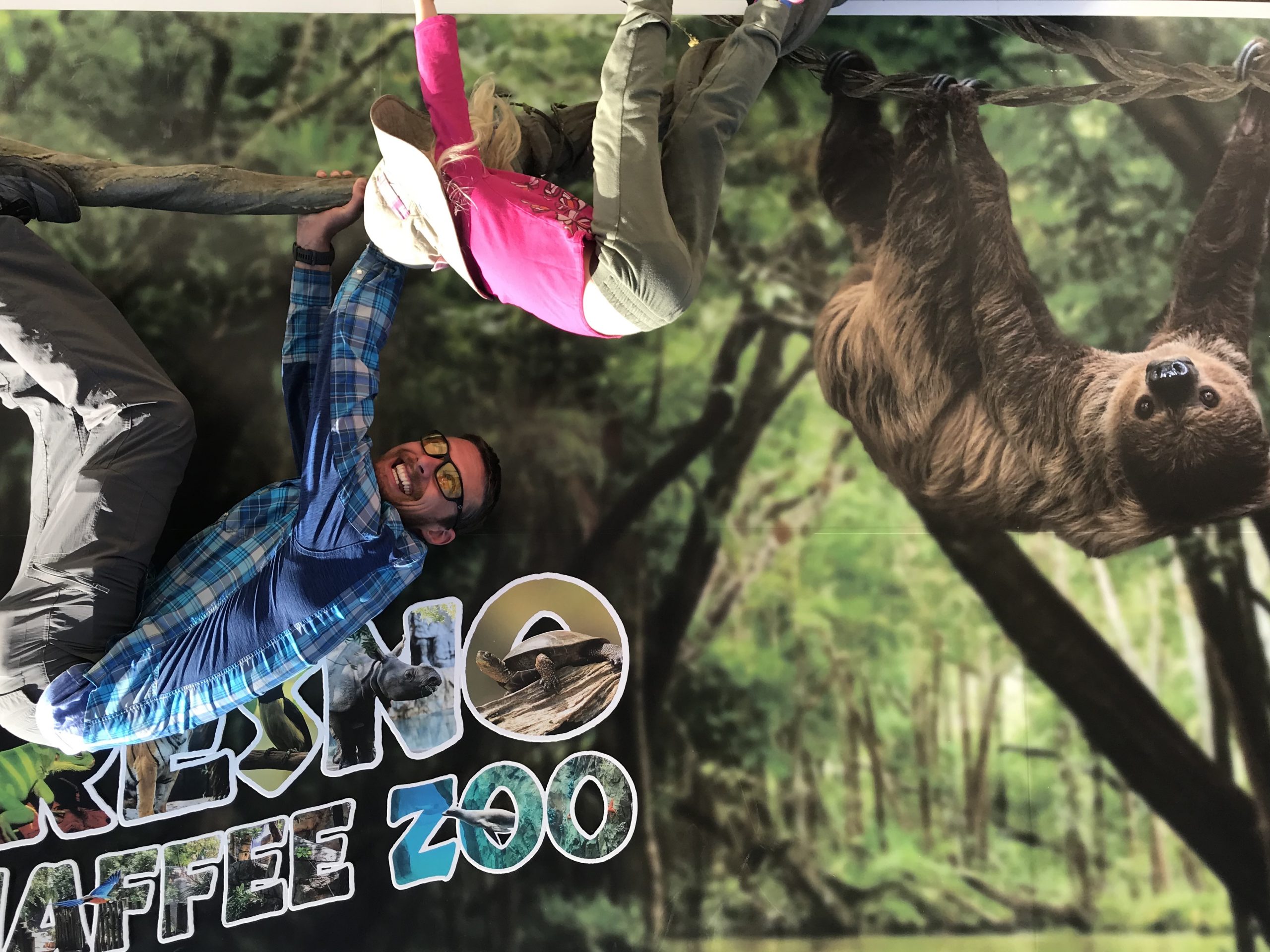 Fresno was a good location to land on our way home to Portland because of their zoo.  We didn’t want to spend a lot for camping which is a tricky task in CA so we chose to stay at the Fresno County Fairgrounds for $35 per night.

The reality was we were parked next to a giant row of dumpsters in a parking lot just on the other side of a chain linked fence from a busy road.

BUT, the neat thing was, these fairgrounds were decked out with tons of really neat things which we had access to since we were staying there.  It was like a giant play land they built to have their fair in!  We talked to the security guard and he told us when they aren’t holding their annual fair in October, they rent out the space for parties, weddings, business events, you name it!

There was a giant pirate ship, a giant tractor art tower, a scrap metal sculpture garden, decorated cars on roofs, a giant tree play structure and even a wine garden made from wine barrels and string lights up above.

It was also neat to have full access to all the barns and stalls where the animals are housed during the fair.  For security purposes some of the buildings were lit at night making for fun night time exploring.

Also, while we were here I looked out the window of the camper to see that our oldest started hobbling around ON HER OWN!!  Hurray!!  One step closer to full mobility!

Since through our Portland zoo membership we got 50% off admission to the Fresno Zoo, we decided to check it out.  We found that they have an awesome reptile exhibit!  They had so many creatures that I had never seen before and the habitats they had them in were really well done to mimic their natural environment.

There was one huge glass enclosure full of vibrantly colored poisonous tree frogs not much bigger than my thumb.  So neat looking and oddly geometric shaped.

The Komodo Dragon was also neat to see.  He came right up to the glass so we could see him close up.  I was very surprised to see that his eyes were very much like ours.  He didn’t have the classic slit or black bead-like eyes, they had a cornea and pupil just like ours.  This one in particular had very pretty green eyes.

Another really neat attraction were the gibbons and their new little baby (born Oct 5th 2019, so just a few months old when we saw her).  It was the most amazing adorable sight!  The sweet little one was clinging onto her Mama with those long spindly arms with such delicate fingers.  It seemed like whenever the Mama was ready to get up and move the baby would sense this and cling to her front.  We got to see the sweet little 4 month old nurse and attempt climbing.  The sweet little thing would try and fall, try and fall again with his Mama laying near her giving her a boost now and again.  I think I could have stayed there all day watching them.

Later on our walk we spied an alligator at the bottom of his swimming pool.  The girls wondered how long he could hold his breath.  I quickly looked it up and read that typically they stay under water for 20-30 minutes.  We were hungry anyway so the girls voted that we eat our lunch in front of the enclosure to wait for him to take a breath.  Well, after waiting a half hour I reread the information I had looked up and it turned out I should have read it better.  They stay under water for 20-30 minutes IF under distress.  This alligator was not in the slightest bit of distress.  In fact, the thing looked like a stone statue.  I read further that alligators have been known for staying under water for 24 hours or more without taking a breath!  We ended up staying about 40 minutes and saw one air bubble and called it quits.  Man, no wonder they are one of the closest animals to prehistoric times.  They are rocks half their life.

It was a nice zoo and we had fun hanging around for the day.