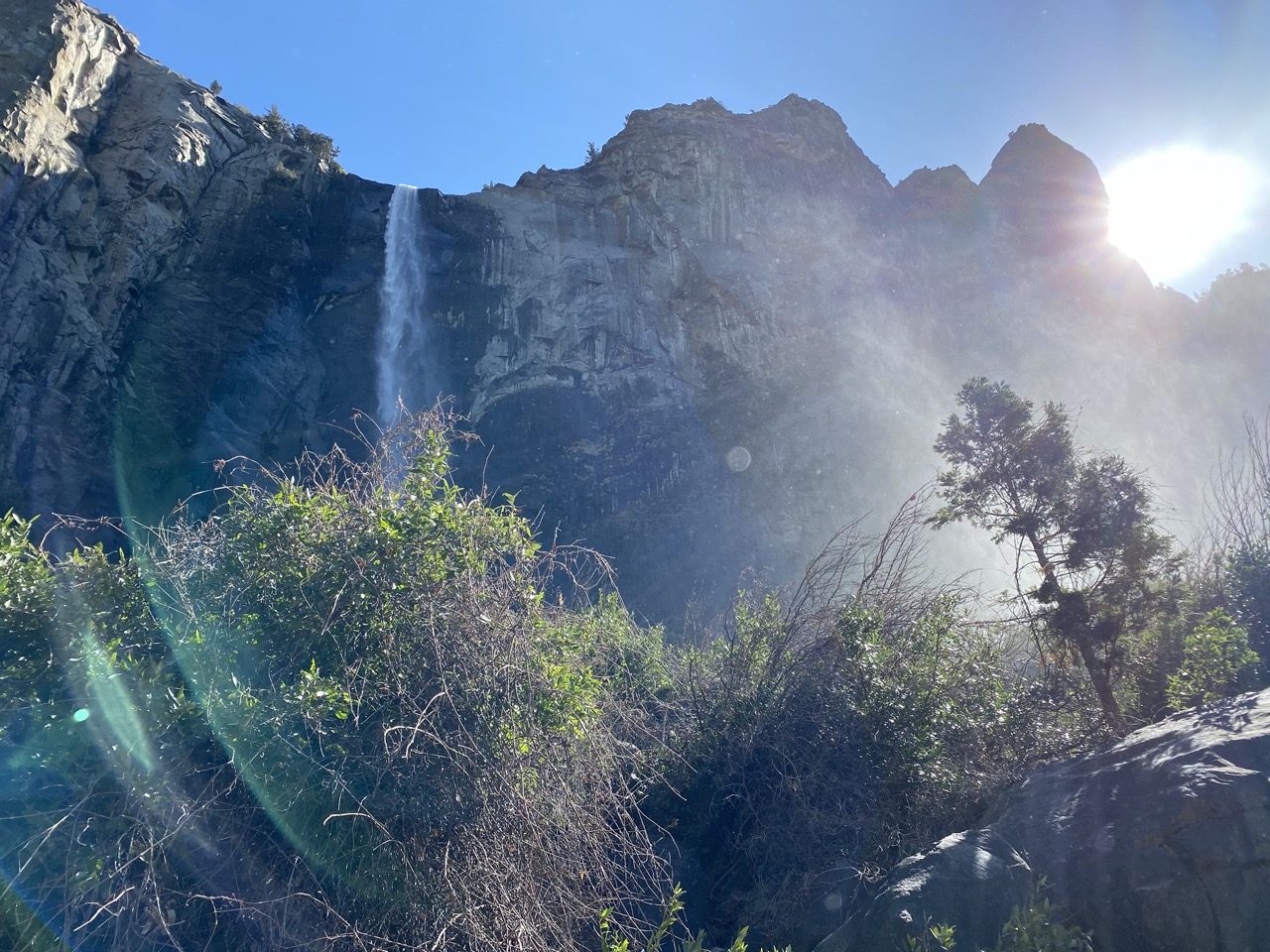 Justin and I had done a short Yosemite visit on our Honeymoon road trip and it was enough to put it on our list of parks to return to for future years.  Well, the year had come.  Unfortunately we weren’t ready for family hikes due to our oldest’s leg still healing but we had a great time none the less.

We ended up taking the south entrance on Route 41 in to Yosemite Valley and, oh my, was it a curvy one!  Our sweet little one, who normally doesn’t have a problem with car sickness, was on the verge of throwing up and was in tears on this road.  Justin ended up finding a pull over spot just in time!  We got out and stayed by the side of the road until she was feeling less nauseous and the color came back to her cheeks.  It was cold crisp air which helped her feel better quicker I’m sure.

Though nauseating, Rt 41 that led into the park was beautiful.  Sadly we had to pass by some really neat sights in hopes of getting a campsite within their first come first serve loop.  There was a phone number we called which updated us on the status of the campground space but there was no telling how many of those sites would fit something other than a tent camper.

We lucked out!  We got a spot in Upper Pines campground with woods in the back and giant rock cliffs surrounding us,  It was stunning, and chilly.  Those tall cliffs blacked all but 4 daily hours of the sunlight from the campground.

We also found that the previous camper had left 3 perfect poles for making a teepee!!

The shade from the tall trees in the campsite meant we weren’t getting any energy from our solar panels so we were trying to conserve as much power as we could.  Luckily we did have Azul out and about during the day generating some solar power which we could then transfer some into Wobbles.  This being said we tried to be crafty using the propane when we could substitute it for electricity, like for instance, using the stove to toast our bread rather than using our electric toaster.  It’s not a bad thing to force our brains to be creative.

The girls had SO much fun at camp climbing on downed trees, setting up a cozy space within the teepee, making “meals” from the wilderness and building rocket ships out of the firewood box.  Isn’t it great seeing little ones make so much out of so little?  Our girls definitely do better when they have a few “props,” such as a bucket and some rope and then a whole lot of wilderness.  We had all been missing the trees so much during this trip it was so nice to be surrounded by them again.

Both girls did a good deal of bike riding at the park as well.  There was a perfect camp loop that was blocked off to traffic for the season so the girls had full reign.  This was our oldest’s first time back on her beloved bike since her broken leg.  It was a process and she continues to be fairly unsteady with starts, stops and hills due to the pressure it puts on her leg but she did amazing!!  Our little one was excited to be biking with her sister again and we were all proud at her efforts on the bike.

With the girls on bike and Justin and I walking we could also get to the camp store as well as lots of places for the girls to play.  The girls were thrilled to cross a little stream over and over by scooting across downed logs.  It was a fun thrilling challenge.

We also found a rock that looked like a goat that the girls played on.  The rocks in Yosemite were so beautiful so many of them told a story.  I read that the really slick rock surfaces that we kept seeing and experiencing when the girls would try to climb them were created when glaciers slid over the bedrock.  Bedrock, sand and silt in the glacier polished the bedrock surface and is called glacial polish.

While the girls were doing their Jr. Ranger books, we all checked out the Visitor Center and museum.  We learned a lot about the Miwok people who have inhabited the now Yosemite N.P. land for over 4,000 years.  The park had a mock village set up and a museum so that visitors could learn about their culture.  The Miwok people made wonderful teepees made from the thick bark of the native pines, tying logs together with vines as the frame.

We also got to see a smoke house, acorn granaries, a ceremonial roundhouse and how the Miwok people’s teepee shelters turned into little cabins after adopting some of the white settler’s shelter building.  There were lots of positives and negatives the Miwok people experienced from white settlers moving into the same area.

The girls got to play a stick and dice game that the Miwok children used to play.  They had a great time playing it on the little bear skin that was laid out in a nook in the museum.  Definitely a game we’ll be playing back at home.  We also got a good look at some of the beautiful basket making techniques that were used by the Miwok people.

We also learned quite a bit about John Muir who through his love of the outdoors and deeply spiritual soul helped make Yosemite what it is today by being instrumental in convincing Teddy Roosevelt to preserve the land for future generations.  I would love to learn more about this interesting man myself.

It was perfect weather for a campfire which instantly triggered a craving for soup in all of us.  Our first night we spoiled ourselves with eating around a warm a campfire and eating homemade soup.

For dessert we had roasted apples on the campfire.  SO good!!  On our second batch we tried a chunk of dark chocolate on top of the roasted apples and that was good too.  Though, we all agreed that the apples on their own were the best.  We were all a chocolaty mess with the others.

The teepee made for a perfect little nighttime reading nook for the girls while Justin and I sat by the campfire. The teepee looked like such a cozy little spot to be.

The next morning Justin got up to do a morning run and ended up hiking up the Mist Trail to Nevada Falls.  This is actually one of the only hikes Justin and I did on our honeymoon but at that time of the year it was so hot we dipped our heads in the freezing stream at the top.  Justin was sweaty when he got back but I don’t think he had any urge to dunk his head at the top in February.  Justin said he was the first one on the trail that morning but ended up seeing about a dozen people coming up as he came down.  He took some pictures and boy, what a pretty view!

While Justin was gone the girls and I geared up for the day and went for a morning bike ride to get us warmed up for our short hike to Bridal Veil Falls.

The Bridal Veil Trail was a 1 mile round trip there and back hike.  It was a really pretty walk along the stream that was coming from the falls.  We knew we were getting closer to the waterfall when our oldest noticed “rain” in the air.  It was as if it was a light sprinkle as we neared the waterfall from all the mist in the air.

From some angles when the sun reflected off the mist it appeared as though it were snowing which made it feel magical.  This constant mist made the rocks around very slick.  There were signs everywhere warning people not to climb the rocks as they are slippery, though handfuls of people were still doing it and we watched 3 fall during our short time at the view point.  The signs are there for a reason folks!  It was such a lovely hike and our oldest made it walking the entire time!  It was slow going for sure but it was great to be out hiking again after such a long time without it.

The next day we decided to do another 1 mile hike but this time it was a loop trail to Yosemite Falls.  The part of the loop from the parking lot to the first view point was quickISH with all of us walking with our own two feet.  However, then the girls saw big rocks to play on so we took a pit stop.

Well, this pit stopped ended up lasting about an hour!  Ha!  The girls were having a ball and we didn’t have the heart to interrupt all their fun.  After all, we were getting a great view and time to chat with each other while the girls played.

They climbed the rocks, practiced hitting pine cones with sticks like baseball bats (luckily they have my arm so far therefore it wasn’t dangerous in the slightest) and played house where they created ovens and cooked all kinds of tasty food.  In their play our little one ended up getting 21 splinters in her fingers!  Luckily she is pretty easy going when it comes to things like that and didn’t make a peep while I pulled them all out.

By the time we finally wrapped things up with the girls play our oldest’s healing leg was too tired to go on the hike so Justin and I took turns carrying her on the trail.  For a couple yards both girls got a daddy ride!

The falls were beautiful!  It always seems so neat seeing a waterfall seemingly come out of the middle of a giant bounder.

On our way out while Justin was at the dump station the girls and I went down to the water within sight of the station and had a grand time.

Even the dump stations have a view in Yosemite!  We climbed along the rocky river banks and watched as things floated downstream noticing the current and what effect the water flow had on the landscape and surrounding life.

Yosemite is such a beautiful place and will be on our list of places to go again for sure.