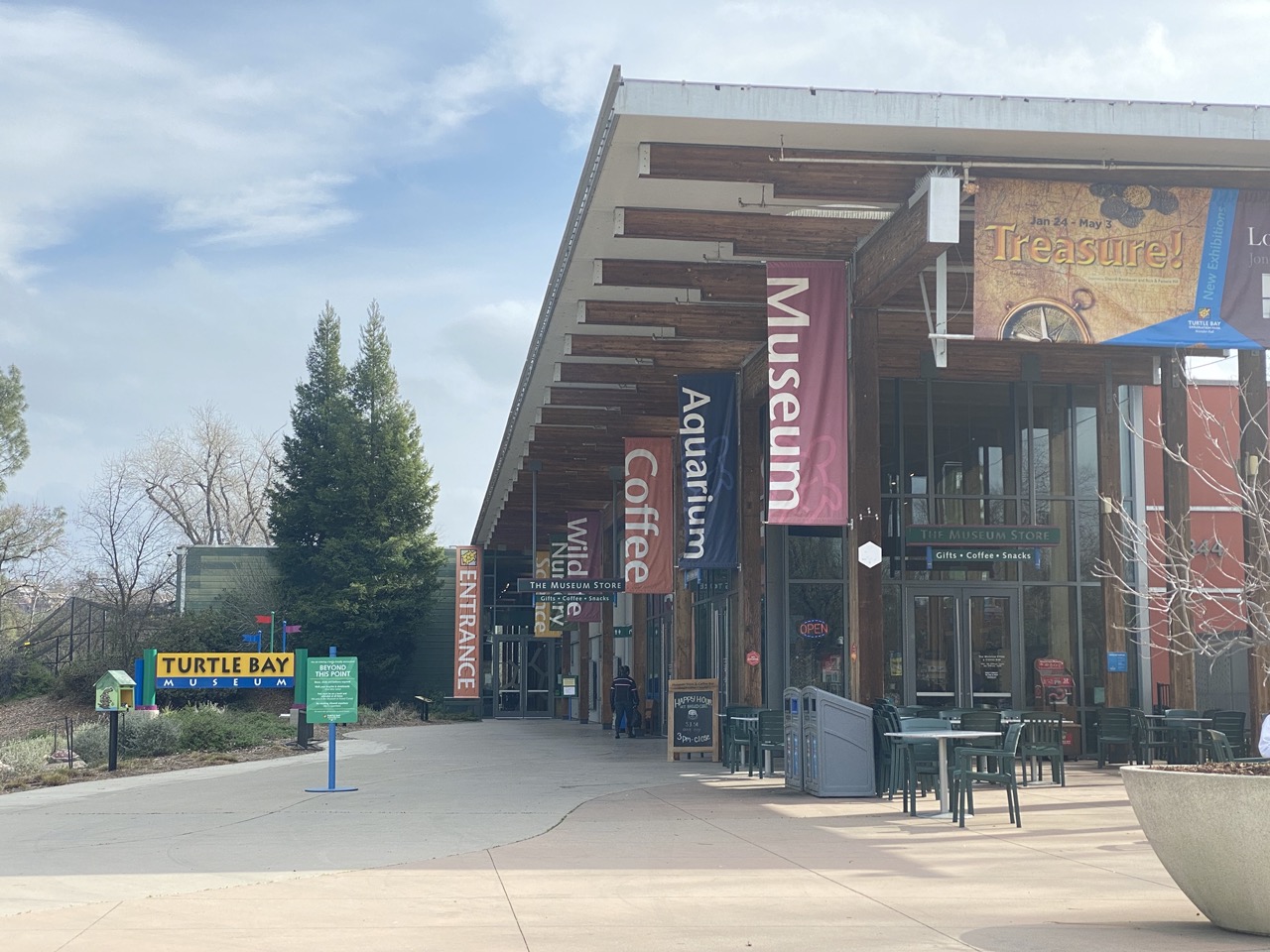 Let me just say that this place is awesome!!  If you are ever in Redding, CA this is a place you can’t miss.  The place was so large we didn’t even get to see it all with a whole day of exploring.  Turtle Bay Museum is a mini aquarium, zoo, science center, history museum, botanical gardens and playground.

We were told by staff that the lorikeets within the bird exhibit take a nap for a couple hours in the afternoon so we decided to start there so we didn’t miss seeing them.  What lively birds they were and boy were they loud!! Granted there were dozens of them within the walk-through enclosure but it was all I could do to resist covering my ears from their squawks.  I can’t imagine having them as a pet.  They are beautiful to observe outdoors.

You could pay $1 to feed the birds nectar from a cup and they all were well aware of this treat.  As soon as it was poured they all flew over guzzling it down between breaks to use the bathroom.  Luckily for me they had a good backward squirt action therefore I didn’t get pooped on.  One landed on Justin and he didn’t even have food.  The girls were awed just looking at them but didn’t quite care to have the birds sit on them.  It was a fun experience!

We were lucky enough to get to the animals just as a keeper was feeding them!  Justin and our youngest watched a fluffy skunk and porcupine waddle out of their dens to enjoy their meal.  There were red and grey foxes which are so small and sweet looking, a bobcat which we found looked like a very large house cat with a short tail (the girls wanted one as a pet!), a barn owl and a handful of others.

It was neat to see the barn owl silently swoop down and grab its mice lunch and then swallow it whole.  You don’t get to see that everyday.

The playground was a good one.  Our youngest usually gravitates toward the swings.  This time the scenario went like this: “Dada push me higher!  Higher Dada!! …crying after she fell off the swing “Dada, you pushed too hard.”  Oh dear.  Thankfully just a little bump.

Most of the time the girls were on the playground they were taking turns on the zip-line.  It was a blast!  Grownups could go on it too so when our youngest didn’t want to go on alone she went down on my lap.

It was really fun and quite the abrupt ending when you hit the stopper at the end.  Justin got to go down with our youngest as well. At the very end our youngest worked up enough courage to go down the zip-line herself. Then it was hard to get them both off! Such fun!

Inside the museum the girls enjoyed watching fish, an otter, turtles and ducks play in the various tanks they had.

They also had fun building with foam blocks and checking out how the culture of the surrounding CA area had changed over time.

A neat thing that I had never seen before was an indoor beehive that you could see how the same bees interact outdoors as well.  They had a camera on the outside of the building where the bees entered through a tube leading into their glass sided hive.  It was so interesting to observe them in their hive.

Lastly there was a treasure discovery room where kids could interact with things related to treasure.  One of my favorites within this room was being able to remote around a mini submarine camera.  We imagined we were searching for buried treasure on a sunken ship.

There was a pit filled with tire shreds with metal objects hidden below.  The girls were given metal detectors and set to the task of finding “treasures.”  The museum was smart and had the metal items anchored to the floor so other kiddos could find them too.

There were parts of the museum that we missed but we were wanting to get on the road semi-early since we didn’t quite know where we were going to camp that night.  But, before leaving the area we did a quick walk across the glass suspension Sundial Bridge.  When Justin first told me about a glass bridge I was quick to say, “No way!”  Then I saw pictures and decided it looked safe enough.

However, walking over it and looking down at the crossbars below our feet through the glass was a weird feeling.  Looking through the holes in the glass made for the giant cables at the water below was definitely a strange feeling as well.

This place will be on our list of places to visit again for sure!