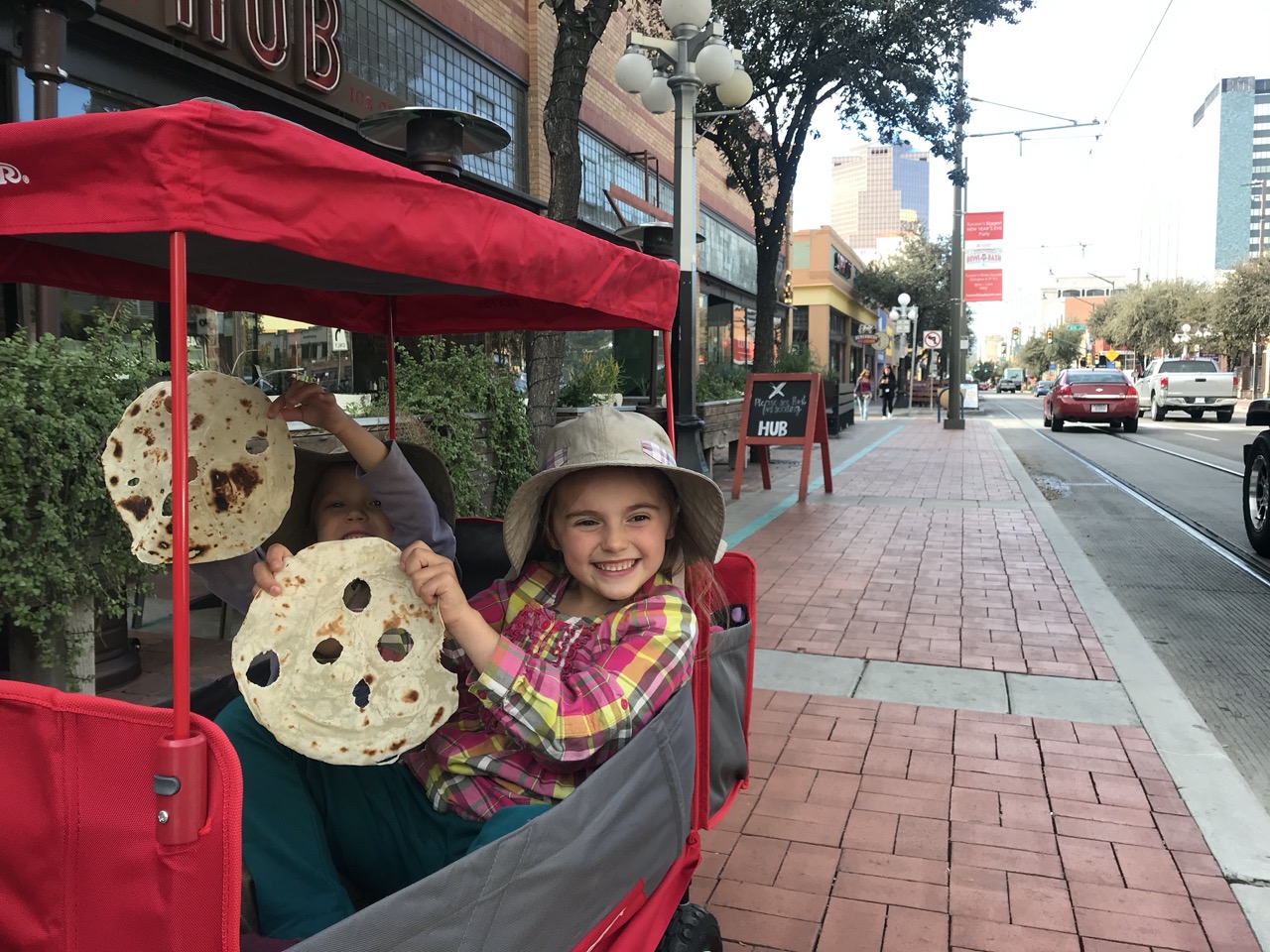 We decided to stick with our original plan and meet up with some of the Fulltime Families before the planned rally. We thought it might be helpful to start off in a smaller more intimate setting so we could get to know people a little better.  All of us were also adjusting to our oldest having a broken leg.

The first day with a cast we spent playing board games, making sock gnomes and playing figurines.  We all had fun yet were all very ready for bed that night.  Our oldest and I slept out In Azul again while she was getting used to her cast.  The night wasn’t without painful wake-ups but by the next night she was ready for her bunk.  This made me nervous and I was up all night adjusting her and padding around her but she mostly slept fine.

We ended up moving from the BLM land outside Tucson to an RV park in Tucson called Sentinel Peak RV Park for two nights to meet up with same Fulltime Familles, have access to washers and dryers and water hook ups as well as have easy access to the city.

As it turned out our favorite place we ate last time we were in Tucson, Seis and La Estrella Bakery were just a 15 minute walk from the RV park!

After a day of chores we decided to head over to La Estrella Bakery and Seis and ended up spontaneously hoping onto a festive street car!  We had no destination in mind but were all having fun with the experience of the street car which was very familiar to the one in Portland.  A woman on the train gave us some recommendations of thrift stores and fun places to walk.

We munched on our fresh tortillas from the bakery as we explored by foot the recommendations the local had graciously given us.  It was so fun!!  It was fun because it was spontaneous and the streets we were exploring were really fun!

We even watched as a mural was being created.

We ended up finding a Good Will that sold all their children’s clothing for $1 each!!  Isn’t that crazy awesome!!  So, we found the girls a couple new dresses, one of which our oldest was so excited to be able to buy with her own money, and I even found a shirt for myself on the kids rack.  Score!  Justin hunted around and found two wacky Christmas shirts for us to wear to an ugly Christmas sweater party we found out was going on at the family rally we’d be attending.  We also came upon a store that sold tie dye stretch pants (I had regretted not buying some at OR Country Fair).  I think Justin and I were both glad I could upgrade my PJ pants. 😉 It was such a fun unexpected afternoon.

We spent the rest of the day playing in the game room of the RV park we were staying at.  It was like a big warehouse type of building with a pool table, ping pong, corn hole, puzzles, foosball, board games and more.  It was so fun for the girls and I enjoyed seeing them happy.

Our oldest came down with Justin’s cold that afternoon so it was a lounging rest of the evening.   From Tucson our next stop was to be Yuma AZ in preparation for the Fulltime Families Mexico Rally.